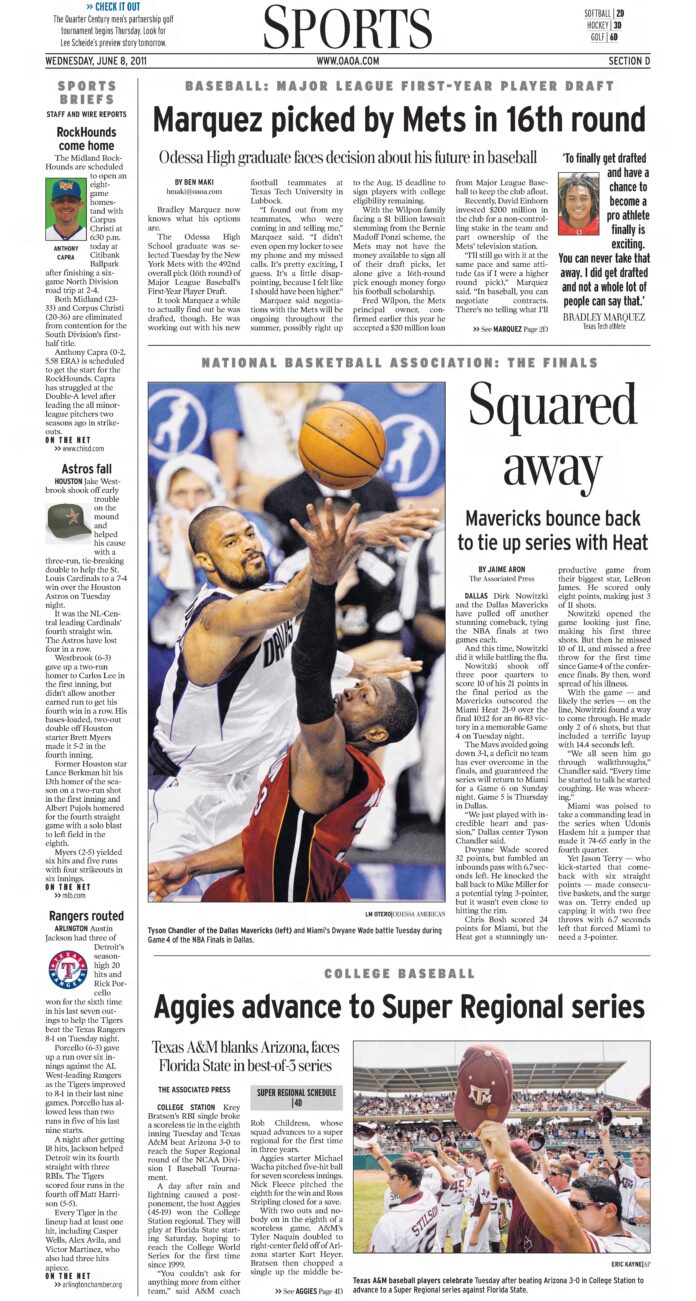 >>1966: The Permian baseball team was preparing to compete in the Class 4A state tournament in Austin. Coaches Johnny Crouch and Jim Bone led the Panthers to a District 2-4A championship and postseason wins over El Paso Jefferson and Grand Prairie to secure a spot in the state competition. Permian was slated to face Brazosport, which held a 31-8 record and was picked by experts to win the state title. Permian had a 21-5 record and won 12 of 14 district games.

>>1979: Kermit advanced to the Class 2A state baseball championship behind pitcher Monty Wrenn. The pitcher threw a three-hit shutout to defeat LaGrange 5-0 and set up a matchup with East Chambers at Dische-Falk Field in Austin. Wrenn picked up 13 wins in 16 tries on the mound. … The Pecos baseball team fell short of the Class 3A state title game after a 5-2 loss to Cleburne in Austin. It was the fifth time the Eagles had advanced to the state tournament and missed out on a championship.

>>1999: Texas Tech and Reagan County High School graduate Alicia Thompson was released by the New York Liberty. The Liberty drafted Thompson in the inaugural WNBA Draft before the 1996 season. Thompson was named the girls MVP of the Odessa American’s first All-Permian Basin Basketball team before her graduation from Reagan County in 1994. She averaged 1.6 points and 1.3 rebounds per game in New York. … Permian graduates Toby Stevenson and Jason Prann made big impacts in separate NCAA track and field competitions. Stevenson represented Stanford at the Dvision I Outdoor National Championships, placing second in the pole vault after clearing 17 feet 10.50 inches. Prann represented Abilene Christian at the Division II Outdoor National Championships, taking third place in the 400-meter hurdles.

>>2011: Odessa High graduate Bradley Marquez was drafted by the New York Mets in the 16th round of MLB’s First-Year Player Draft. Marquez found out he had been drafted when his Texas Tech football teammates told him during workouts. The multi-sport athlete said he would negotiate his contract with the Mets over the summer, up until the Aug. 15 deadline to sign players with college eligibility. … Dirk Nowitzki battled the flu and helped the Dallas Mavericks pull off a Game 4 comeback to tie their NBA Finals with the Miami Heat at 2-2. Nowitzki scored 21 points in the contest, while Miami’s LeBron James made just three of 11 shots to score eight points.