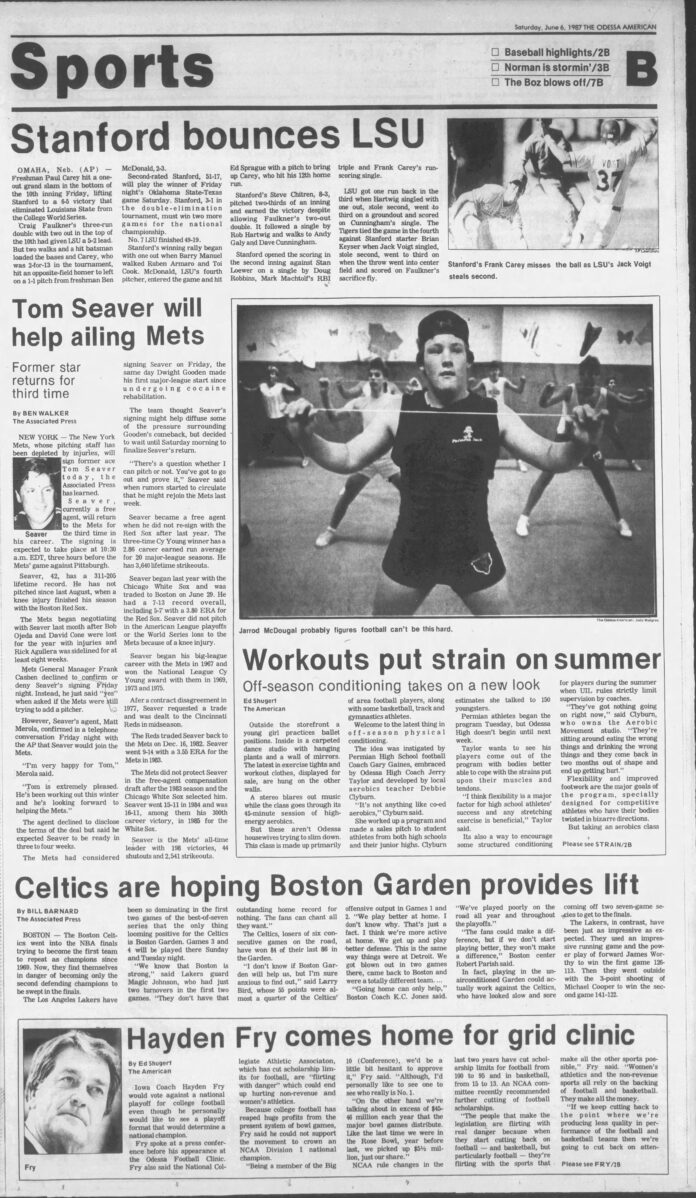 EDITOR’S NOTE: The Odessa American will feature some historical highlights for those of you having sports withdrawal during the summer. Happy reading!

>> 1965: The Odessa High baseball team saw its season end with a bi-district round loss to El Paso Austin at home. … El Paso Austin centerfielder Rudy Madrid made the biggest impact with his offense and defense throughout the final contest of a three-game series. … With the Bronchos leading 1-0, Madrid scored the tying run off a sacrifice fly in the sixth inning. … He followed that up by scoring again in the eighth and catching a line drive from Odessa High’s Ernie McReynolds in the bottom of the frame to give his team a 2-1 victory.

>> 1987: Odessa High graduate and Iowa football coach Hayden Fry returned to Odessa to lead a football clinic. … At a press conference, Fry spoke about how he would vote against a national playoff to determine an NCAA Division I national champion. … He said he would have liked to see the tournament format to determine who the true No. 1 team was, but feared the setup would hurt non-revenue and women’s athletics. … Fry hosted the clinic in Odessa to meet with coaches from Texas, New Mexico and Oklahoma to find out if they had any promising upcoming prospects.

>> 1996: Odessa College baseball’s Mick Pageler and Tony Johnson were set to start their professional baseball careers after signing with MLB teams. … Odessa High graduate Cody Allison would also move on to the next step. … Pageler was drafted by the San Francisco Giants in the 15th round of the amateur free agent draft, while Johnson signed with the New York Mets. Allison, who played collegiately at Odessa College and Arkansas State, was taken in the 13th round by the Cleveland Indians.

>> 2013: Monahans’ Kahlil Cooper accepted a scholarship offer to run for the South Plains College track and field program. … He planned on running the 400-meter and other events for the Texans, who had one of the top track and field junior college teams in the nation. … Before signing on, Cooper had won the Class 3A state championship in the 400. … South Plains College coach Chris Beene spoke with Cooper after he won and said he had the potential to become a national title contender.