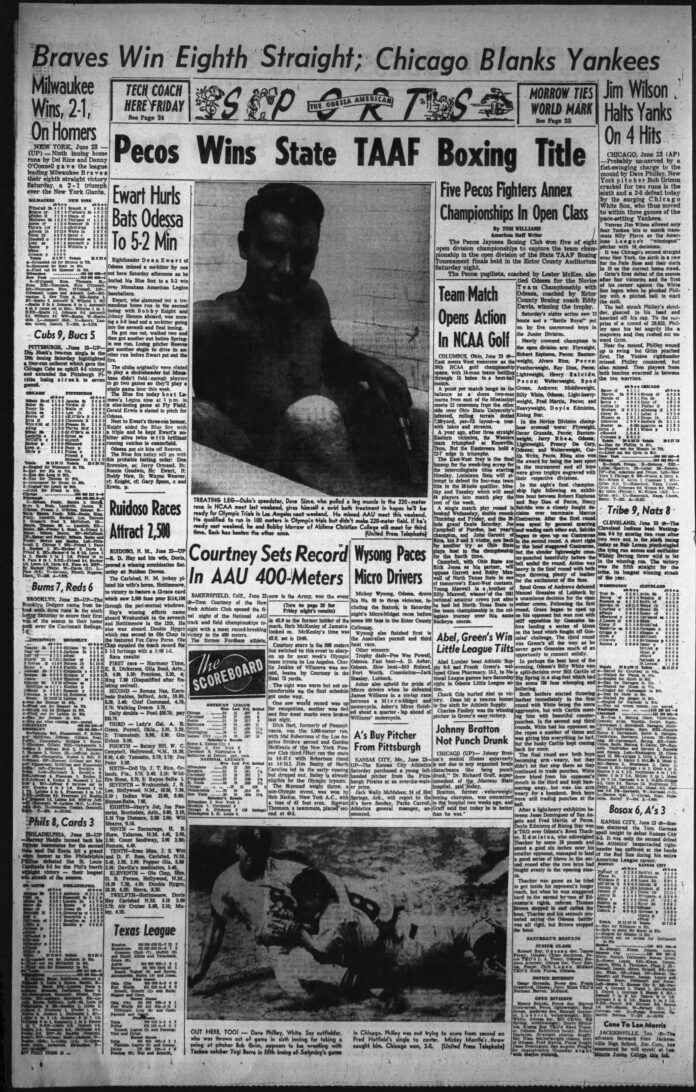 >> 1956: The Pecos Jaycees Boxing Club won five open division championships at the TAAF Boxing Tournament finals at the Ector County Auditorium. The results helped the team coached by Lester McKee to a team championship. Pecos also tied with Odessa for the Novice Team Championship. … Dean Ewart of Odessa narrowly missed a no-hitter as his Blue Sox picked up a 5-2 win over the Monahans American Legion. Ewart hit a three-run homer in the victory.

>> 1982: Ruben Munoz from Odessa was set to box former world champion Art Frias for the United States Boxing Association lightweight title in Atlantic City, New Jersey. The next step after that match would be to compete for the World Boxing Association title, which was held by Ray “Boom-Boom” Mancini. … The El Paso Diablos needed to rely on an emergency pitcher as their bullpen was depleted against the Midland Cubs. Infielder Mark Johnston came on in the bottom of the seventh inning in a game the Cubs won 20-8. It was Midland’s fourth straight win.

>> 2001: Christensen Stadium in Midland was set to host its final season of minor league baseball. The Midland RockHounds were set to move to a new location off Loop 250 and Highway 191, now known as Momentum Bank Ballpark. The former stadium was the home of the rookie league teams for the Cleveland Indians and Milwaukee Braves before housing the Midland Cubs, Angels and RockHounds. … Odessa’s Larry Nunez was tied for first place with Abilene’s Conway Jordan at the Men’s West Texas Golf Association Championship at the Odessa Country Club.

>> 2012: Former Odessa Jackalopes goaltender Connor Hellebuyck was selected in the fifth round of the 2012 NHL Draft by the Winnipeg Jets. He was the first player in franchise history to be selected in the league’s draft. Hellebuyck joined the Jackalopes before their first season in the North American Hockey League, becoming a top goaltender in the process. … Taylor Ochs and Abby Behrens won scholarships at the Eighth Annual Dr. Daniel Cepero Memorial Track and Field Meet. Both received a $1,000 scholarship after running at the event. Ochs planned to attend Abilene Christian University while Behrens was set to attend Texas A&M.