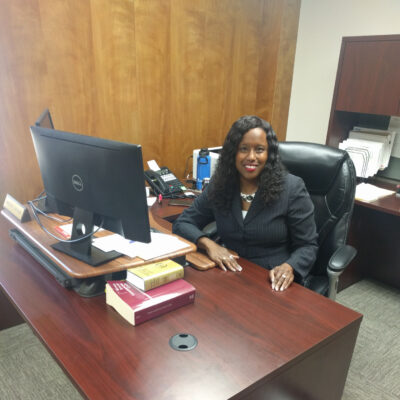 Odessa City Attorney Natasha Brooks on Tuesday night accused the Odessa American of intentionally casting her in a negative light because she is a “Black woman.”

Brooks made her comments following Tuesday’s City Council meeting. She refused at the time to provide the OA with a copy of an independent audit of the city’s finances or disclose how much the city plans to pay three Midland-based law firms the council voted to hire to defend them in their ongoing open records lawsuit brought by the Odessa American.

Both the audit and the cost of the law firms, which will be paid by taxpayer dollars, are considered public information.

As the city’s Director of Communications Devin Sanchez began explaining Brooks’ decision for refusing to release the information, Brooks rushed out of a nearby elevator and confronted an OA reporter about the OA’s treatment of her.

“The OA has always been hostile towards me,” Brooks said. “I’m the first Black female attorney for the city of Odessa, probably the first in West Texas, but they’ve never written a story about that.

“They’re never written anything positive about me. They’ve always attacked me, misquoted me; written things about me that are untrue. You have no idea how hostile they’ve been towards me.”

Want to read the feature story on Brooks?
>> Click here

Contrary to her allegations, after Brooks was appointed as Odessa’s new city attorney in 2019, the OA published a feature story and photo highlighting her many accomplishments and featured glowing comments and praise from several sources.

Asked Tuesday night to provide examples of inaccurate quotes or information attributed to her, she said that the OA falsely accused her of making the recommendation that the council hire the three law firms on Tuesday.

“That’s the council’s decision,” she said.

After the OA reporter and Sanchez pointed out that Brooks’ name appeared on documents as the staff person recommending that the council hire the law firms, Brooks expressed surprise that those documents could also be viewed by the public.

When Brooks was asked if she had ever contacted the OA to point out that she was misquoted, she responded, “I don’t even bother. I know how the OA works.”

The encounter came following the city council meeting, during which the council voted 6-0 on Tuesday to hire the law firms of Cotton Bledsoe Tighe & Dawson, PC, Brockett & McNeel LLP and Keith Stretcher.

During the past 508 days, the city has spent more than $112,000 to fight a lawsuit brought by the OA to enforce the state law that guarantees the public’s right to see basic police records. That does not include the cost of hiring the three new law firms. The city hired an Austin law firm to represent them and paid them more than $112,000 last year before cutting ties with the firm during the heated city council races.

“The City of Odessa remains committed to protecting citizens’ rights. In furtherance of that commitment, the City has retained outside counsel to defend its actions and represent its interests in this lawsuit. These Permian Basin attorneys have vast experience in municipal public information matters and litigation. The City of Odessa looks forward to the public hearing the facts of the case and will continue to work tirelessly to protect your rights and keep your information confidential.”

The OA lawsuit seeks to force the city to release public information in a timely manner without redactions that are not allowed under Texas law. The OA has not sought “confidential” information.

Meanwhile city officials and elected officials have repeatedly mischaracterized the lawsuit as the paper’s attempt to publish the names of minors who are victims of crime and those of sexual assault victims.

On Tuesday, the council voted to adopt the audit findings of an independent audit conducted of the city’s 2019-2020 fiscal year, which concluded Sept. 30, 2020.

The independent audit was conducted by Midland-based Weaver and Tidwell, LLP, which gave a short presentation of their findings on Tuesday, which was similar to a presentation they gave to council during their June 15 work session.

Overall, the city received “clean” or high marks in their audit, which revealed that the city is financially “very healthy,” auditors said.

But auditors did cite one “significant discrepancy” discovered during the city’s audit – they initially couldn’t find about $200,000 in the city’s record books.

Assistant City Manager of Administrative Services Cindy Muncy previously explained that the money was there, but due to a technical glitch the auditors did not see it.

The auditors noted they also discovered several minor financial record-keeping discrepancies, but agreed with Muncy that the errors were due to a new accounting system that the city installed in October 2019.

The city was not penalized for any of the errors, but auditors encouraged city officials to work with the company they purchased the system from to make sure the errors don’t occur during next year’s audit.

The city ended the 2019-20 fiscal year with a $105.9 million balance in its general fund and boasted a healthy $24 million in its fund equity, which is also referred to as its contingency savings account.

Last week, the OA filed a Freedom of Information request seeking a copy of the report that included the auditor’s findings and the city’s response, a document that is also considered a public record once council receives it and votes to adopt it. As recently as Monday city administrators and staff had promised a copy of the report would be provided on Tuesday.

Brooks then claimed that auditors for Weaver and Tidwell advised her that legally the city couldn’t release any audit reports until the auditing company gave the city permission.

She said she would have to “redact” any information that she deemed not legal for the OA to see. She could not give any examples of what information that might be included in the audit or reports that would not be legal to share with the paper.

“As the city’s attorney, I have the right; it’s my job to make sure anything that the OA requests, that I review it first to make sure there is nothing in those documents that shouldn’t be shared.”

Lastly, Brooks claimed that the city has 10 days to provide any documents requested through FOIA. It’s an argument that Brooks has repeatedly made for the past year.

Kelley Shannon, executive director of the Freedom of Information Foundation of Texas, on Wednesday said Brooks is still wrong.

“Governments are supposed to provide public information to requestors promptly – without delay,” Shannon said. “Though a government may take a reasonable amount of time to gather the requested information, if it’s already available or quickly available they can’t just sit on it. The information belongs to the public and must be handed over right away.

Shannon pointed out the description of the law is also spelled out the same way by the office of the Attorney General of Texas.