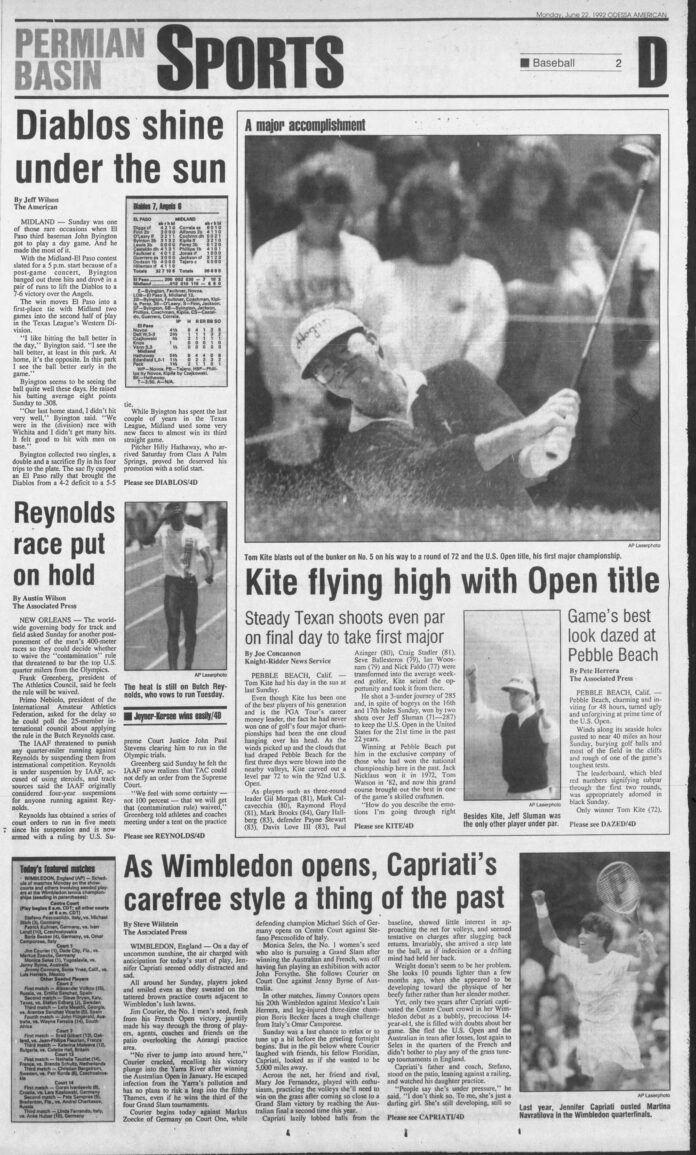 >> 1971: The West Texas PGA Junior Golf Tour was reaching the halfway point of its 34-stop schedule and planned to host two events in Odessa. The tour stop would start at Odessa Country Club and finish at Golden Acres Country Club. Over 50 golfers were expected to compete in the event. … Stanford quarterback, and No. 1 draft pick, Jim Plunkett was set to play in the 11th Coaches All America football game. The game would be nationally televised and would take place at Jones Stadium in Lubbock.

>> 1992: The El Paso Diablos came away with a 7-6 victory against the Midland Angels, moving the teams into a first-place tie in the Texas League’s Western Division two games into the season’s second half. John Byington had a strong showing against Midland, raising his batting average to .308. … Texan Tom Kite won the U.S. Open with an even-par 72 on the last day of the competition. His win in Pebble Beach, California added him to an exclusive list of winners with Jack Nicklaus and Tom Watson.

>> 2008: Siblings Lloyd Hill and Roy Williams reunited in Odessa to play in the 25th annual Juneteenth basketball tournament. Although Hill didn’t originally want to make the trip from Dallas to Odessa, Williams convinced him by paying for his flight and offering a dinner from Taco Villa. Both siblings were standout wide receivers at Permian. … The Odessa Roughnecks clinched a postseason berth with a 59-50 win over the Fairbanks Grizzlies. DeWayne Hogan rushed for two touchdowns and Permian graduate Ryan Havens hit two second-half field goals to seal the win for Odessa.

>> 2018: Bart Oliva and Shawn Reimold were facing off in the Sanders Division Final of the 2018 North American One-Armed Golfer Association Championship at Odessa Country Club. Reimold booked his ticket to the final after defeating Bruce Hobbs and Oliva moved on with a win over Musa Pam. … France was looking strong in the 2018 FIFA World Cup, advancing to the round 16 with a 1-0 win over Peru. At 19 years old, Kylian Mbappe was making a name for himself by scoring the winning goal for the eventual champions.