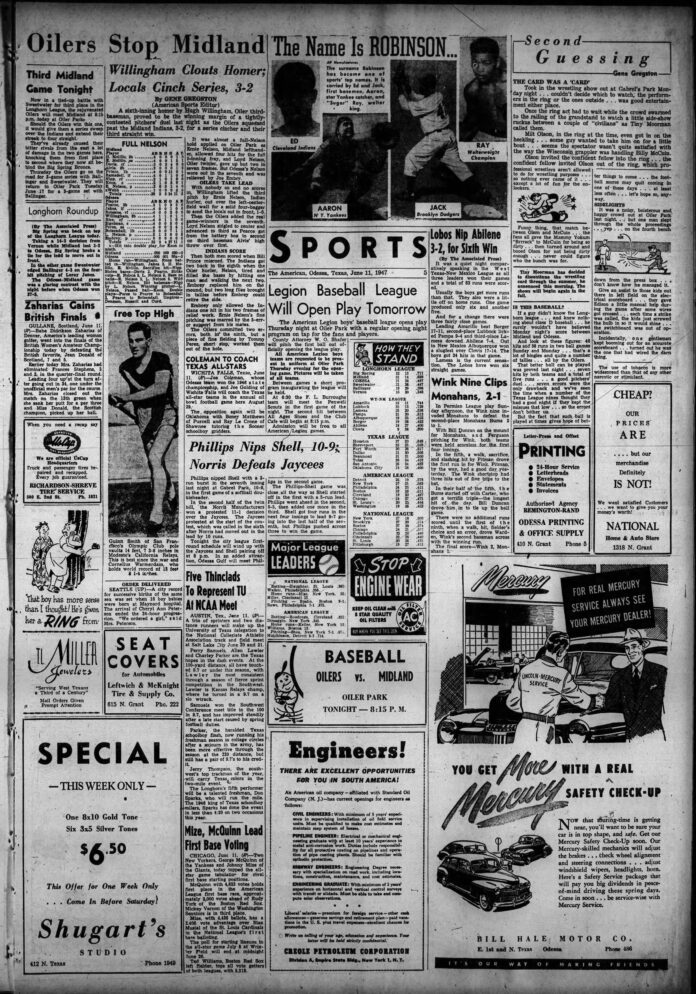 >>1947: The Odessa Oilers came away with a 3-2 win in a pitcher’s duel against the Midland Indians. Odessa’s Loyd Nelson surrendered two hits in seven innings before he was relieved by Joe Embry. Midland’s Ernie Nelson pitched a complete game where he allowed four hits. The Oilers secured the win after Loyd Nelson hit an RBI single in the seventh inning. … Odessa High football coach Joe Coleman and Joe Golding from Wichita Falls were set to coach the Texas all-star teams in the oil bowl football game in Wichita Falls.

>>1977: The Pecos baseball team fell 9-1 against Uvalde in the finals of the Class 3A state baseball tournament. It was the first time Pecos had advanced past the state semifinal round after reaching the tournament for the fourth time in five years. The Eagles were without pitcher Linvel Mosby, who was a two-time District 2-3A most valuable player award. It was the first time Uvalde advanced to the state tournament.

>>1992: Odessa College golf sat in second place at the NJCAA Men’s Golf Championships after two rounds. A 6-over-par 294 moved the Wranglers into second behind Florida Community College. … The Midland Angels suffered a 3-2 loss on the road against the El Paso Diablos. A shallow fly from Craig Faulkner that dropped in front of Midland’s centerfielder helped El Paso bring in the winning run in the ninth inning. … The Portland Trail Blazers overcame a slow start to even their NBA Finals series with the Chicago Bulls at 2-2.

>>2014: Odessa College athletic director Wayne Baker selected Kurtis Lay to take over the school’s baseball program. Lay, who previously coached at Frank Phillips College, replaced Brian Blessie. … The San Antonio Spurs built on a big first half lead to take a 2-1 NBA Finals series lead over the Miami Heat. Kawhi Leonard scored a then career-high 29 points, followed by Danny Green and Tony Parker who had 15 points each. … The United States men’s national team was preparing for the 2014 World Cup in Brazil. They had the lengthiest group stage trek among all 32 teams competing, with 8,800 miles traveled through for their matches against Ghana, Portugal and Germany.