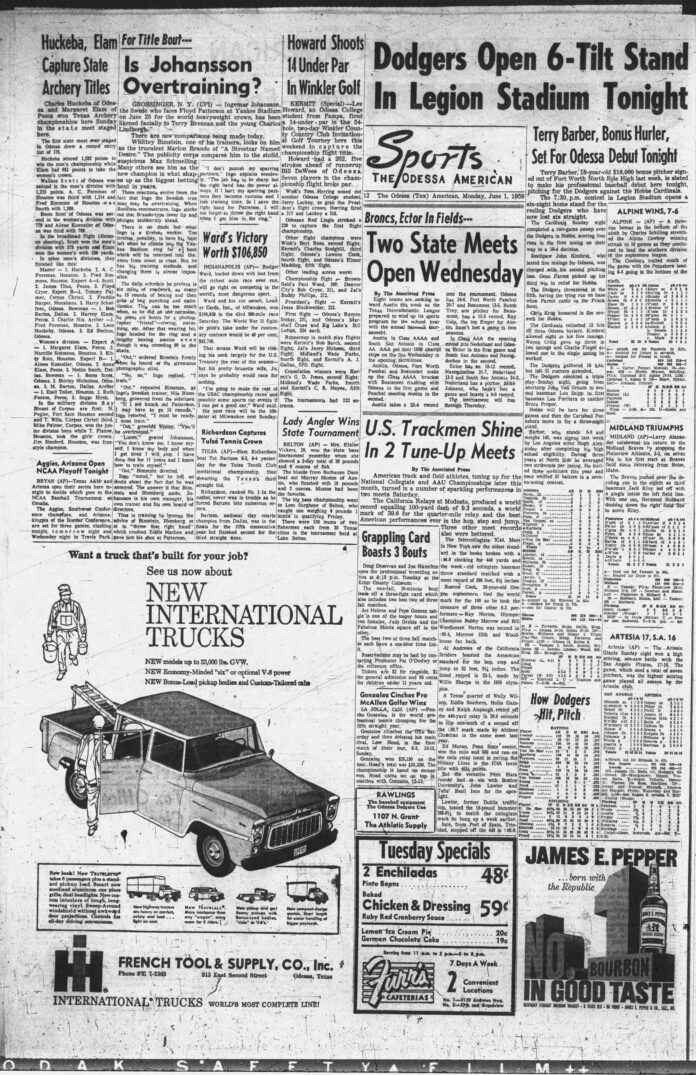 >> 1941: The Crane boxing team coached by Orville Howard drew a large crowd after hosting an amateur fight night in Crane. The squad was headlined by Manuel Alvarado, Leon Drake and Kenneth Miller from Odessa. San Angelo’s Bill Quinlin got the event started with a technical knockout victory over Crane’s Malcom Hamm, who was described as a willing mixer who lacks experience in the ring. The city of San Angelo was well represented at the event, as it had five boxers secure wins over opponents from across the area.

>> 1959: Odessa High and Ector High advanced to the state baseball tournament, along with six other teams. The Bronchos were in a Class 4A bracket with Austin, Fort Worth Paschal and Beaumont. Odessa High went into the competition with a 24-6 record and was set to play Beaumont in its first game. … Ector was in the Class 3A bracket with Nederland, South San Antonio and Nacogdoches. At 18-12, Ector was set to face Nederland in its opening round matchup. Beaumont pitcher Butch Troy would go into the tournament with a 13-3 record on the mound, while Nederland pitcher Mike Johnson held an undefeated mark at 9-0.

>> 2007: Odessa High’s Daniel Rivas was set to face off against teammates Mason Munguia and Darrell Gibbs in the West Texas Football Classic at Lowrey Field in Lubbock. Sixty-two schools were represented at the game, which benefitted players who suffered debilitating football injuries in their playing careers. Rivas was on the North team, while Munguia and Gibbs were on the South team. Permian’s Stephen Boyles, Robert Murry, Ammad Quigley and LaVorick Williams were also on the South team led by then-Permian head coach Darren Allman.

LOOKING BACK for June 19