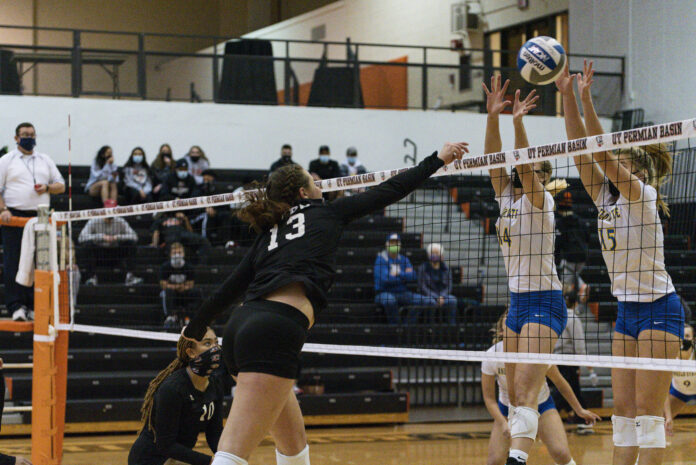 The UTPB volleyball team opened its abbreviated season against a formidable Angelo State University team that is expected to battle for the Lone Star Conference crown.

The Falcons proved they could play with the Rambelles.

Now, they have to figure out a way to defeat them.

UTPB held leads in the first and third set, but Angelo State was able to use a strong service game and the left arm of Kailyn Gilbreath to earn a 25-19, 25-18, 25-11 sweep on Tuesday at the Falcon Dome.

Gilbreath had a match-high 14 kills to lead the Rambelles (1-0), with Sophia Berg adding nine. Setter Lindsey Ledyard finished with 25 assists.

Taurie Magee finished with eight kills to lead UTPB, with Isela Murillo chipping in seven in the loss, with Analise Lucio finishing with 20 assists.

The teams will meet again at 7 Wednesday evening in the revamped conference schedule that has teams playing in pods.

“I told the team I’m embarrassed for our passing and setting,” he said. “Normally that’s something we’re strong in and we were not tonight.”

UTPB opened the match by jumping out to a 8-5 lead the watched Angelo State claw its way back into the first set, taking 10-9 lead with libero Chloe Patton serving.

The teams traded sideouts until Gilbreath strung together five straight points from the service line, putting the Rambelles in control of the set at 20-16 before closing it out.

Angelo State was in control from the start of the second set, opening with a 7-3 run and keeping the Falcons at bay throughout.

UTPB responded in the third set, moving out to an 8-5 lead before Ledyard was able to Rambelles the serve with a kill.

With Patton back serving, the next point proved to be the backbreaker for the Falcons as the ball cross the next six times before Angelo State’s Nailah Gordon was able to tip it past the UTPB defense to pull the Rambelles within one (8-7).

“We didn’t serve tough tonight,” Loesch said. “We had a couple aces here and there, but we just served easy. Give Angelo State credit, they put pressure on us with their serve.”

Movie in the Park