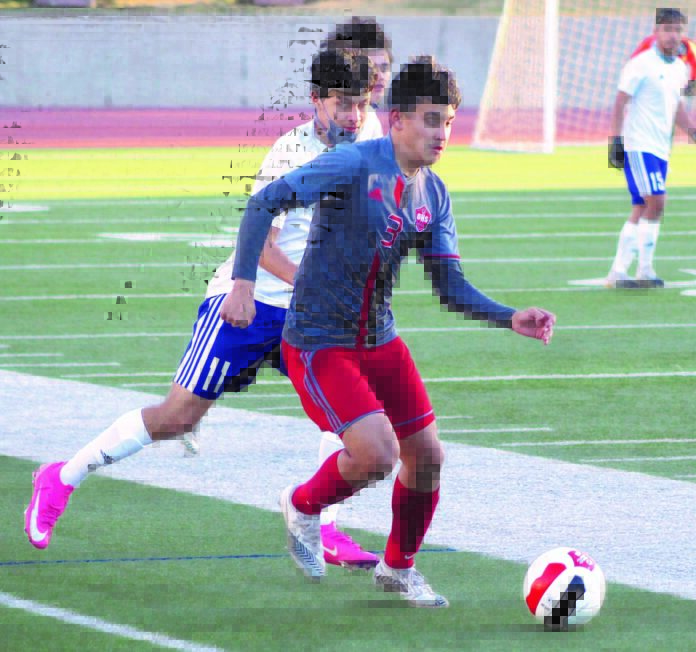 Hector Lujan’s late goal ensured that Midland High earned all the points as the Bulldogs secured a 3-2 win over Odessa High in the District 2-6A opener for both teams Tuesday at Ratliff Stadium.
Lujan broke the tie in the 75th minute as Midland High moved to 4-0-1 overall (1-0 in district) in district play while Odessa High fell to 2-2-2 (0-1).
“I knew coming in that it was going to be a tough game because they’ve been the top team in district the last couple of years,” Midland High coach Jason Bush said. “We just had to fight the whole 80 minutes. Honestly, I don’t’ think we played up to our potential but we’ll play them again later in district play.”
The Bronchos controlled the majority of possession for the opening minutes of the game.
A few opportunities came and went as a shot by Odessa High’s Mark Diaz went of bounds for a corner kick after deflecting off a Midland High defender.
The Bronchos, however, were unable to capitalize on the early set piece.
The missed shot proved costly as the Bulldogs responded quickly on the other end and found the back of the net with Jordan Alfaro scoring from the right wing in the game’s 13th minute
Odessa High wasn’t down for long as Diaz found the equalizer just a minute later.
Midland High’s Israel Ramirez put the Bulldogs back in front with his free kick in the game’s 30th minute and the teams went into the break with Midland High leading, 2-1.
The Bronchos’ patience paid off in the form of a goal by Kobe Ross with 11 minutes left in the game to tie it up 2-2 before Lujan’s winner.
“It was just a good game,” Odessa High coach Eliseo Ortiz said. “I think they were just able to find a way to score at the end at that was it.”