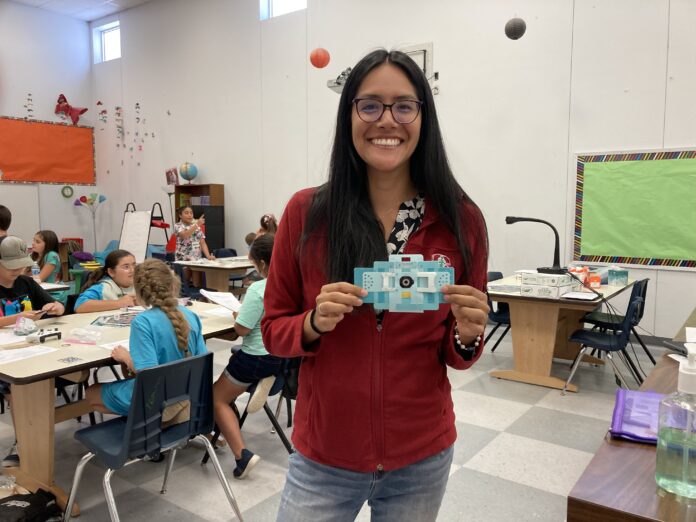 From coding to Minecraft, taking water samples and looking through Foldscopes, students in Ector County ISD’s Camp SIP are hard at work learning this summer.

SIP stands for Scholars in Progress, and the camp, with its theme of Back to the Future, is being held at Blackshear Elementary School.

Along with creating theme parks for the future and art objects out of VHS tapes, students built houses suited for Mars and listened and danced to 80s music.

Representatives from Foldscope, the company that makes affordable paper microscopes that students can put together themselves, guided campers through their discoveries.
Paola Moreno-Roman and Brian Tanabe were brought to Odessa by ECISD Chief Innovation Officer Jason Osborne.

Students collected water and soil samples, and using their Foldscopes, they looked at microorganisms.

The district has hosted Camp SIP for 20 years. This year, the two-week event had 150 to 180 students who are entering second through fifth grade and there are 18 to 20 in a class.

All the teachers are in the SIP program, with the exception of one. Middle and high school students serving as junior counselors. Secondary GT Coordinator Heather Bland said the junior counselors went through orientation just like teachers.

“They also make sure that we have snacks, you can see we’ve got their snacks,” Bland said.

And they take attendance, have lunch with the students and monitor recess.

“That’s been kind of exciting to see our junior counselors get to take on that leadership role. They received Texas Scholar hours for helping with Camp SIP also,” Bland said.

Many of the counselors have been former Camp SIP students.

“This kind of starts that pipeline to our Honors, our AP (Advanced Placement) and our IB (International Baccalaureate) classes. So that’s where we do our recruiting to get counselors. We tried to pair a high school student with a middle school student to kind of develop that leadership,” Bland said.

In Barbara Digby’s class, students like 10-year-old Aneleyah Melendez were building houses on the red planet. Melendez said they could use materials the teacher gave them, or even things they had on hand. They have to, among other things, make sure there is enough glue.

Melendez said they are also learning about growing lettuce through hydroponics.
This is Melendez’ first year in Camp SIP and she said it’s fun, “Because you’ll get to see your friends over the summer. And because you learn new things about like, right now we’re learning about space. And in my other class last week, we learned about the 80s … so we had to dress like the 80s and we learned the board games of the 80s and the music. I just think it’s really mesmerizing at school. It keeps me busy during the summer,” she added.

“There’s like a lot of activities to do,” Ganji said, adding that she likes Digby’s class.

She said she wants to be an astronaut when she grows up, but would prefer going to the moon instead of Mars. “I also want to go to Jupiter,” Ganji said.

Moreno-Roman, earned a doctorate in cellular and molecular biology from Stanford University and works for Foldscope, and Brian Tanabe is a product design engineer for the firm. They led students in a coding exercise Tuesday at Blackshear.

“The summer camp is a great idea to keep the students engaged for a couple of weeks (and to) learn new things. All the students have been very lovely. They are interested in just learning …,” Moreno-Roman said.

They also looked at the soil samples using the Foldscopes to look at insects and other things.

“That was a super small research project,” she added. “Of course, more data needs to be gathered and more experiments need to be done,” Moreno-Roman said.

They collected water samples from ponds at Memorial Gardens, University of Texas Permian Basin and the YMCA. They also took samples of tap water.

Memorial Gardens was pretty clean, as was UTPB, but the pond by the YMCA had higher than normal levels of iron and mercury, Moreno-Roman said.

“And they found less insects …,” she added.

Something that Foldscope wants to do is promote future citizen science projects, she noted.

Tanabe said he was showing students some code this week.

“… It was really fun watching them learn. I started with coordinates and then moved on to drawing shapes with a laser. And they were super creative … We would show them how to use one shape at a time and one tool at a time and they’re really creative (in) … finding ways to make things that you might not have thought possible,” Tanabe said.

He was also intrigued with the way the students helped each other.

Mayra Alvarez, a SIP teacher normally based at Murry Fly Elementary, was in charge of the group being visited by Moreno-Roman and Tanabe. She has taught at Camp SIP before and enjoys interacting with gifted and talented students from across ECISD.

“This is an awesome group and it has been a wonderful activity. (They had an) opportunity to work with Foldscopes and they have really enjoyed it, especially going and looking for different specimens. That was our favorite part,” Alvarez said.