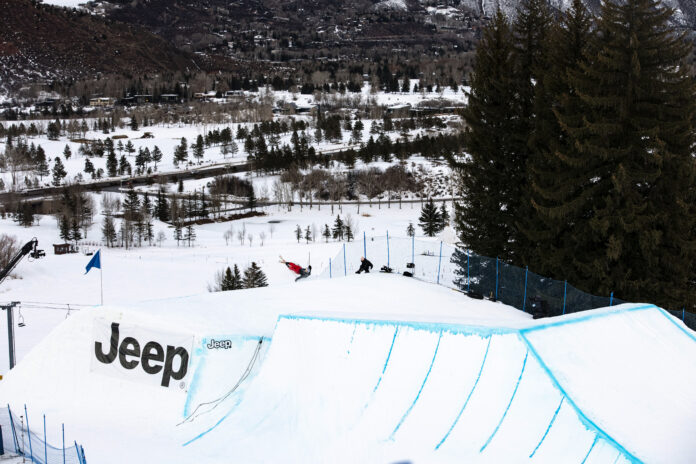 ASPEN, Colo. (AP) — There’s only one rule in the event that has captured the imaginations of all the high-flying daredevils at the Winter X Games: Do something cool.
This weekend, cool will happen in a contest called Knuckle Huck, a set of low-flying, highly creative trips down the mountain that have, in many minds, helped action sports rediscover their roots.
Without the bright lights and TV cameras, this very well might be what snowboarding or freestyle skiing looks like when friends get together for a day on the slopes.
The uniquely Winter X contest works like this: A group of snowboarders (competition starts Friday night) or freestyle skiers (Sunday) have 20 minutes to “huck” themselves over the bottom “knuckle” of the hill that’s set up near the big-air venue — bypassing the massive kicker completely. Judges rank the riders on overall impression — no scores.
The winner takes home a set of gold-plated brass knuckles dangling from a chain. There are no silver or bronze medals — in fact, no other rewards at all, other than the smiles that radiate across the mountain when this event, now in its third year for snowboarding (second for freestyle skiing) ends.
“It’s so much fun, because there’s so many endless possibilities,” said snowboarder Zeb Powell, who won the competition last year but is sitting out this season as he recovers from a knee injury. "You’re always jumping out of your chair because you don’t know what you just saw. You can’t process it. You’re like, ‘Oh my gosh, how did he do that?’”
Where the typical halfpipe or slopestyle contestant seeks perfection on high-flying moves that have been done before, hundreds of times, Knuckle Huck calls for absolute originality.
“The way you win the event is by doing something that doesn’t have a name, by coming up with a creative way to go over the knuckle or to hand-drag it or flip in a way that has never been done,” Winter X Games freestyle skier turned broadcaster Tom Wallisch said.
A disclaimer: You will not see this at the Olympics next year — or maybe ever.
In a world that has been constantly defined by progression — i.e., death-defying leaps and flips above the frozen halfpipe and the rock-hard slopestyle kickers — this Winter X event harkens back to the sport’s roots. It speaks of a time when friends went to the mountain looking for moves that would impress each other, not necessarily some judge sitting in a booth.
“That’s the closest any of these X Games events come to feeling like what the sport really is all about,” said Wallisch, who participated in the inaugural ski Knuckle Huck competition last winter while wearing about 10 pounds of broadcast equipment to provide on-course commentary. “For us growing up, it’s all about skiing with your friends, pushing each other, trying to learn new tricks, just laughing and having a good time and sort of the camaraderie of skiing together.”
For now, it’s only a men’s event. But in a nod to the fluid, come-one-come-all nature of the sport, two-time women’s Olympic slopestyle champion Jamie Anderson was set to join the men on the hill for the snowboarding version of Knuckle Huck on Friday night.
Don’t count her out, either.
“It just comes down to creativity and expressing your style rather than just hucking some big double or triple corks," explained Colby Stevenson, who won the inaugural ski version of the event last season in Aspen along with slopestyle. “It’s a more mellow competition.”
This is what “mellow” look like at Winter X: One of Powell’s tricks on his way to gold in 2020 was a “Coffin Method Back Flip” where, at full speed, he bent down near the knuckle, slid on his back along the snow and did a flip while grabbing his board.
The fans — not allowed in the park this year because of COVID-19 protocols — loved it. Hard not to be awed as a competitor, either.
“We feed off the energy of the competition," Powell said. “It’s an all-around, fun, exciting event for everyone."
The Knuckle Huck began on the snowboarding side at Winter X in 2019 (first winner: Fridtjof Tischendorf — "Fridge" for short and who competes while wearing a backpack). The freestyle skiers liked it so much they wanted in and were included last winter.
Anything can happen in the Knuckle Huck — similar to the vibe on the mountain with buddies.
“You’re not going to see anyone frowning or being sad because they fell or something," Wallisch said of the competitors. “Because it’s just such a good time.”
———
More AP sports: https://apnews.com/hub/sports and https://twitter.com/AP—Sports