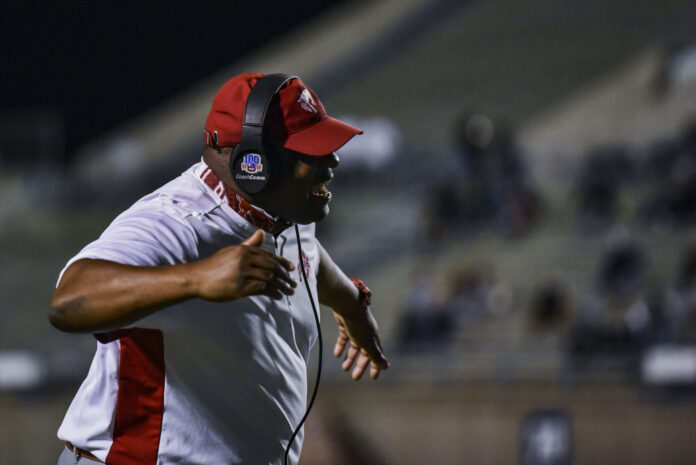 Ector County ISD Executive Director of Athletics Bruce McCrary said Friday that Odessa High head football coach Danny Servance has been reassigned from his duties as leader of the Bronchos football program.
Servance went 0-7 with the Bronchos in a truncated 2020 season and finished with a 10-37 mark over his five seasons leading Odessa High.
The Bronchos had three games canceled this season due to scheduled changes made via COVID-19 precautions. His best season was a 5-5 mark in 2018 and Odessa High did not make the playoffs in any of his five seasons.
“District leadership evaluates all programs and through the evaluation process, that was determined,” McCrary said. “Moving forward, we will start the search immediately.
“We’ll work with the Odessa High community from parents, players and alumni to build a profile of what the next head football coach will be.”
Calls to Servance for a comment on the change were not returned.
McCrary also confirmed that assistant head coach and offensive coordinator Dean Garza would take over the position on an interim basis until a new hire is made. He declined to comment on where Servance would be reassigned to.
Odessa High is the third school from District 2-6A that will have a new head coach heading into the 2021 season.
Midland High is looking for a new head coach to replace Tim Anuszkiewicz while San Angelo Central has started its search after Brent Davis was hired at Gregory-Portland High School in South Texas.
Servance coached Odessa High after spending nine years as the head coach at Lubbock Estacado, compiling a 54-50 record and guiding the Matadors to the playoffs each season. Lubbock Estacado had been 2-28 in the three previous seasons before Servance’s hire in 2007.
He graduated from Permian in 1986 and was a member of the 1984 state championship team. He also was an assistant coach on the Permian football staff from 1996-2000 and was the boys basketball coach for the Panthers from 2000-2005.
Having as many ties to the community is what McCrary said made making this decision difficult.
“Danny Servance is a great man. He’s a good guy and he means a lot to us,” McCrary said. “That’s why we wanted to make sure that we were doing our due diligence and making the right decisions because he is an important person in the community. We have a lot of respect for Danny Servance.”
McCrary added that the district had received plenty of feedback in recent weeks about the direction of the program. The Bronchos are now left looking for a new leader that will try and get them back to the postseason for the first time since 2013.
“That’s always important us,” McCray said. “When you make decisions like that, you have to make sure that you’re doing the right thing. You can’t make a rash decision.
“We met with and heard from several members of the community and all that stuff is valuable when you’re evaluating programs. That doesn’t make your final decision but it certainly helps.”
McCrary said that he would not be leading the search committee for a new head coach, rather a committee within ECISD. He confirmed that he’s retiring from his position effective June 30 after serving in that role over the past three years.
He did not give a specific date as to when he hoped the position would be filled only that they would be looking for the best candidate.
>> Follow Tony Venegas on Twitter at @OA_TVenegas