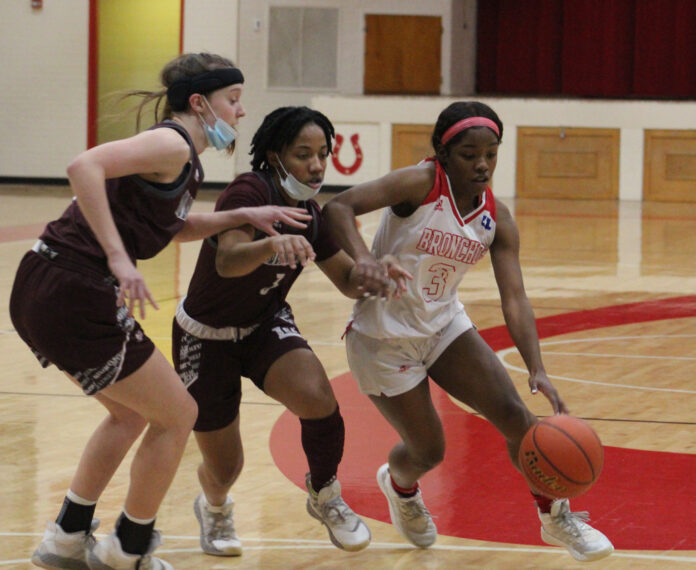 The Odessa High girls basketball team entered its pivotal District 2-6A matchup against Midland Lee looking to retain control of the fourth and final playoff spot.

Things did not go as planned for the Lady Bronchos.

Odessa High was held in check by a swarming Lady Rebels defense as the Lady Bronchos fell 46-24 Tuesday at the OHS Fieldhouse.

The loss dropped Odessa High (10-13 overall, 4-6 district) out of fourth place in the standings with two games left in the regular season.

“We just didn’t drive to the basket and we settled for a lot of floaters and teardrop shots that we didn’t do in the first half of district,” Odessa High head coach Marcus Chapa said. “We took it to them the last time we played and we were just very timid tonight. You can see the difference in the score.”

Both teams found it difficult to get going offensively as the first field goal did not come until Odessa’s High’s Deoshanay Henderson’s layup with 4:44 remaining in the first quarter.

The Lady Rebels’ first basket came on a Myleah Young 3-pointer at the 3:25 mark and it proved to be a sign of things to come. Young and Alyssa Green combined to make eight 3-pointers to propel the Midland Lee offense. Green finished with a game-high 17 points while Young had 11.

Lee created separation in the second quarter with an 11-1 run after Odessa High opened the period with a Paige Byford layup. A 14-11 margin grew into a 25-12 halftime lead.

Odessa High cut the deficit back to 11 points midway through the third quarter before a 7-0 Midland Lee run pushed the lead up to 35-17 to take control and effectively seal the game.

It was the fourth straight game that the Lady Rebels have held their opponents to 30 points or less.

“I was proud of the girls coming out and being ready to play and being locked in,” Midland Lee head coach Alfred Acosta said. “Coach Chapa does a great job and he’s got some phenomenal players on that side and we just game-planned to try and take away the things they do well and our girls handled it and performed well.”