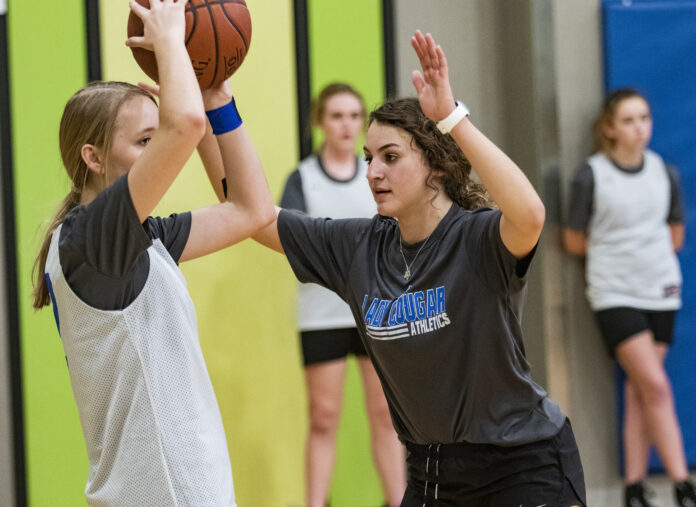 Now they get to deal with more as they finally get on the floor.

The start of the Lady Cougars’ inaugural varsity season was delayed two months because of COVID-19 concerns. What under normal circumstances should have been their first workout was also their District 5-3A opener at Coahoma on Jan. 5.

In a season that already contained a number of obstacles, Compass will play just its 10-game district schedule with all games on the road.

“We have one gym — a new facility is being built — so we’re scheduling eight teams for one gym, practice times and games,” said Lady Cougars coach Christina Bush, also the school’s volleyball coach. “It’s a little more different than volleyball, but still the same concept.

“Our gym only holds 84 people. We got some backlash from our district, so our administration decided that we were going to travel every game.”

The results have been less than Bush would have hoped for. After dropping its opener 77-14 at Coahoma, Compass lost 93-13 at Sonora on Friday. The Lady Cougars lost their third outing 60-6 Tuesday at Reagan County.

The Lady Cougars were just getting things started back in October when the program was shut down for the rest of the fall semester. It resumed operation when students returned to classes after the holidays.

“Those first four days back, we had one practice Wednesday,” Bush said. “Then middle school had home games on Thursday, so the gym was occupied and we weren’t able to practice. We’re in a unique situation compared to everybody else.

“We’re going to be utterly and completely excited for when our new facility will be ready this spring for our 2021-2022 school year and our second year of UIL competition.

“We’ve been faced with some challenges and obstacles due to COVID, but that hasn’t held us back. We’re just excited to be able to travel and get on the court. Not all progress is about wins and losses, it’s not always about the score. If we’re progressing and making corrections and whatever we can change to be better for next year, that’s how we’re addressing this season.”

The situation has forced Bush to keep things fairly simple early on for a young team that is also short on depth. After juniors Kinzee Jamierson and Halle Holmes, the roster consists of four sophomores and three freshmen.

“As coaches, we all scout and we all try to prepare for that next team, Bush said. “We work on a defense in preseason, and once you get to district everything changes. Now you’re switching your defense up for that opponent or you’re changing your offense.

“In a way, I’m kind of glad we didn’t spend two months on a certain defense that may not even work. In a positive light, we’re taking each game and each district opponent differently. We’re working on the skills we have.”

All things considered, Bush said, simply putting a team on the floor has been a victory for the Lady Cougars.

“I’ve been proud of my girls the past week,” she said. “Prior to that, they tried to get together on their own, whether it be out at a playground or going to the Y. They took the initiative and showed the commitment to get back on the court. They’ve been composed, they’ve handled themselves very well for the first week and I believe we’re to continue doing that moving forward.

“Just that in itself, to me, says I can respect how we came into the season as well as build their confidence. Given everything, I’ve been proud of their attitude and proud of their fight. It’s where we are.”