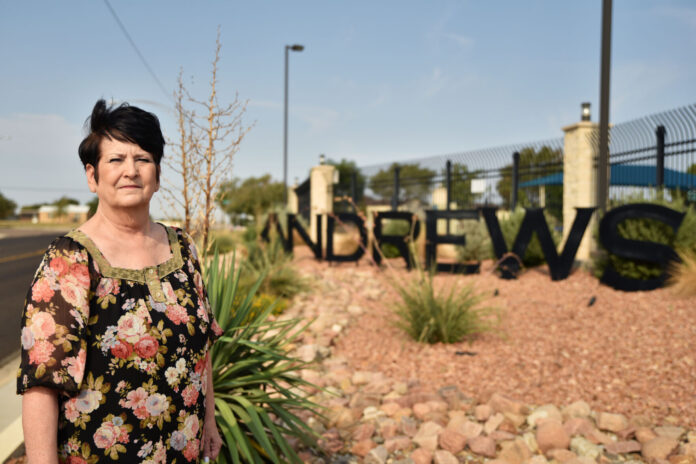 A painful and emotional recovery

What started out as a spur-of-the-moment movie date with her husband turned into a life-altering event for Penny Moore.

A retired school teacher from Andrews, Moore and her husband, Dennis, were among the cinemagoers at Cinergy Odessa on Aug. 31, 2019, when Seth Aaron Ator’s shooting spree ended in a gun battle between law enforcement and Ator, who died in that final exchange.

Ator’s murderous rampage ended after he killed seven and injured 25 others on a hour-long shooting spree around Odessa.

The Moore’s were among a group that was first told to exit the theater, then ordered back inside as Ator and law enforcement agents had their final confrontation in a field near Cinergy when Ator was shot to death in a stolen postal van he had hijacked in Odessa.

In the rush of running back into the theater, Moore suffered a broken left ankle.

“We were rushed out in the middle of a movie and were not initially told what was going on,” Moore said. “They just came in and said we’ve got to get out, got to get out now. They opened the door to the pasture outside the theater and rushed us all out. We stood out there I don’t know how many minutes before anyone even said what was going on.

“We stood out there for a little bit and all of a sudden we heard somebody yell, ‘get down,’ and we started hearing gunshots by the street in front of us. There were cars lining the street all up and down that highway.”

The sound of gunfire brought home just how serious the situation was, Moore said.

“My mind was telling me get down, this is real,” she said. “At my age, it took a little while to get down flat on the ground on that unlevel pasture. Then they suddenly hollered, ‘get up and run back to the building.’ When I got up and running toward the building, my foot went into a hole and I went down.

“A man who I believe was an off-duty or retired fireman — my husband couldn’t get me up — rushed by, scooped me up and ran me over to the building and set me down a chair. Eventually, I was carried up to the lobby from the movie theater back up to the lobby where we waited for an ambulance about an hour or so later.”

While far from the most serious injury of the encounter, it took almost the rest of 2019 for Moore to recover.

“Getting over what sounds like a little bitty thing of breaking an ankle took five months and two surgeries, six days in the hospital and 12 weeks of therapy,” she said. “My insurance company would call about once a month to check about my psychological condition and did I need a counselor. I haven’t had one. I felt like I was OK. I did take Tylenol. I didn’t even take any heavy medicines because I don’t like the way they make me feel.

“The 12 weeks of therapy finished up about the middle of December. It took from Aug. 31 to December to get where I could walk. And even after that it’s been a process of getting back to where I could actually walk without flinching.”

For Dennis Moore, an account manager for Graco Oilfield Services, the lasting impact has been more emotional.

“This ol’ world’s getting screwier every day, crazier every day,” he said. “Since it happened, I think we’ve been to one movie, but she’s still not real crazy about going to movies or stuff like that.

“It’s affected the way we look at things as far as going to a mall or a theater or anything. You don’t know in this day and time now. People are just flat crazy. We’re old, I mean I’m 68, but I’ve never seen it like it is now.”

Penny Moore said the confusion of the situation made it that much more terrifying.

“My husband wasn’t sure when I went down,” she said. “He thought I’d been hit. That was what scared him the most because we could hear the gunshots.

“We could hear children and women crying all around us because they were terrified. All I can remember thinking is I’ve got to get down. This is real.”

Moore, a grandmother of five, spent 25 years with the Andrews school district, teaching elementary students at three campuses. She retired in May 2019 after teaching fifth-grade science at Underwood Elementary School.

Moore remains involved in the classroom as a substitute teacher, though she missed all of the 2019 fall semester.

“As a matter of fact, I got called while I was in the hospital and had to explain that I had broke my ankle and would not be able to work until after December,” she said. “I did go sub some, but it was mostly half days and it would just about take it completely out of me to do a half day using a cane.

“But I can’t hardly stand not being around the kids. I’ve got to have that shot. It’s not so much a money thing as, I guess, a calling. I still love to do it.”

Moore is also active in her church, Odessa Gospel Lighthouse Church, and she has taught adult Bible study and adult Sunday school classes over the years.

“Between adult Bible and kids’ activities at school, my time was pretty much taken up,” she said.

Moore said that as an educator, she had received training in what to do in crisis situations, but it was nothing like the events of a year ago.

“Teachers are taught how to react in these situations,” she said. “We practice them at the school all the time. We’re taught to lock down. We have the different signals that go off, we’re taught how to lock the doors, how to put the kids in a corner, how to have the room dark, all the things you do for an intruder or gunman in the building. Your first care is for those students.

“When I found out what was going on, I thought why would you rush all these people out into an open field beside the theater. What I was told later was they didn’t know if there was more than one.”

In the aftermath, Moore said, she was almost totally dependent on her husband of 47 years.

“He took care of me totally those first four months,” she said. “He’d go to work and come back. He’d check on me. He cooked every meal and waited on me hand and foot because I couldn’t get on my foot at all the first four weeks. Even after that, it was with a walker or some form of walking device.

“He had to do everything. He was a great support.”

Dennis Moore said the care his wife received at Medical Center Hospital got the recovery process off to a good start.

“Medical Center with Russell Tippin in charge, they were great,” he said. “That whole floor, the nurses and personnel, you couldn’t ask for better people. They made a good decision when they hired Russell Tippin (who was named president and CEO of Medical Center Health System earlier in August last year), an old Andrews boy. He knows what he’s doing.

“That whole hospital system is fantastic. Every nurse, every physical therapist, everybody we needed to talk to was right there.”

Another benefit was the support the Moores and other victims received from state and area officials.

“The State of Texas came in and picked up part of the bill,” Dennis Moore said. “Just with a broken ankle, having two surgeries and doctors and all that, that was a chunk of money that my insurance company got stuck with. They picked up a lot of the bills.”

“I am thankful to the Good Lord to be alive and well,” she said.

Moore said the outpouring was immediate.

“I would like to thank all those who came to check on me, support me and who showed their concern for me,” she said. “I appreciate all the folks at the Odessa Chamber of Commerce, and there were several people here in Andrews that immediately got together a little fundraiser-type thing out of the sweetness of their hearts. They played games and things to give us the contributions from that as a support. There were a lot of sweet people.

“I thank the good Lord, honestly and truly, because it could have been a lot worse than what it actually was. And that was bad enough.”

TEXAS VIEW: Abbott should not endanger children by refusing shelter

SULLUM: Does elderly veteran have any recourse against cops who assaulted him?

ECISD recognizes employees of the year