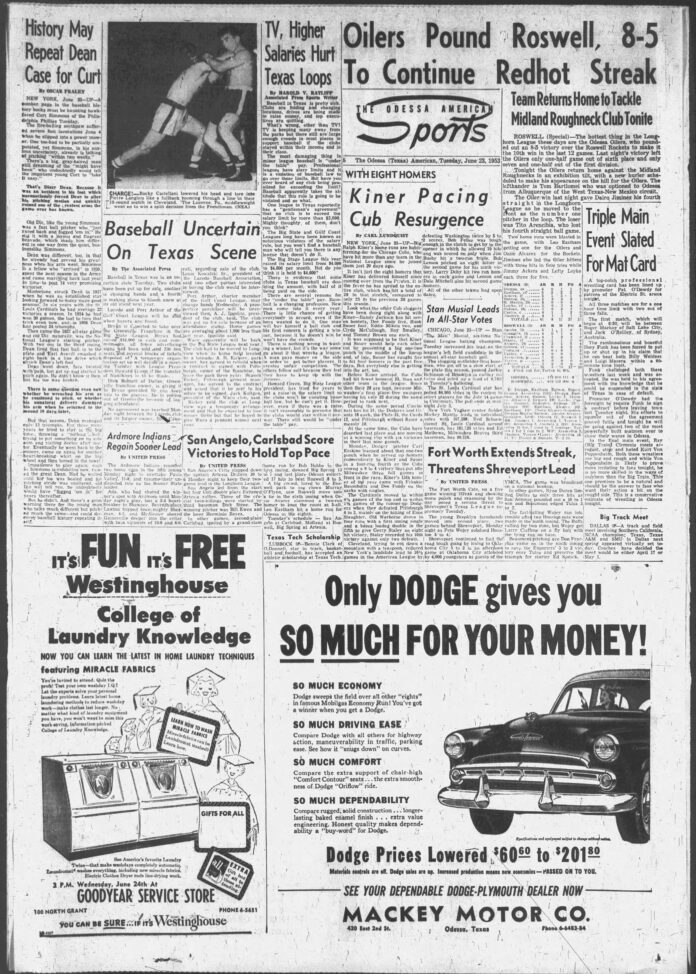 >> 1953: The Odessa Oilers picked up their 10th win in 12 games after defeating Roswell 8-5. The win put the Oilers 7.5 games out of the first division. The team was scheduled to face the Midland Roughnecks in an exhibition game the following day.

>> 1982: The Midland Cubs swept a doubleheader against the El Paso Diablos, 11-6 and 5-2. Although Midland didn’t get off to a strong start in the first game, the Cubs stormed back from being down five runs. The team had a better game to close out the doubleheader against the Diablos. … Cathy Carlson of Odessa advanced to two semifinals in the 24th annual Odessa Open Highway 80 Tennis Tournament. The Odessa High tennis player only lost four games before reaching the semifinals in the 16 and 18 singles.

>> 2008: The Odessa Roughnecks clinched a spot in the Intense Football League playoffs after defeating the Fairbanks Grizzlies 59-50. It was the fifth time the team advanced to the postseason under head coach Chris Williams. After going 6-7, the Roughnecks would face the Katy Ruff Riders in the playoffs. … Kyle Busch won his first Sprint Cup Series on a road course. He secured the win after starting 30th and steadily moving through the field. It was Busch’s fifth win of the season. … Tennis players debated whether Roger Federer was still the athlete to beat heading into the Wimbledon Championships. Bjorn Borg and Novak Djokovic said his reign was in jeopardy while Pete Sampras and Rafael Nadal said he was still the man to beat. Federer went into the competition with a 59-match winning streak.

>> 2013: Nathalia Escontrias followed in her father’s footsteps, picking up multiple wins on track at the ninth annual Dr. Daniel Cepero Memorial Track and Field Meet. Escontrias’ mother, Lauren Garcia, said her daughter looked like Alex Escontrias who was a cross country state champion at Odessa High. … UTPB was well represented during the 32nd annual Juneteenth basketball tournament at Permian High School. Six of the nine players on the second place Whirlwinds played for UTPB at some point. Jerome Willis, who was also on the team during the tournament, was the women’s head basketball coach at the university.