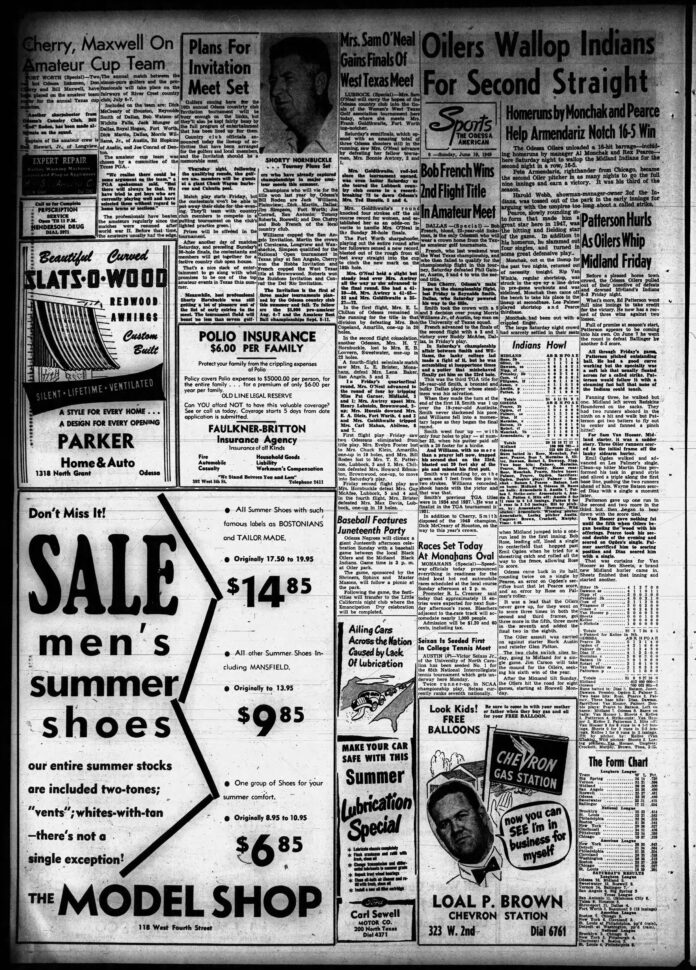 >> 1949: Pete Armendariz pitched a complete game as the Odessa Oilers picked up a 16-5 win over the Midland Indians. The pitcher surrendered 11 hits on the day, while Rex Pearce had a big game with a home run and four singles. Odessa took the lead in the bottom of the first inning and held on throughout the rest of the contest. … The 10th annual Odessa Country Club Invitation Tournament was set to keep golfers busy throughout the entirety of the event.

>> 1956: The State TAAF Boxing Tournament was set to be held at Ector County Auditorium. The tournament would feature boxers from Fort Worth, Midland, Odessa, Big Spring, Andrews, Pecos, San Angelo and Crane. The exact number of boxers in attendance would be calculated after official weigh-ins were conducted and the tournament was separated into two classes for open and novice boxers. … Cincinnati Redlegs manager Birdie Tebbetts said the National League pennant was up for grabs for the first team to put together a solid winning streak.

>> 1999: Andrews’ Chad Campbell missed the cut at the U.S. Open after shooting an 82 at Pinehurst Country Club. His two-round total added up to 156, nine shots off the 147 needed to qualify for the next day. … The San Antonio Spurs won their 12th consecutive playoff game behind strong performances from Tim Duncan and David Robinson. Duncan’s 25 points, 15 rebounds and four blocks combined with Robinson’s 16 points, 11 rebounds and five blocks to give the Spurs a 2-0 NBA Finals series lead over the New York Knicks.

>> 2018: Jesse Florkowski sat in second place after the first round of the North American One-Armed Golfer Association  Championship at the Odessa Country Club. Florkowski had never lost at the competition in four attempts and was considered the favorite to win the tournament. … The Texas Tech baseball team won its College World Series opener by a 6-3 score over defending national champion Florida. The Gators, who were led by first round draft pick Brady Singer, struggled offensively for the third straight game.