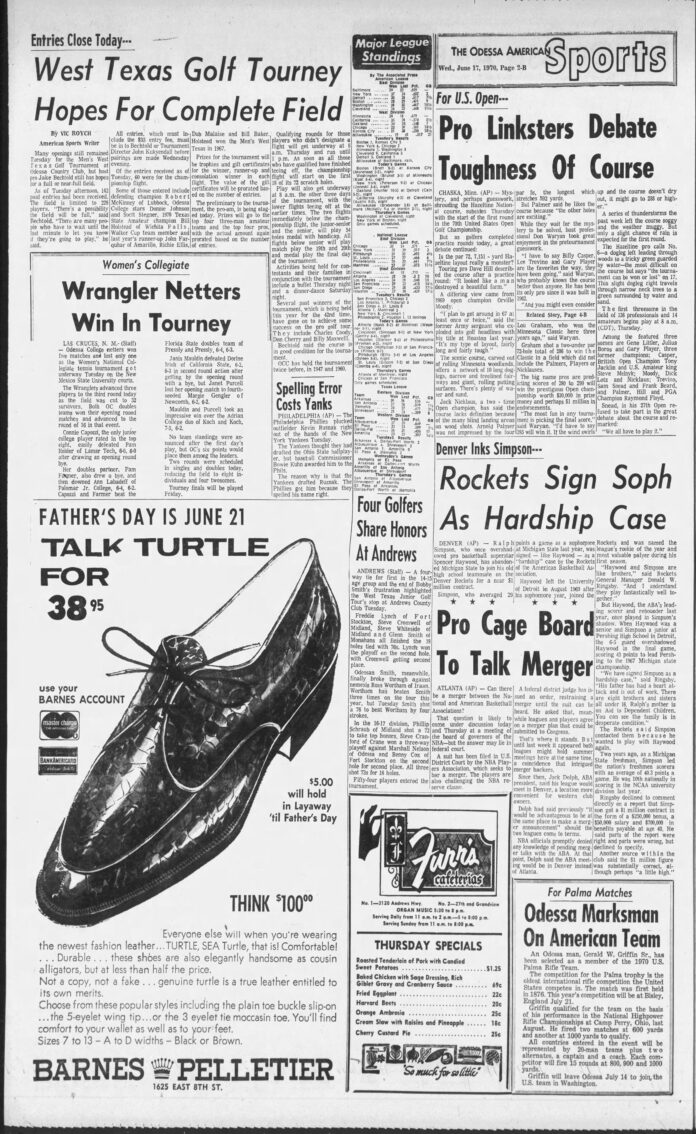 >>1943: Odessa Country Club wasn’t holding its annual Invitation Tournament, instead opting to run a tournament benefitting the National War Fund. The original competition was set aside because of conditions during World War II. All amateur golfers were eligible to enter and non-club members had one practice day at the course before qualifying by registering and paying the entry fee.

>>1970: Host pro Jake Bechtold hoped to host a full or near full field at the Men’s West Texas Golf Tournament at Odessa Country Club. The field was limited to 228 players and the country club had received 142 paid entries. … Odessa College tennis players had a strong showing at the Women’s National Collegiate tennis tournament in Las Cruces, New Mexico. The Lady Wranglers won five matches and only lost one on the first day of the national competition at New Mexico State.

>>1991: The Odessa College rodeo team was making what might have been its last trip to the College National Finals Rodeo in Bozeman, Montana. The city had hosted the rodeo for 20 of the last 21 years but was receiving strong competition from other cities to host the event. … Payne Stewart and Scott Simpson were heading to an 18-hole playoff in the U.S. Open. Both golfers shot par-72 to come in at 6-under 282 and tie for first place. … Odessa American sportswriter Gaylon Krizak investigated what it would take to add intercollegiate athletics at UTPB. He compared the university to its counterparts across the state in the UT system and how they managed their athletic programs.

>>2016: Six Midland RockHounds players were selected to represent the team at the Texas League’s annual All-Star Game. Matt Chapman, Corey Walter, Wade Kirkland, Beau Taylor, Franklin Barreto and Andres Avila received all-star recognition. … The U.S. Open was unplayable after heavy rains saturated the greens at Oakmont, Pennsylvania. Only nine players finished the first round and 78 didn’t tee off. … Clint Dempsey and Gyasi Zardes scored against Ecuador to advance the U.S. to the semifinals of the Copa America. The 2-1 win meant the men’s national team would face either Argentina or Venezuela in Houston.

BOXING: Mendoza motivated to keep moving up the ring ranks