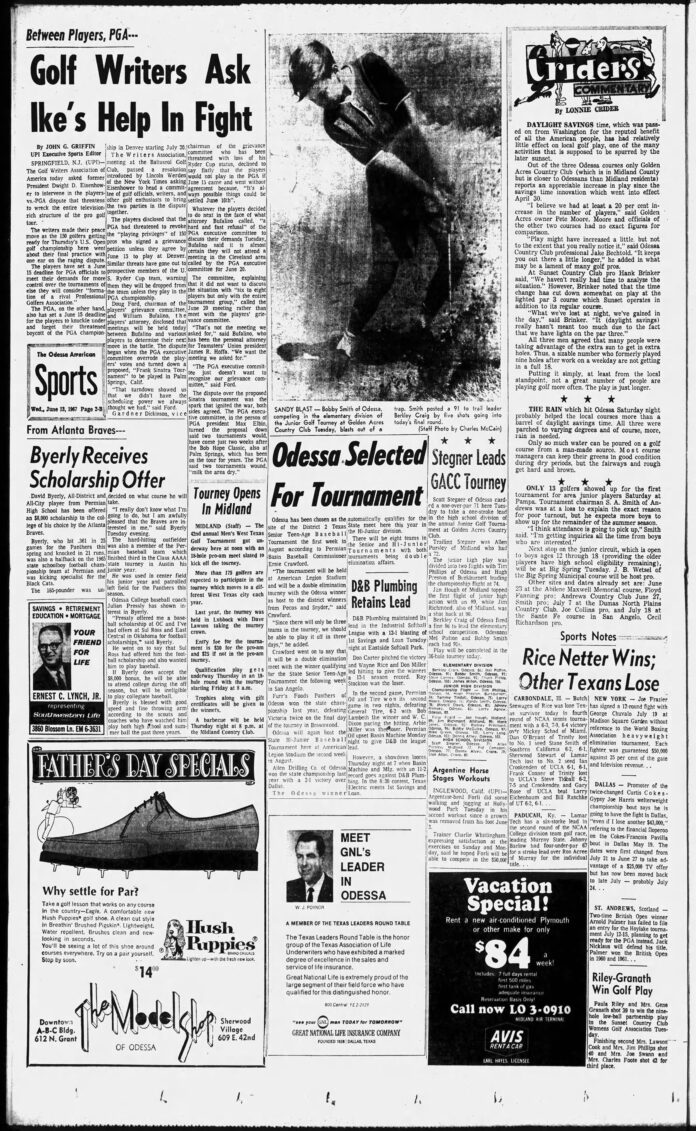 >> 1967: The Atlanta Braves offered Permian outfielder David Byerly an $8,000 scholarship to the college of his choice. … Byerly, who was also a halfback for the Permian football team, received a baseball scholarship offer from Odessa College and football offers from Sul Ross and East Central in Oklahoma. … If he accepted the Braves offer, he could attend college in the offseason but he would be ineligible for college baseball season. … Odessa’s Scott Stegner had a one stroke lead in the high school division of the Junior Golf Tournament held at Golden Acres Country Club.

>> 1979: James Martinez from Odessa was looking to secure Ring Magazine’s top United States featherweight boxing ranking against Ruben Castillo in Las Vegas. … Martinez and Castillo were set to go 12 rounds at the Sahara Hotel, with the winner of the bout receiving a world title opportunity against Danny “Little Red” Lopez.

>> 2000: Danny Servance was selected as Permian head boys basketball coach. … He was an assistant under Gary Bridges, who resigned to take a boys basketball coaching gig at Levelland High School. … Servance was an all-state linebacker in 1985 and an all-district basketball player when he went to Permian. … Odessa College barrel racer Shayna Price found herself in second place at the College National Finals Rodeo in Casper, Wyoming. … Her race time of 16.14 seconds combined with her first time of 16.18 put her second in the average at 32.32.

>> 2012: The UIL was looking into expanding its Class 3A and 2A playoffs. … The original format gave district champions a week off before starting postseason play, something that Pecos baseball coach Eric Garcia viewed as a hindrance. … After finishing with an undefeated district record, Pecos was swept by Lubbock Estacado in the area round. Garcia felt having an extra week off hurt his team and made it lose steam. … Former Odessa High tennis coach Wesley Kidd got the chance to coach alongside his father during a camp at the Bob Clark Tennis Center. … Kidd would help his father with camps at Beeville Jones High School and his father returned the favor by coming out to Odessa.