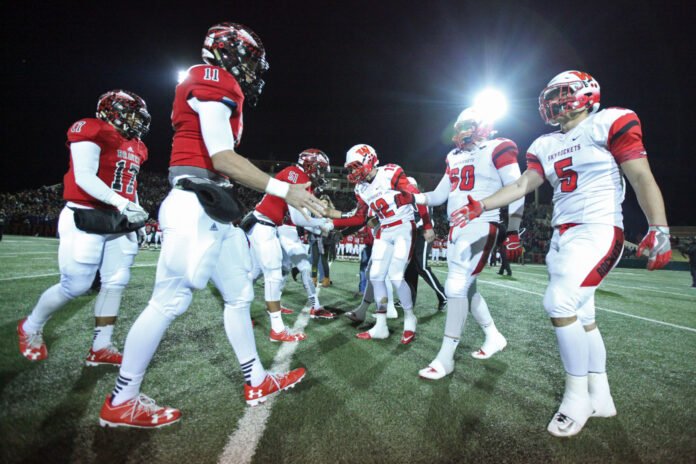 ABILENE After a week where there was plenty of tears shed around Iraan, the town’s football team gave it a reason to celebrate like it hasn’t in 20 years.

The Braves blocked out all possible distractions to hold a lead for nearly the entire contest and defeated the Wellington Skyrockets 42-21 to advance to their first state championship game since 1996 in front of a crowd of 8,500 at Shotwell Stadium in a Class 2A Division II state semifinal.

The home side was nearly filled to capacity, made up of nearby residents, Iraan fans and over 850 cheerleaders from over 85 schools.

“It means a lot to our school and community,” Iraan head coach Mark Kirchhoff said about the win. “It’s a place for us to start healing. In Texas, there’s nothing better than high school football and that’s a focal point in our community from the first of August. For us to be able to come here and to be able to have the support we had on the road, the human spirit is alive and well because of all the wishes we got this week.

“Our kids got here and just took care of business.”

Iraan stopped Wellington on its first drive of the game to give the Braves the advantage out of the gate.

Then as it appeared that the Skyrockets were going to do the same to them, Iraan quarterback Clayton Kent read the defense perfectly to turn a usual run play into a play action pass to Canon Andrews for a 43-yard touchdown.

Although Wellington briefly tied it, Iraan running back Daryel Lozoya ran for a 68-yard touchdown as he shook off two Skyrocket defenders to find a seam in the defense.

With Iraan (15-0) up seven and Wellington driving again, the Braves defense made a crucial stop to keep the momentum for the rest of the game.

On that drive’s final play, a 4th-and-6, Skyrockets’ quarterback Luke Williams saw an open target in receiver Andrew Rueda. As Williams threw the ball, Iraan defensive back Camden Chaney was able to rush over to Rueda and make enough contact as the ball got to him to force an incompletion.

“I looked over and I saw my cornerback and I saw him release an open man up the field,” Chaney said. “I started sprinting and tried to get their as fast as I could and luckily I got there and saw the ball in air and tried to put my hands on it any way I could.”

The Braves were able to keep their momentum into the second half when Kyle O’Bannon fielded the only non-pooch kick from the Skyrockets (13-2) during the game to start the third quarter.

O’Bannon, with Corley Collins and Lozoya on either side of him was able to use a wall of blockers and a caravan of Braves’ players to score and give them their first double-digit lead of the game, where the Braves would keep it for the rest of the contest.

Slowly but surely the crowd knew that the team representing the community that lost Liz Pope was going to the state championship.

When the final horn sounded, the home side erupted with cheers as the Braves made it official that the recent bus tragedy didn’t affect them.

Pope’s nephew, Iraan senior offensive lineman Steven Garlock had “12-3-16” written on his wrist tape to honor the date of his aunt’s passing. His mother, Christina, is still in a Lubbock-area hospital recovering. Steven said however that she gave him a powerful message.

“Every time I talk to her, the very first thing she says to me is ‘don’t you worry about me, I’m all right,” Garlock said.

Garlock’s mother also told him to make sure to play their butts off. The Braves did just that.

After the game, the Braves’ cheerleaders brought a sign in front of the team for a photo that read “Liz believed.”

“It means everything in the world. She loved this football team more than anything; she loved each and every one of us more than anything,” Garlock said about Pope. “She’s with us tonight. She’s up their right now watching us.”

Most of the crowd was with the Braves too.

They were at the game to show their support for Iraan after some of its cheerleaders couldn’t perform its normal routine of cheers because of injuries sustained in the accident.

“I was really happy that our squad would be able to come out here and do something like this for them, it’s a great opportunity,” said Odessa High cheerleader and junior Selena Levario. “It brings us all together all as a team. It doesn’t matter what color we’re wearing. We’re all together as one for Iraan.”

Iraan’s cheerleaders were on the sideline, getting a front-row seat to watch their favorite team play.

They’ll get another one as well as the Braves now have under a week left until their state championship game against Bremond on Thursday at 10 a.m. at Arlington’s AT&T Stadium. The Tigers used a second-half comeback to defeat Burton 50-31 in their state semifinal.

Bremond are two-time defending state champions lead by quarterback and Texas A&M commit Roshauud Paul, who is 46-0 as a starter.

“Adversity is nothing that we’ve never had to go through,” Garlock said. “We’ve been through it plenty of times. This week was a bit tougher than it usually is, but we powered through it and it’s never going to stop us.”