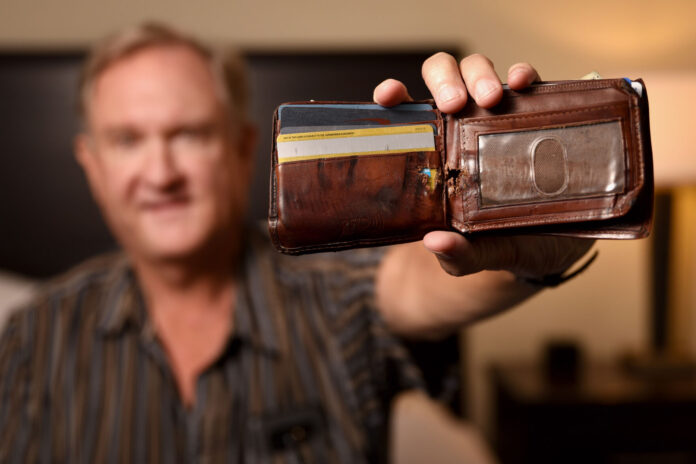 Joe Glide is a spiritual man who praises the “10 angels always watching over him.”

He also declares that he has more lives than nine cats.

It could be a bit of both as Glide, who continually calls himself one of the “lucky ones,” was a victim of the murderous rampage of slain gunman Seth Ator last Aug. 31 in Odessa. Ator would gun down seven and wound 25 others on that hot Saturday on Labor Day weekend last year.

Glide was shot while he was driving from the airport to Odessa on Interstate 20. In front of him he would see an orange truck wildly careen off the interstate and hit a pole after the gunman shot that driver. Law enforcement would later tell him the man in the orange truck had died.

It was, in fact, that truck lunging to the side of the road that made Glide question what was going on around him. Had he just heard shots? Why were so many cops and troopers dashing down the Interstate? Where were all the cops going?

Looking back, he quietly says that, remarkably, the two bullets that struck him bled very little. He wasn’t even aware he had been shot — let alone shot multiple times.

He would glance at the door and see bullet holes. It all became clear to him — the driver of the orange truck had been shot. Glide was shot as well.

He would pull up near DPS Troopers and at least one Odessa Police Department officer (a former soldier who Glide credits with triaging him but whose name he does not know) and roll down his window to tell them that he thought he had been shot.

One bullet traveled from the left of his abdomen across his stomach and would stay lodged there until Dr. Donald Davenport would remove it later that day during surgery at Medical Center Hospital. The angels and cat lives were at work as that bullet missed all his vital organs.

A second bullet entered and exited his left leg — severing nerves and leaving the leg partially numb to this day. A third bullet would not hit Glide but instead would damage his thick wallet and lodge itself into what might have become somewhat of a macabre souvenir that strangers, kinfolk and friends ask to see when the subject of Aug. 31, 2019, comes up.

He’s gentlemanly when asked to produce that wallet with the strange hole through it. The bullet, taken by an FBI agent last year as evidence, is long gone but the brown leather wallet bears the hole as testament to his 10 angels or nine times nine cat lives.

After the triage from the OPD officer, troopers quickly drove him to MCH. He compliments the medical staff and officers often during an interview and talks about the calm at the hospital despite the chaos of a mass shooting on what is now called Odessa’s darkest day. “Everyone was exactly where they were supposed to be and it ran like clockwork.”

He said he and other shooting victims were on the sixth floor and that they were surrounded by a “fantastic staff … all of them … nurses were wonderful and the officers and administration were really wonderful.”

Dr. Donald Davenport, via email, said as a surgeon in a rural community, “one would never expect to have a mass shooting.”

He said the thought of “that just doesn’t happen here” is what many thought about the Permian Basin. “In one instant that all changed and forever impacted our lives. People out doing daily activities were affected. This community will be forever bound by our reactions. First responders in the field, our police force and our hospitals rose to heroic efforts and performed beyond expectations.  We can never repay this service to humanity: love and kindness without thought.”

Davenport said as a physician with the opportunity to care for an injured patient that he wanted to thank the patients.

“Thank you for recognizing and thanking us. Thank you for never uttering a negative word about the circumstances that occurred. Thank you for digging deep and helping us begin a healing process, physically, emotionally and spiritually. We can all learn from your personal experience,” Davenport said.

The MCH doctor concluded with a good word for Joe Glide. “I hope this finds you in good health Mr. Glide and everyone else who was impacted.”

Glide spent six days at MCH and in wound care for several weeks. He was amazed at the medical treatment and his road to recovery and impressed by important visitors including Texas Gov. Greg Abbott, Lt. Gov. Dan Patrick and U.S. Senator Ted Cruz (R-Texas).

All spent time with him and others asking about his comfort and recovery.

Glide seems reflective when speaking about Ator. He said he still doesn’t know much about how Ator got the weapon that he used that day to terrorize the Permian Basin. “Last thing I heard was that someone in Lubbock sold him that gun … he wasn’t supposed to have it ….

“I heard he had money trouble and was going through a divorce and that he … he maybe just wanted someone to kill him.”

He also wonders if Ator wanted to commit suicide by cop but also wonders aloud why he had to take so many innocent lives with him if that was the case.

Born and raised in Sacramento, Calif., Glide is well traveled and even spent four months traveling the world in his younger years.

Now 61, he is optimistic about the future and repeatedly remarks that he is lucky. He also talks several times about the tragedy of the lives lost that day and lingers on the youngest victims “… that teenage girl? Who would shoot a teenage girl or a mail carrier or a little baby girl in her face?”

Glide details that his 10 angels went to work early in his life. A hernia at about 1-year-old should have been fatal but his family lived across from a hospital and he was rushed over and saved.

He said he has had many, many close calls including a car accident about 20 years ago when a car going 60 mph slammed into his driver side. He walked away with just an internal bruise on his leg — much to the amazement of the first responders that day.

He said he came to Odessa about three and a half years ago and opened his own oilfield services company that, despite less than stellar oil prices and COVID-19, remains busy today.

He said he didn’t think of leaving Odessa following the Aug. 31 mass shooting. He enjoys the area, although it is not as scenic as his native California. “I like it here. I like the people and the work.”

He is fortunate, he said, that the community rallied around all of those who were impacted by that day. He is thankful for the funds raised and the help with medical bills and the helping hands that reached out to him both directly after the shooting and during the year since.

“It’s really wonderful and uplifting to see all the support I was getting.”

He questions the randomness of the shootings and how he, the lucky one with angels and cat lives, had leg issues and some wound care instead of a funeral or a lengthy and painful physical recovery as others who were shot that day.

He’s so positive about life and his spirituality and his hopes for the future.

He’s thankful for that unknown OPD officer and the DPS troopers and all the medical staff at MCH and the generosity of Odessans.

“I was one of the blessed ones,” Glide said.