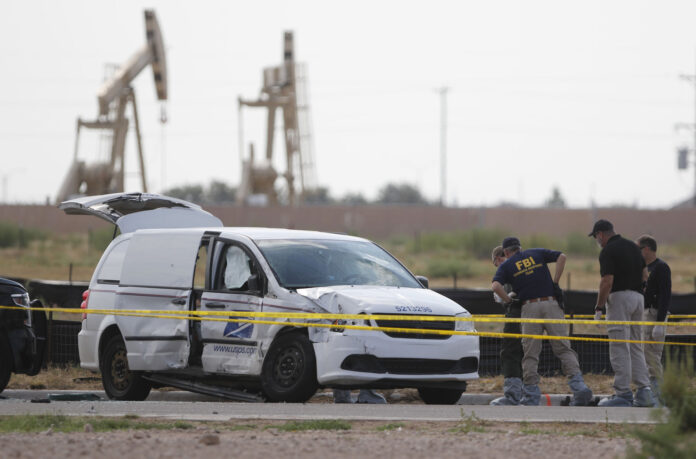 A final report on the Aug. 31, 2019, mass shooting in Odessa was released Friday and sheds new light on gunman Seth Ator’s wild rampage through Odessa and Midland that left seven dead and more than two dozen injured.

The report puts the terror of that day into chronological order publicly for the first time and does declare Ator as the lone gunman. Ator was shot and killed by multiple law enforcement agencies as they made a final stand in a field nearly Cinergy Theatre and feared that Ator coming into contact with that busy theater would cost more lives.

The report details that local, county, state and federal law enforcement agencies responded to the Midland/Odessa area in response to emergency calls as an unknown person(s) drove through various parts of the two communities and randomly shot and or shot at many people, including a Texas State Trooper.

The report details that the day started at Journey Oilfield where Ator had just been fired and was refusing to hand over company property. OPD officers arrived but Ator was already gone.

OPD Officers James Santana and Taylor Box were the responding officers and at one point spoke with Ator over the phone. Ator reiterated his paranoid delusions and conspiracy theories centered around child pornography and that certain people were tracking him and impersonating him online. Ator made no claims or threats that he was planning to shoot anyone.

Moments later, emergency dispatchers received calls that a man was recklessly driving a car, which matched the description of Ator’s car, along West Loop 338 in Odessa and the man was displaying a rifle.

The deadly shooting by Ator started with a gun battle with Midland County-stationed Texas State Troopers Melina Justiss and Charles Pryor were on patrol in Midland County near IH-20 and West Loop 250.

At about 3:17 PM, the troopers, who were unaware of Ator’s involvement in the disturbance a couple hours before in the neighboring county, initiated a traffic stop on Ator’s vehicle for the offense of Fail to Signal Required Distance. Ator fired multiple shots from a rifle through the back window of his car and into the front windshield of the trooper’s marked patrol vehicle.

Trooper Pryor, a front seat passenger, was immediately shot in the face and Trooper Justiss, the driver, narrowly avoided being shot as she returned gunfire with her handgun through her own windshield. Ator appeared to drive away but stopped along the shoulder of IH-20 about a hundred yards away from the troopers.

Ator briefly re-engaged the gunfight as he shot at Trooper Justiss, Trooper Pryor, and passing motorists. Trooper Justiss returned fire again using her handgun. It was later determined that some of Trooper’s Justiss’s bullets struck Ator’s vehicle. Ator sped away westbound on IH-20. Due to the serious injuries sustained by Trooper Pryor, the troopers were unable to give chase to Ator.

Ator, the report details, then drove along I-20 while off and on the phone with various 911 operators as he drove along side motorists and shot at them.

Ator shot Raul Garcia, Rodolfo Julio Arco, Brad Wayne Grimsley, Marco Corral, Efe Obayagbona, Fatai Quadri, Timmothy Hardaway, Joseph Glide and Daniel Munoz while on I-20. Ator taunted 911 operators about what he was doing as he fired shots into the motorists driving near him. Most of the people, whom Ator shot or shot at during this entire event were occupying motor vehicles.

The report continues that Ator eventually made his way to a centrally located residential area and began shooting again. Ator shot Wanda Silvas while driving on East 38th Street at Dixie and then drove south on Adams Street where he stopped his car next to postal worker Mary Granados as she sat inside her US Postal Service (USPS) delivery van. Ator shot at nearby motorists then yanked Mary Granados out of her USPS van by her arm and immediately shot her in the head.

He then drove through parts of West and North Odessa without shooting at anyone and ended up on north Yukon and Grandview where he shot and killed Kameron Brown. He next shot Joseph Griffith as he and his family were waiting at traffic light at Faudree and 191.

Meanwhile, Cinergy Theatre had been evacuated by law enforcement and as he drove through the parking lot of MCH’s procare he exchanged gunfire with MPD Officer Zachary Owens, wounding him and also wounding OPD Officer James Santana.

A number of other officers also engaged Ator.

THP Trooper Justin Basso fired a few rifle shots through the windshield of his own patrol vehicle and into the back of the USPS van. Ator drove aggressively towards a police roadblock that was shielding many theater evacuees on Dr Emmitt Headlee St.

OPD Officer Kaaiako Vavao and MPD Officer Addison Prater, used their marked patrol vehicles to create the roadblock in front of Ator. As Ator closed in on their positions, the officers simultaneously employed two different tactics to counter Ator’s assault. Officer Vavao fired multiple rifle shots directly into the windshield of the USPS van as Officer Prater aligned his patrol vehicle and accelerated to strike and deflect Ator’s vehicle before it could slam full force into Officer’s Vavao’s vehicle. The MPD vehicle struck the USPS van causing the van to turn sideways before the van struck the OPD vehicle. The series of crashes caused the USPS van to stop.

With the van’s airbags deployed, seeing into the van from the outside was difficult and officers had no way of knowing that Ator had taken a fighting position or a position of cover in the front passenger seat and floorboard. Officers Vavao and Prater were joined by University of Texas Permian Basin (UTPB) Police Department Lieutenant Brad Standerfer as the three briefly engaged Ator’s position inside the USPS van with gunfire. Ator remained inside the USPS delivery van where he was subsequently shot and killed as he engaged police officers in a brief gun battle.

The report also details misinformation and social media presented a challenge to law enforcement. It also details an overwhelming number of 911 calls.

The detailed report puts a timeline on Ator’s actions from that day and also details what weapons were found. He still had 58 unfired cartridges with him when he was shot and killed. He was shot at least 15 times and no drugs or alcohol were detected in his system. The report details a number of mental health evaluations and his interaction with police from as far back as 1993.

Season of Warmth to return to Jesus House