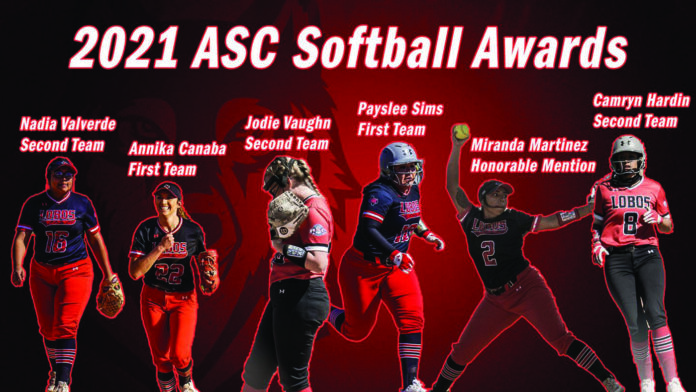 ALPINE Sul Ross softball saw six Lobos listed to the American Southwest Conference 2021 Softball All-Conference team in an announcement made May 14 by the conference office.

The tally included two on first team, three on second team, and one on the honorable mention list.

Canaba was fourth on the team with a .322 batting average in a second-best 87 at bats. She tied Camryn Hardin for a team-best nine doubles and was second on the team in several categories including six home runs, 22 runs batted in, nine walks and 20 runs scored. Her 28 hits on the season were good for third on the team.

On the basepaths, Canaba led the way with 12 steals in 15 attempts.

Canaba was named ASC West Hitter of the Week on March 8 after hitting .636 (7-for-11) with a double, home run, seven RBI, five runs scored and four stolen bases in a sweep of UT Dallas.

It is her second time listed to all-conference after being named to the honorable mention in 2019.

She joins Canaba on the all-conference list for a second time with an honorable mention in 2019.

Hardin led the Lobos with a .438 average and a team-high 96 at bats. She was tops with 42 hits, three triples, 30 runs scored, and 58 total bases. Her nine doubles tied Canaba for the team-high and she was 4-for-4 in stolen bases.

Vaughn finished with a 5.83 ERA but led the way in several pitching categories. Her seven wins, 11 complete games, one shutout, 92.2 innings pitched and 81 strikeouts were all best on the team.

She also added four hits, three runs batted in and two runs scored at the plate.

It is her second time on the all-conference list after being selected to the first team in 2019.

Martinez batted a fifth-best .310 on the season and led the Lobos with seven home runs and 27 runs batted in. Her final home run and RBI came on a walk-off shot in extra innings on March 6 against McMurry in what was her final regular season at bat as a Lobo.

On the mound, Martinez picked up three wins in 49.1 innings pitched with 12 strikeouts.