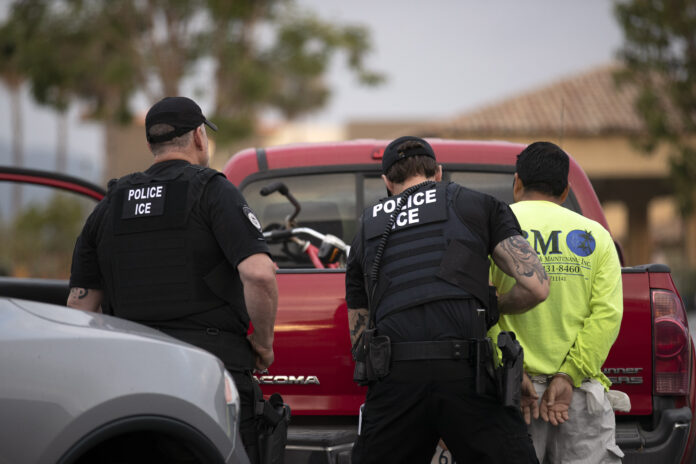 SAN DIEGO (AP) — During the Trump administration’s final weeks, the Department of Homeland Security quietly signed agreements with at least four states that threaten to temporarily derail President Joe Biden’s efforts to undo his predecessor’s immigration policies.
The agreements say Arizona, Indiana, Louisiana and Texas are entitled to a 180-day consultation period before executive branch policy changes take effect. The Biden administration rejects that argument on grounds that immigration is solely the federal government’s responsibility under the Constitution.
Former President Donald Trump relied heavily on executive powers for his immigration agenda because he was unable to build enough support for his policies in Congress. Now some of his supporters say Biden is going too far in doing the same to reverse them.
The first legal test is in Texas, where the Republican governor and attorney general are challenging the Democratic president’s 100-day moratorium on deportations, which took effect Friday.
The Homeland Security Department told lawmakers shortly before Biden’s inauguration last week that it reached nine agreements, mostly with states, according to a congressional official speaking on condition of anonymity to discuss information that is not yet publicly available.
The department declined to comment, citing the lawsuit. The Trump administration, usually eager to trumpet immigration enforcement, stayed publicly quiet on the agreements, which were first reported by BuzzFeed News.
The nine-page agreements known as Sanctuary for Americans First Enactment, or SAFE, are expansive. They require that state and local governments get 180 days’ notice of changes in the number of immigration agents, the number of people released from from immigration custody, enforcement priorities, asylum criteria and who qualifies for legal status.
Without offering evidence, the agreements say looser enforcement can hurt education, health care, housing and jobs.
Sheriff Sam Page of Rockingham County, North Carolina, on the Virginia border, signed an agreement on Dec. 22.
“Any incoming administration is likely to make changes in policy,” the sheriff said. “Policy changes at the federal level affect us on the local level. It is our hope that the SAFE agreement will foster timely communications about any significant forthcoming policy changes. We are simply asking for notice of these changes.”
Louisiana Attorney General Jeff Landry, a Republican, signed an agreement on Dec. 15 to “stem the tide of illegal immigration,” spokesman Cory Dennis said.
“While some may attempt to blur the lines, there is a difference between legal and illegal immigration, and it is important to recognize that,” he said. “Our office will continue to be a watchdog for any changes to immigration policies that may be detrimental to the people of Louisiana.”
In Indiana, former state Attorney General Curtis Hill, a Republican, signed the agreement on Dec. 22. Lauren Houck, a spokeswoman for the state attorney general, said it will remain in place after an initial review.
Katie Conner, a spokeswoman for Arizona Attorney General Mark Brnovich, confirmed that the state signed, saying it “has numerous cooperative agreements with federal, state and local enforcement agencies, including DHS.”
In addition to the deportation moratorium, the Biden administration suspended a policy to make asylum-seekers wait in Mexico for hearings in U.S. immigration court. Six of Biden’s 17 first-day executive orders dealt with immigration, such as halting work on a border wall with Mexico and lifting a travel ban on people from several predominantly Muslim countries.
Hiroshi Motomura, a professor of immigration law and policy at the University of California at Los Angeles School of Law, called the agreements “a very unusual, last-minute sort of thing” and said they raise questions about how an administration can tie the hands of its successor. He believes a deportation moratorium was within a president’s power.
Steve Legomsky, professor emeritus of the Washington University School of Law and former chief counsel for U.S. Citizenship and Immigration Services, said the agreements are “a terrible idea” that could create “a race to the bottom,” with states opposing immigration competing against each other to drive immigrants elsewhere.
“For our entire history, immigration policy has been understood to be the exclusive responsibility of the federal government,” Legomsky said.
Keeping immigration enforcement with the federal government allows the nation to speak with a single voice as a matter of foreign policy and consistency across states, Legomsky said. We "can’t have 50 conflicting sets of immigration laws operating at the same time,” he said.
The Biden administration made similar arguments in a court filing Sunday after Texas asked a federal judge to block the deportation moratorium.
Texas, which has led a challenge to the Deferred Action for Childhood Arrivals program to shield hundreds of thousands of young people from deportation, argued that the moratorium violated its agreement with Homeland Security. The state also argued that the moratorium violates federal rule-making procedures.
U.S. District Judge Drew Tipton in Victoria, Texas, who was appointed last year by Trump, held hearings on Friday and Monday to consider Texas’ request.
———
Associated Press writers Ben Fox in Washington, Gary Robertson in Raleigh, North Carolina, Casey Smith in Indianapolis, Melinda Deslatte in Baton Rouge, Louisiana, and Anita Snow in Phoenix contributed to this report.
———
This story was first published on Jan. 25, 2021. It was updated on Jan. 26 to correct the attribution for a statement about Indiana’s decision to keep an agreement with the Department of Homeland Security in place. That should have been attributed to Lauren Houck, a spokeswoman for the state attorney general, not Rachel Hoffmeyer, a spokeswoman for the governor.