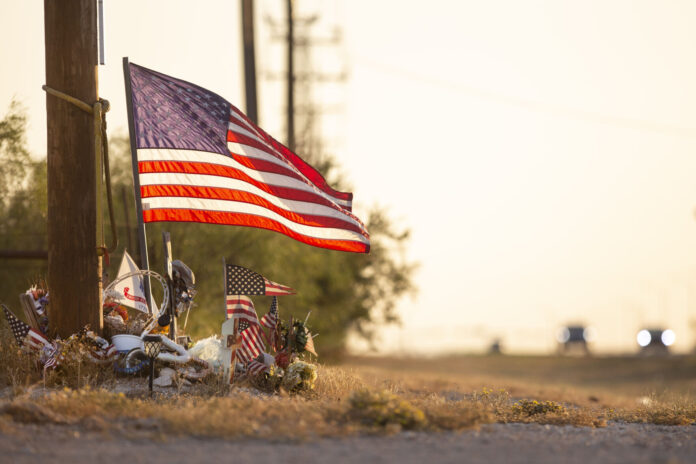 In the year since Kameron Brown’s death, his family and friends have learned to deal with the tragedy while acknowledging the sense of loss they all feel.

“It’s hard not having him around,” Carlton Brown said of his brother. “He was our laughter, always the life of our family. He always made sure everybody was happy. That’s the kind of guy he was.

“It’s been crazy. We lost Kameron and right after that, like a month later, I lost another friend of mine. And then right after that it was coronavirus. It’s been a wild ride. I do have good people around me to keep my spirits up. It’s just been a weird time in the world.”

Kameron Brown was one of seven people killed by gunman Seth Ator during a mass shooting on Aug. 31, 2019. The 30-year-old Brown worked at Standard Safety & Supply, a first-aid and fire protection service based in Odessa. He was in his company vehicle on his way to work when Ator pulled up beside him in a stolen U.S. Postal Service vehicle and opened fire.

A memorial near Ratliff Stadium where Brown’s vehicle would come to a stop that day still stands.

Carlton Brown said the past year has been one of emotional ups and downs for those close to Kameron, from mother Mary Brown, father Carl Coleman, brother Carlos Washington, sisters Shana and Tiffany Brown to aunt and uncle Teresa and Ronni Hogan.

“Honestly, everybody’s been dealing with it pretty well,” Carlton said. “They have their lapsed moments where they go back into it every once in a while. It hasn’t really been easy, but everyone has been taking it pretty well, I think.

“It comes and it goes. One day I’m fine and the next day I’m in a puddle of tears. I really haven’t figured out how to deal with it myself. I try to stay busy. That’s what my mother does, I know that’s what I and I know my sisters and older brother do, as well.”

Carlton Brown, who works for an auto dealership in Sacramento, California, said the family has worked among themselves to honor Kameron’s memory and serve as a support group for each other.

“We’re doing the best we can in our lives to honor him in the best way we can,” he said. “I just make sure that I find time to call everyone and check up on everyone as best as I can.”

The biggest change in the past year, Carlton said, has been in how he relates to others.

“I’m really focused in on people,” he said. “I don’t worry too much about the money aspect of life. I really just focus on taking care of the people that are around me. You just never know. That’s not something you expect to happen.”

Family members from across Texas and California spoke at Kameron’s funeral, which was held Sept. 12, 2019, at Victory Life Church in Brownwood. The Abilene Reporter-News reported at the time that Mary Brown said her younger son “was my heart, just as all of my children are. This hit me hard. My life will forever be changed. But looking out into this room, I can tell he was loved.”

The Reporter-News article quoted other family members who spoke during the service, with aunt Teresa Hogan telling of conversations she had with Kameron.

Washington, who lived in California while Kameron was in high school, said: “It’s been a long time since I’ve seen my brother. This showed me a lot of people loved him.”

Kameron and Carlton Brown grew up in Coleman and graduated from Coleman High School a year apart. While Carlton went to college, Kameron enlisted in the U.S. Army and served in Afghanistan and Iraq. To have his brother survive combat only to die after coming home was particularly difficult to accept, Carlton said.

“That was probably the biggest heartbreaker of all,” he said. “You don’t expect somebody to go into … at that time in the world, we were at war. This was one of the biggest wars we’ve had in our lifetime, that we’ve ever seen.

“For him to survive that, to even walk out of it unscathed and make it home, and then to lose his life the way that he did, it just doesn’t make sense. Even with that being said, there’s just so much turbulence that I still don’t understand. For all the families, everyone who lost their life and everyone who was injured in this, I feel like there needs to be some kind of change.

“It was a senseless thing. I’m not trying to place any blame, but there was a ball dropped somewhere.”

Carlton Brown said his brother battled PTSD in the years since receiving a medical discharge from the Army, but had worked hard to deal with his issues.

“I watched my brother from when he was a kid and the stuff we had gone through as youngsters, he was a happy person,” Carlton said. “From going into the military to getting out of the military, you could see the change in him. When PTSD would kick in, he would start tripping out and get aggravated about things.”

Carlton said the move to Odessa to work for Standard Safety & Supply was a major step forward for Kameron.

“He was struggling to get his life together,” Carlton said. “I’ll never forget the day we sat down and I told him to just drive to Odessa if you really want to get your life together. It had been hard for him to get and keep jobs. I said drive to Odessa and go straight to the company and tell them you want a job. Fill out the application and hand it to them.

“He got hired when he got out there and he had been doing good. He was in a very happy place. Since the military, that was the first time I’d seen him as happy as he was. He was in the best place he’d ever been in his life since he came back.

“It was a blessing to see him and him tell me how happened he was. I had literally just gotten off the phone with him a couple of days before all of this happened. For him to go like that was wild for me. That was the craziest thing in the world.”