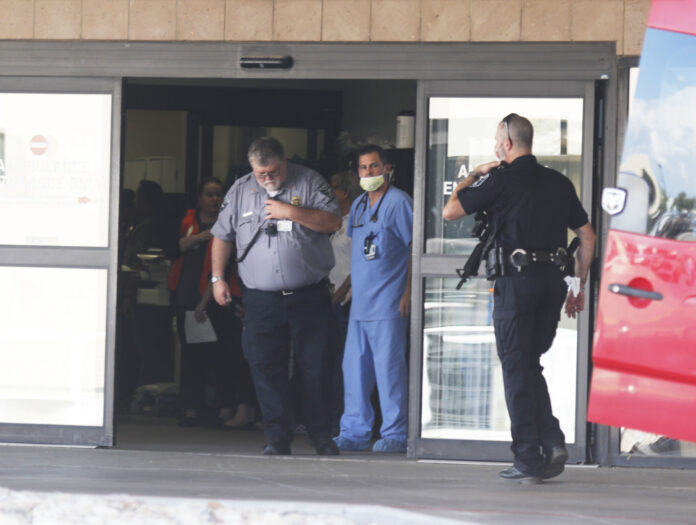 There are less than 10 patients remaining in the three major hospitals in the Midland-Odessa area a week after a gunman killed seven people and injured 25 others during a wild shooting spree around mostly northeast Odessa.

The gunman was gunned down himself by law enforcement near Cinergy Theatre.

Tasa Richardson, public relations director for Midland Memorial, said over the phone Friday afternoon that the three patients remaining at the hospital are in stable condition.

“We have a disaster preparedness program in which we prepare as much as we can for any incident that we can prepare for,” Richardson said. “The situation we encountered Saturday is unprecedented in our community. We are very proud of the efforts of our staff, of our nurses, of our physicians and everyone that played a part on behalf of Midland Memorial.”

“Overall, our administration is very proud of the doctors and nurses for taking this on,” said Madison Tate, the director of marketing and community relations at ORMC. “It was a shock to everybody. You can never expect something like that to take place, but we were readily available.”

The shooting spree that shocked Odessans started after Ator was pulled over by Pryor for a minor traffic infraction. That occurred just after Ator was fired from his job and after both he and his employer call 911.

Ator also called the FBI tip line and rambled saying that people had committed “atrocities” against him. FBI and OPD officials have said he did not make any threats during either call. He shot Pryor and then drove around Odessa randomly shooting at people, eventually killing postal worker Mary Granados and carjacking her postal mini-van. He drove the van and continued his shooting spree until he was confronted by multiple law enforcement officers near Odessa’s Cinergy Theatre.

A member of the ATF office in Dallas returned an email late Thursday evening that detailed Erin Dooley, public information officer for the United States Attorney’s Office for the Northern District of Texas, is the primary point of contact for all Odessa-related media requests. Dooley returned an email late Friday afternoon that detailed “we can’t make any comments beyond what we’ve already said publicly at this time.”

Questions still remain about how, where and when Ator obtained the AR-15-style rifle used in the shooting spree. He reportedly obtained an AR-15 through a private sale, which allowed him to evade a federal background check.

CNN reported on Wednesday evening that the gunman failed a background check when he attempted to purchase a firearm in 2014 because he had earlier been adjudicated “a mental defective” and was temporarily committed to an institution.