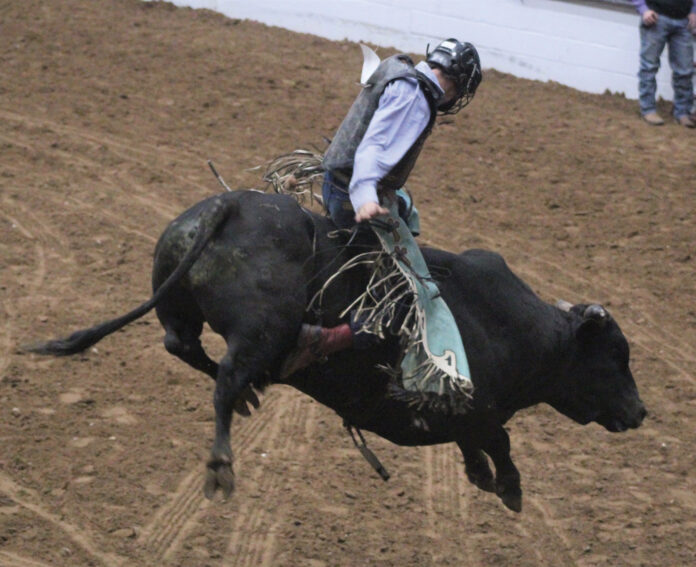 Traveling on the road from town to town and competing in different rodeos is all part of the business and Reid Oftedahl and Blaine Beaty both understand that all too well.

Traveling from Minnesota along with Coy Thorson, who’s also a Minnesotan, the three bull riders competed in Odessa for the first time in their rodeo careers Thursday night at the SandHills Stock Show and Rodeo at Ector County Coliseum.

For some riders, being on the road for a long stretch might mean homesickness and missing family members, but Oftedahl, who’s from Raymond, Minn., relishes the traveling opportunities, saying that it is his favorite part about competing in rodeos.

“I like meeting people and going to different places and states,” Oftedahl said. “That’s the best part of it.”

The 27-year-old Oftedahl has been competing in rodeo for most of his life.

“I started out riding sheep and then went on to cows and bulls,” Oftedahl said.

Oftedahl has been riding bulls since he was around 8 years old.

For all three riders, it’s their first professional rodeo of the new calendar year.

For Oftedahl, it felt great to be in the Permian Basin for the first time.

“It feels great to be in town and it’s great to be back on the road,” Oftedahl said. “We appreciate the rodeo committee for having us here.”

Oftedahl said he and his buddies are glad to compete in as many rodeos as they can, especially after the pandemic shrank the number of rodeos they got to go to last year.

“Oh gosh, we went from 100 a year to like 20 last year.” Oftedahl said. “The way it’s looking this year, it might be the same boat. But they might have (the virus) under control. We might have a few more but it’s going to be a slow year. We’re just going to roll with them and compete at as many as we can.”

Beaty hails from Frazee, Minn. All three members know each other in some way. Thorson hails from Fergus Falls, Minn.

“Me and Coy are around the same age,” Beaty said. “We go back. Coy and Reid have known each other for a while.”

Beaty, 21, has been riding for 11 years now, but this is his first year going on a long stretch from rodeo to rodeo on the road.

And no, there’s no homesickness for him, either.

“These guys are my family,” Beaty said.

Beaty was happy with his performance on Thursday night.

“The bull was supposed to come around and buck a little harder but he just jumped around. It was still all right,” Beaty said.

Oftedahl was also satisfied with his performance but is hoping to do better.

“I rode the bull to the whistle,” Oftedahl said. “You just have to count your blessings and get on the bull the next time.”

Like with Oftedahl, Beaty is trying to find a positive with limited rodeos in the past 12 months due to the pandemic.

“It’s been tough but we make the most of it,” Beaty said.

Regardless, the goal remains the same for everyone.

“The goal is to make it far and to the finals,” Oftedahl said.

The next rodeo for them is up in Rapid City, South Dakota.

“I’ve never been to Rapid City, South Dakota, so it’ll be my first time,” Beaty said. “I’m ready to go. This was my first time here in Odessa and now I’m looking forward to the next rodeo.”