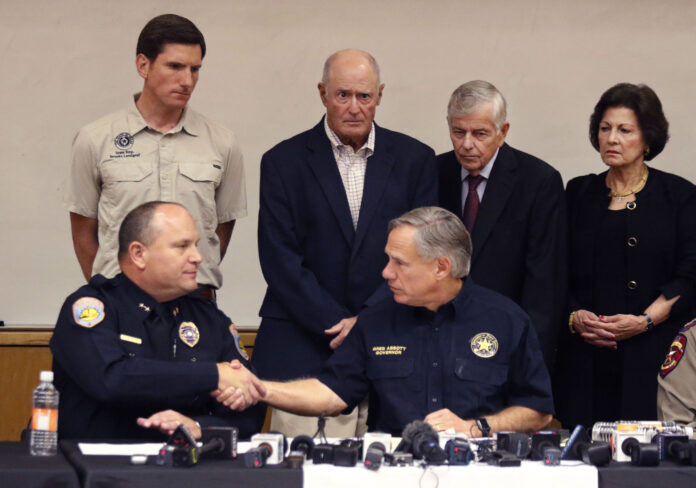 EDITOR’S NOTE: This is another in a series of stories detailing the events of Odessa’s Aug. 31 mass shooting. The stories are based on police reports that were released Jan. 27 following months of records requests to the City of Odessa.

Prior to a 36-year-old gunman going on a shooting rampage that continues to terrorize Odessans, Seth Aaron Ator had a handful of run-ins with the Odessa Police Department.

None of the run-ins indicated that Ator would kill seven people and injure 25 others during an hour-long shooting spree that began on Interstate 20 in Midland County and ended with him being shot to death by multiple law enforcement agencies at Odessa’s Cinergy Theater Aug. 31, 2019.

The reports filed with OPD range from cyberstalking to human trafficking to believing his ex-girlfriend was attempting to have him killed. Those reports were filed in 2015 and 2016.

Ator also had two other run-ins with OPD when he was charged with public intoxication in 2014 and received a criminal trespass warning in 2017. Ator was arrested and charged with public intoxication May 25, 2014, after he was reportedly being verbally aggressive with a customer at Zucchi’s Sports Bar. Ator received a criminal trespass warning June 6, 2017, after he caused a disturbance with employees at the AT&T Store located at 4937 E. 42nd St. in Odessa.

In the first report Ator filed with OPD, he stated on March 17, 2015, that he believed AT&T, Verizon Wireless, Sprint, Grande Communications and Clear employees were broadcasting his information over their websites and claiming he had committed cyberstalking. Ator stated he was physically assaulted and his vehicle had been damaged due to the actions of those companies.

The final sentence of that police report states: “Ator insisted on a report to document the incident. Ator’s witness statement has been dropped in records.” An email from the City of Odessa sent to the Odessa American detailed “there were no records to this request.”

On Dec. 3, 2015, Ator returned to OPD to file a report that his ex-girlfriend had put a hit out on him. Ator walked to the OPD front desk at 3:30 p.m. and stated he lived in the 7200 block of West University Boulevard in West Odessa and he was visibly shaking and mumbling about Muslims, AT&T and Verizon Wireless.

Ator was reportedly told that because he didn’t live within city jurisdiction that he needed to file the report with the Ector County Sheriff’s Office. Ator became more upset and took his cellphone and said he was going to call AT&T.

Ator returned for a third time at 6:10 p.m. and stated that his girlfriend stole a watch and damaged his vehicle by wrecking it, the police report detailed. The officer asked Ator if his girlfriend had consent to drive his vehicle when she wrecked it and he stated she did.

Nearly a year later, Ator returned to OPD on Nov. 27, 2016, and stated he wanted to report human trafficking.

Ator gave 16 papers with photos and messages regarding two females that he believed were being brought to Odessa from Mexico to perform sexual favors, the police report detailed. Ator stated that he met and spoke with two girls a year ago, and at that time, one of the girls told him that she was being forced to be there.

Ator reportedly attempted to contact the female and was unable to. Ator believed the girls were being brought to Odessa from Juarez. He also believed that the girls were using Motel 1 and Studio 6 to work out of. He also stated he spoke to a man who set up the appointments for the girls via phone.

In a witness statement Ator submitted to OPD records, he claimed “they (the girls) are under the control of a pimp from the Juarez Cartel who is trafficking them across and paying off the border immigration with drugs and sex for safe crossing in El Paso.” Ator also claimed the girls only spoke Spanish.