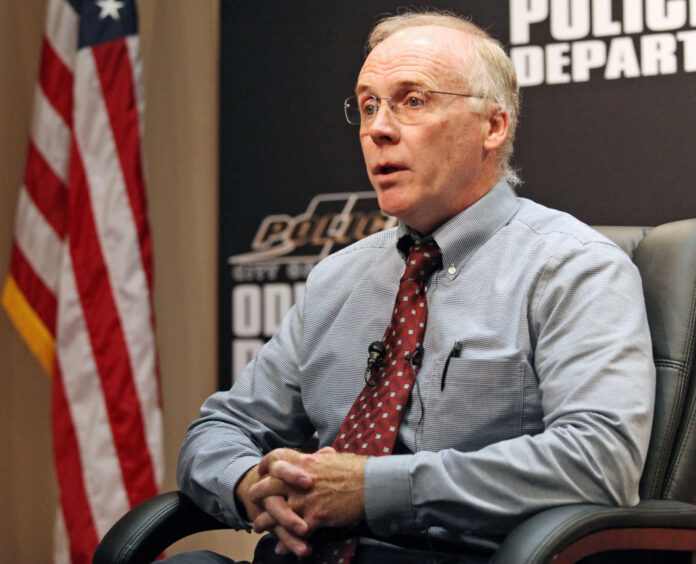 Odessa Police Chief Tim Burton found officers were justified in pulling over District 1 Councilman Malcolm Hamilton on Feb. 1, a traffic stop that led to an explosive reaction by the elected official.

An inquiry released to the Odessa American late on Tuesday and completed earlier that day showed Burton found “insufficient evidence to warrant (an) investigation” from what the chief has said appeared early on to be a legitimate stop. The ticket was ultimately dismissed on the grounds that the offense cited by police did not justify prosecution — Hamilton’s behavior aside.

Hamilton refused to answer questions from the Odessa American. But in an on camera interview with CBS 7 Hamilton denied committing an offense, and the station reported that he still believed the stop was illegal.

“I think any citizen who feels like they are being harassed or profiled would more than likely act in the same manner,” Malcolm told CBS 7.

During the stop, Hamilton shouted expletives, accused officers of lying and vowed to complain to Burton about the traffic stop he protested as illegal.

“Call your commander right now,” Hamilton yelled at several officers. “Because I am your boss. You understand that? I am a city councilman. You do understand that right? You are going to sit up here and stop me illegally like this?”

On camera, he claimed in the interview he was not trying to abuse his position as a councilman.

“It wasn’t a matter of me trying to use my influence, it was more of a matter of me giving the man my card to subside some of his anxiety possibly, or maybe his aggression,” Malcolm said. “Ok, he’s in a high crime neighborhood, it’s more or less like, hey guy, I’m a good guy.”

But footage shows the officer, along with the four additional police officers who arrive, remains calm throughout the traffic stop.

The officers belong to the Community Response Unit, which was investigating the 700 block of Snyder Street where Hamilton was pulled over along with three other blocks in the area “due to a citizen’s complaint” about drug activity, according to the completed police review.

“The unit relies on involvement and feedback of the community,” the report states.

Deputy Chief Mike Gerke wrote to the chief, after reviewing police video and reports, that “probable cause existed for the stop and that the officers did not violate any state laws or city policy.”

The parking citation was for a minor offense.

But often, police officers who are on a targeted drug detail in an area flagged as high crime will enforce minor traffic violations more aggressively than they would otherwise during a routine patrol, police say. The purpose is to maximize the number of contacts they have in the neighborhood and crack down on drugs.

Sometimes that means pulling over citizens for a minor offense, suspecting them of no other wrongdoing and letting them go. Other times, police say the stops lead to investigations of more serious crimes or help with other cases.

The officer who stopped Hamilton was Cpl. Lyle Hahn, who is under internal investigation on separate accusations that he falsified a search warrant to cover up an illegal search of a hotel room in January by police including other members of his unit. Burton says Hahn’s behavior in the other case is irrelevant to Hamilton’s stop.

Hahn initially reported Hamilton committed two traffic offenses: parking facing traffic and driving on the wrong side of the road.

But Hahn only gave Hamilton a ticket for the parking offense, reporting he did not fill out a separate citation “due to Malcolm’s aggressive demeanor and being uncooperative from the beginning of the traffic stop.”

Hamilton ultimately escaped the parking ticket. A prosecutor with the City Attorney’s office dismissed it Feb. 13.

Hamilton insisted during the stop captured on video that the only reason he parked was to comply with the stop and was otherwise preparing to back into his driveway.

And City Attorney Larry Long said Tuesday he did not know which prosecutor dismissed Hamilton’s ticket and still had not seen footage of the traffic stop that was published by the Odessa American and broadcast on TV. But Long still provided the prosecutor’s reason for the dismissal.

“If you are going to get pulled over and ticketed for parking, you are generally parked,” Long said. “I mean, and they are saying he was illegally parked. He was in the car, he had the lights on, he had the motor running.  . . . Most people wouldn’t consider that being parked.”

Long said Hamilton “never talked to me” about the ticket and said the councilman’s prominent position had nothing to do with the dismissal.

“It could have been anybody,” Long said. “It had nothing to do with who he was.”

In this case, CRU officers apparently didn’t know Hamilton was a councilman, the review found.

One of the officers at the stop, Cpl. Zak Kraft, wrote in his report that “I found Malcolm Hamilton to be very unprofessional and disrespectful for being (an) elected official for the City of Odessa.”

Fellow council members have not spoken publicly about Hamilton’s behavior during the traffic stop. Asked whether it’s acceptable to talk to rank-and-file city employees the way Hamilton did, District 5 Councilman Filiberto Gonzales promptly ended an on camera interview. Gonzales said he did not watch the video of the traffic stop and did not know if he would make the time to do so.

By Wednesday evening, Mayor David Turner said he had seen only snippets of the traffic stop footage and had not reviewed the full police videos delivered to him that day.

He declined to discuss what he had seen so far. But he said he was planning to discuss the traffic stop with Hamilton.

“I don’t want to speak until I’ve actually seen something,” Turner said.

But Gardner said all council members should speak respectfully to rank and file city employees.

“It sets a bad example for anyone in the public eye to have a confrontation with someone when the problem can be dealt with when there is not a high tension, when people have a chance to step back and calm down,” Gardner said.