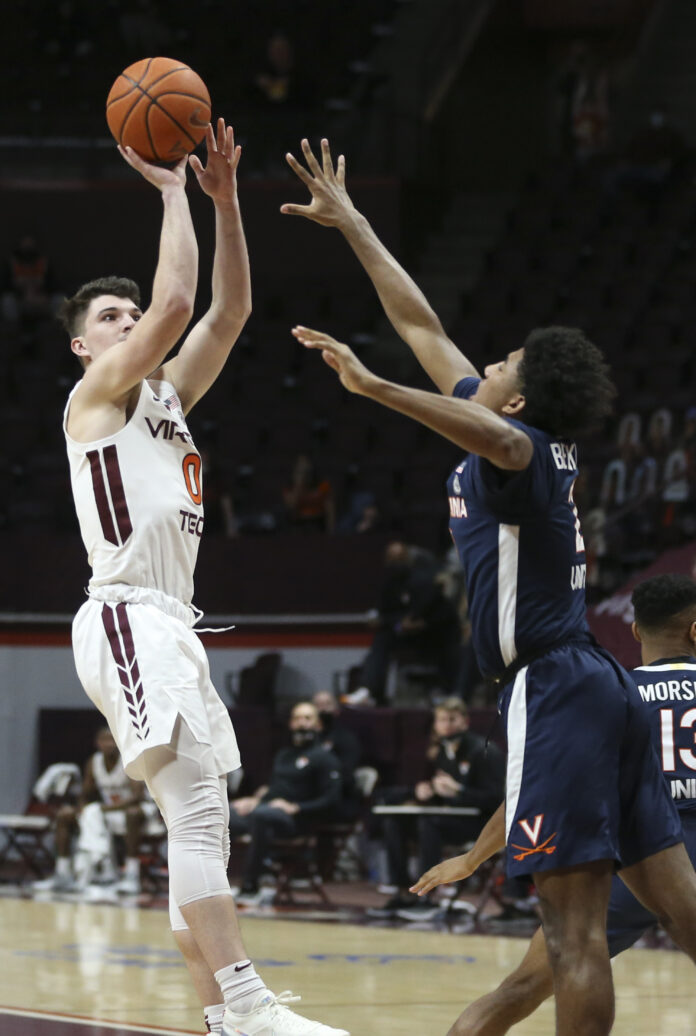 BLACKSBURG, Va. (AP) — Keve Aluma scored a career-high 29 points to lead No. 20 Virginia Tech to a 65-51 win over No. 8 Virginia on Saturday night.
Aluma hit 10 of 15 shots from the floor, including two 3-pointers, to help the Hokies (13-3, 7-2 Atlantic Coast Conference) rally from a 10-point deficit in the second half. The victory snapped a four-game losing streak to the rival Cavaliers and marked the Hokies’ fourth victory over a ranked team this season.
“It’s significant now,” Virginia Tech coach Mike Young said. “But let’s hit the brake. It’s late January. They’re not putting a crown on anybody’s head in January. We’ve got a bunch of head-knockers to go. … Great win for us. We played a really good ball game against a really, really good team, but let’s hang on. We’ve got a lot more to look forward to, we hope.”
Jay Huff paced Virginia (11-3, 7-1) with 13 points. The Cavaliers saw their seven-game winning streak and 15-game ACC winning streak halted.
The Hokies trailed by 10 early in the second half, and outscored Virginia 21-4 to end the game. That outburst included a 19-0 run in which Aluma scored seven points and Hunter Cattoor hit two 3-pointers.
“I think we had all seen that no one thought we were going to win this game,” Aluma said. “I like it when it’s like that. I like it when people don’t think we’re going to win. That just fuels us even more.”
Cattoor finished with 15 points for Virginia Tech, which became just the third team to shoot at least 50% percent against the Cavaliers this season (22 of 44).
Kihei Clark scored 11 points for the Cavaliers, who made just one shot from the floor in the final 8:25.
“You just can’t have big gaps (in the game) where you’re not getting stops or being assertive enough,” Virginia coach Tony Bennett said. “It was too easy for them. … There needed to be a little more assertiveness (on offense) maybe trying to touch the post or hard drives with some finishes.”
BIG PICTURE
Virginia: The Cavaliers suffered an uncharacteristically poor performance defensively, particularly in the second half when they allowed Virginia Tech to shoot 61% (14 of 23). Virginia was particularly vulnerable in the post, using four post players on Aluma at various points, with no success. The Cavaliers’ post players will need to be stronger and tougher, or else teams will continue to expose them going forward.
“Defensively, we kind of laid down and that’s not going to get it done,” Bennett said. “Finesse does not work in this league, and we looked very finesse-y today.”
Virginia Tech: In contrast to the Cavaliers, the Hokies were outstanding on defense, holding the ACC’s best shooting team — 50.4% coming into the game — to just 37% (19 of 52). They also held Virginia to its lowest point total of the season. The Hokies picked up their fourth win over a ranked team this season, including two top-10 wins, and continue to position themselves for a high seeding come tournament time in March.
“That performance defensively was, needless to say, exceptional,” Young said. “But it’s not a surprise. I can assure you of that.”
POLL IMPLICATIONS
With two wins in the last week, including one over a top-10 team, the Hokies should move up several spots in the poll, while Virginia will fall several spots.
UP NEXT
Virginia: The Cavaliers play at N.C. State on Wednesday.
Virginia Tech: The Hokies play at Pittsburgh on Wednesday
———
More AP college basketball: https://apnews.com/hub/college-basketball and https://twitter.com/AP—Top25