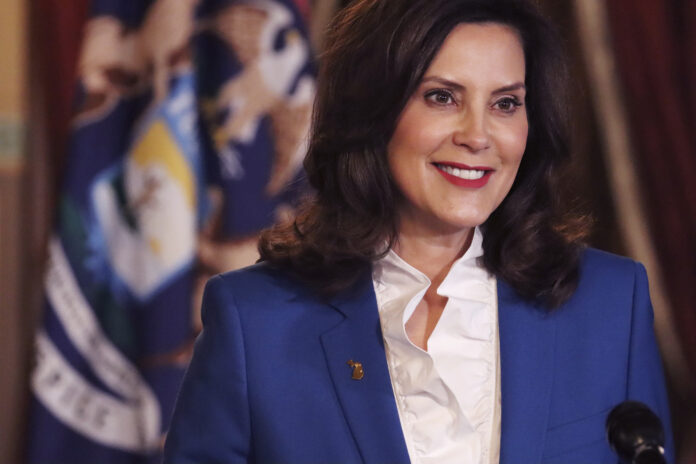 LANSING, Mich. (AP) — The fight over whether to allow youth contact sports took center court Thursday in Lansing as Michigan lawmakers heard testimony from educators, parents and students wanting to get back to competition.
Even though a ban on indoor dining ends Feb. 1, youth contact sports, including winter high school seasons in basketball, hockey, wrestling and competitive cheer, remain off-limits because of the coronavirus pandemic. Gov. Gretchen Whitmer declined on Monday during a news conference to set a date for the sports to resume.
Whitmer has said aggressive actions to slow the spread of coronavirus are needed and the data is being monitored to determine next steps. But critics say Whitmer sets arbitrary deadlines and moves the goal line each time.
Both the state Senate and House held committee meetings Thursday to allow those affected by the prohibition to testify about their desire for winter sports to resume after three months of being banned.
Republican Sen. Dale Zorn, who sponsored a resolution, which passed in the state Senate on Thursday, to urge Whitmer and the state health department to allow youths to participate in contact sports again, testified in the state Senate Education and Career Readiness Committee that though the orders are meant to protect students from COVID-19, they are hurting their mental health.
“As a result of school closures, students are suffering from crippling isolation, which is severely harming their mental health,” Zorn said. “All they want is to be able to compete with their friends and to be the very best that they can be. They don’t understand why their school experience, their lives, potential scholarships, have been blocked without explanation.”
Jayme McElvany, founder of the Let Them Play movement and a football mom from Milan, Michigan, told legislators that student athletes are victims of political games even though they have followed COVID-19 rules. The Let Them Play Facebook page had nearly 34,000 members as of Thursday who support youth sports resuming
“It’s a sad state that we are in when an entire generation of kids who will soon be of voting age have lost all faith and their voices being heard by their elected officials,” McElvany said. "I’ve had many kids messaging me saying ‘Miss McElvany, is there anything you can do to help us, because I don’t think I can deal with this much longer’.”
In the state House Oversight Committee, Rep. David LaGrand said negative emotions over the pandemic aren’t just limited to students. The Democrat from Grand Rapids said the state should consider starting a campaign to make residents aware of maintaining their mental and physical health.
LaGrand said allowing sports to resume before students are vaccinated “seems to be roughly the equivalent of running a marathon and lighting yourself on fire just when you can see the finish line.”
But Ethan Coady, a high school senior hoping to compete basketball, said without sports students are being left without stress relief from the virus and social isolation. He said he’s being taught that the only way he can be a decent human being is going home and staying away from everyone else.
“When you try to voice your opinion about it, instead of people listening and understanding how you feel, you get bashed and told you’re being selfish and that you need to think of others,” Coady said. “We feel as if we are being punished for something we hate just as much as everyone else.”
———
Anna Liz Nichols is a corps member for the Associated Press/Report for America Statehouse News Initiative. Report for America is a nonprofit national service program that places journalists in local newsrooms to report on undercovered issues.