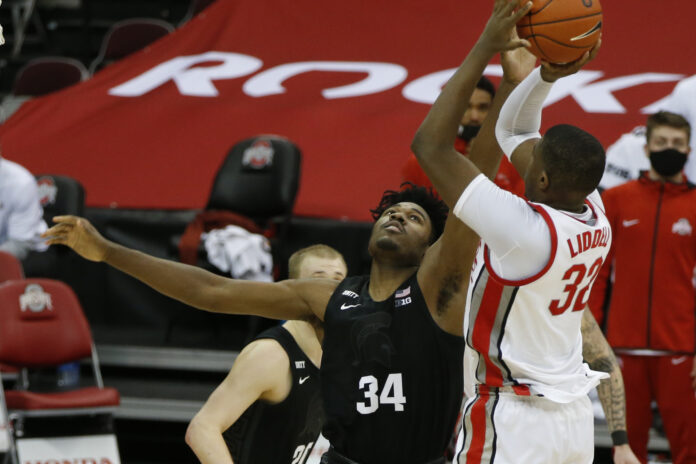 COLUMBUS, Ohio (AP) — No. 13 Ohio State caught Michigan State in the midst of a uncommon skid and beat the blue-blood Big Ten program for the first time in its last five tries.
The Spartans had 20 days off because of COVID-19 issues and then lost to Rutgers by 30 points on Thursday night. The shooting went cold again in the second half on Sunday, and the opportunistic Buckeyes cruised to a 79-62 rout.
Ohio State coach Chris Holtmann doesn’t expect to see the same team when the Buckeyes visit East Lansing on Feb. 25.
“Listen, I think they certainly missed some shots that they’ll make, and they’ll certainly make at their place and they’ll make once they get their legs back,” Holtmann said. “There’s not a better late-season coach in the country than Tom (Izzo).”
E.J. Liddell had 20 points and eight rebounds, and Justice Sueing added 17 to lead the Buckeyes (14-4, 8-4 Big Ten), who again played solid defense. They’ve won three in a row and six of seven.
Michigan State (8-6, 2-6) played better but still started sloppily, committing six turnovers and a dozen fouls in the first half while hitting two of their 10 3-point tries in the frame.
Joshua Langford led the Spartans with 14 points. They shot a dismal 32.1% as a team after managing just 28.6% against Rutgers.
“We took a small step forward in some ways but the shooting woes continue,” Izzo said. “When you don’t make shots, it’s hard to go down to the other end and defend.”
The Buckeyes led by 12 at the half Sunday behind nine points from Liddell and seven from Justin Ahrens, including a pair of 3-pointers. Five Spartans picked up two fouls each in the opening frame and that caused some shuffling of the lineup.
The Spartans got within nine with 4:20 left, but their shooting just got worse as they missed nine of their last 10 shots from the floor. They hit just 25% in the second half.
Meanwhile, the Buckeyes shot 45%, including 33% (6 for 18) from 3-point range.
“Our plan was to come out and set the rules early, be the more aggressive team, the tougher team,” said Kyle Young, who finished with six points and seven rebounds. “I think we were able to do that offensively and defensively early on, which kind of helped carry us throughout the rest of the game.”
BIG PICTURE
Michigan State: The pandemic has been tough on the Spartans, who were ranked as high as No. 4 in the AP Top 25 earlier this season. They’re trying to find their way back after the three-week layoff and a 67-37 loss on Thursday to Rutgers, a team that had never beaten them. If the slide continues, the Spartans’ streak of playing in 22 straight NCAA Tournaments — the third longest in the nation — could be in jeopardy. They were again without forward Gabe Brown because of COVID-19.
Ohio State: Holtmann has the Buckeyes moving in the right direction with a lot of bench players contributing. They avoided the ugly January swoon to which they have been susceptible the last couple of seasons.
“We’re very much a work in progress,” Holtmann said. “That’s still the case for us but there’s no doubt that this group has been a phenomenal group to coach.”
A DIFFERENT WORLD
The last time Ohio State beat Michigan State was Jan. 7, 2018, when the unranked Buckeyes upset the then-No. 1 Spartans 80-64 backed by ear-splitting crowd noise in a jammed Value City Arena. This time, because of COVID-19 restrictions, a few family and friends were scattered around the venue, and the chatter among coaches and players on the court was clearly audible.
UP NEXT
Michigan State: At No. 7 Iowa on Tuesday.
Ohio State: At No. 7 Iowa on Thursday.
———
Follow Mitch Stacy at http://twitter.com/mitchstacy
———
More AP college basketball: https://apnews.com/Collegebasketball and https://twitter.com/AP—Top25