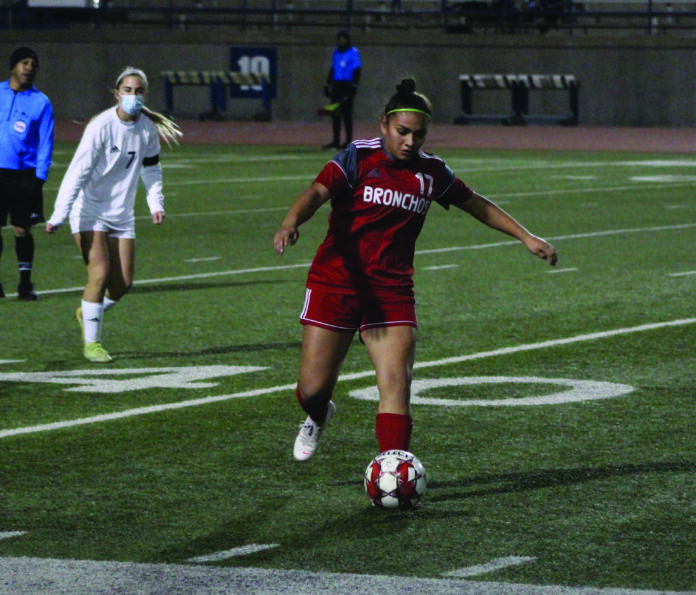 The Midland High girls soccer team bounced back from a two-goal deficit in the second half to earn a 3-3 draw against Odessa High in the District 2-6A opener Tuesday night at Ratliff Stadium.
Riley Sims’ 57th minute equalizing goal ensured that both teams shared the points as the Lady Bulldogs moved to 0-3-2 overall (0-0-1 in district) while the Lady Bronchos fell to 5-1-2, 0-0-1.
“I thought we had a lot of shots on goal and that we did a good job of attacking the whole time,” Midland High coach Jackson Burns said. “We kept battling back and I’m proud of the girls and they kept trying to finish.”
Odessa High took a 1-0 lead on a goal by Cassie Ramirez in the 13th minute.
Just three minutes later Ramirez found the back of the net for her second goal of the night and the hosts had a 2-0 lead.
The Lady Bulldogs cut the deficit in half when Demmi Anders scores in the 35th minute.
Midland High continued to press in the waning minutes of the first half, with a shot by Kinsey Hill scooped up by Odessa High goalkeeper Bayleah Garcia to keep the Lady Bronchos in front at the break.
Ramirez gave the Lady Bronchos their second two-goal lead of the night with her third goal of the contest in the 44th minute.
Midland High answered back with Anders’ second marker of the game, in the 54th minute, to make it a one-goal game.
Sims tied it up three minutes later and Odessa High held off several late chances after that to escape with the tie.
“We know every game in our district is going to be a full on fight for 80 minutes and that’s what we had tonight,” Odessa High coach Cecilia Kellar said. “I thought Midland High came out in the second half with a completely different drive and I thought we didn’t match that energy in the second half.”