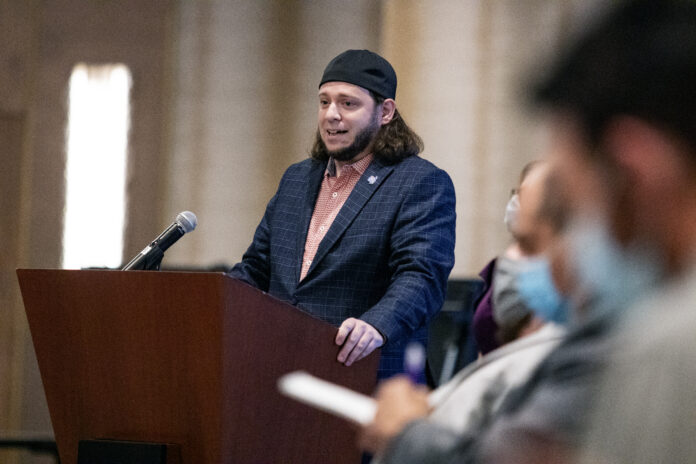 New Odessa Mayor Javier Joven’s first city council work session meeting got off to a rocky start Tuesday, with some council members calling him out for “wasting time” and trying to promote his “personal agenda” over more pressing issues facing the city.
Joven tried to persuade council to pass a city ordinance that would declare Odessa as a “Sanctuary City for the Unborn,” a step that he said would ban abortions in Odessa.
“This is not a city issue; we have other priorities,” councilwoman Mari Willis told Joven during council’s Tuesday work session, which was held at the Marriott Hotel. “We have infrastructure problems and a waste water problem that needs to be addressed.
“Voters elected us to represent them, not so that we could push our personal agendas.”
Councilman Steve Thompson called Tuesday’s two-hour discussion about abortion a “waste of time.” He said passing such an ordinance would divert city staff time from more pressing issues.
“The Mayor’s (election) campaign was about the city wasting money,” Thompson said. “I think this is a waste of time and money.”
Council members Tom Sprawls and Detra White echoed similar sentiments.
Joven invited several people, including Mark Lee Dickson, the founder of the “Sanctuary for the Unborn” movement to try and convince council to pass the ordinance during Tuesday’s scheduled work sessions. Work sessions are not for council members to vote and take action on items but rather a time when council can ask questions and learn more about topics coming for a vote during regular meetings.
Mike Cummings, a city councilman from Jaoquin, Texas, told Odessa council that he was proud that his city passed the ordinance.
But Cummings raised the ire of some Odessa city council members when he suggested that any council member that didn’t support the ordinance was not a true “Christian.”
“If you claim to be a Christian you must act like it or leave God’s name out of it,” Cummings told the council.
Councilwoman White quickly rebuked Cummings: “Don’t accuse me of not being a Christian just because I won’t vote the way you want. You’re not even a resident. You’re some guy from a small town in Texas coming here and telling me that you’re going to judge me? I’m offended.”
Councilman Thompson also took a shot at Cummings who was at times condescending and snarky in his comments to council.
“It’s typical that the people who quote scripture are the ones who don’t follow it,” Thompson said, referring to Cummings.
After realizing he didn’t have enough council support to pass the abortion ordinance, Joven announced that he was abandoning his effort, for now.
Joven suggested he would return to the issue at a later date and said the issue warrants “further discussion county-wide.”
“This isn’t any personal agenda,” Joven said. “The people of Odessa asked me to do this. This is not a waste of time and money.
“I will not ever apologize for standing up for God or my personal opinion.”
Tuesday’s marathon meeting lasted six hours, with half of that time spent debating the proposed abortion ordinance and whether to rescind the city’s current face-covering mandate. More than 100 people attended the meeting, many of them clearly Joven supporters who applauded when he spoke.
A majority of council members said they would not support the city’s current ordinance requiring employees and residents to wear face coverings when inside a business. A majority of the council members were not wearing masks during the session. Willis and White wore masks during the entire meeting.
Former Mayor David Turner and his council passed that ordinance in November after COVID-19 rates had soared to record levels in the county.
But Joven, and council members Denise Swanner, Mark Matta and Tom Sprawls said they thought COVID rates had decreased sufficiently to justify rescinding the ordinance. During a Tuesday Zoom press meeting local health officials said an open dialogue was needed between the city and health officials before the ordinance is rescinded.
Ector County Health Authority Dr. Babatunde Jinadu said that masks and social distancing have helped Odessa’s COVID and flu cases.
However, if hospitalizations go back on the rise, the matter is out of local control and back in state hands in terms of closures of business. Currently, statewide businesses must have occupancy of 75 percent or less.
Council members Willis, Thompson and White argued that face coverings have been effective in reducing rates and should be maintained.
Joven said council will not vote on the face covering ordinance during next Tuesday’s council meeting, but it will be brought back at a future date for a vote.
“At some point we need to get back to normal,” Sprawls said. “I think we’re at a point where we can lighten up.”
Joven said he would like to see the ordinance lifted because too many businesses are suffering from the current COVID restrictions.