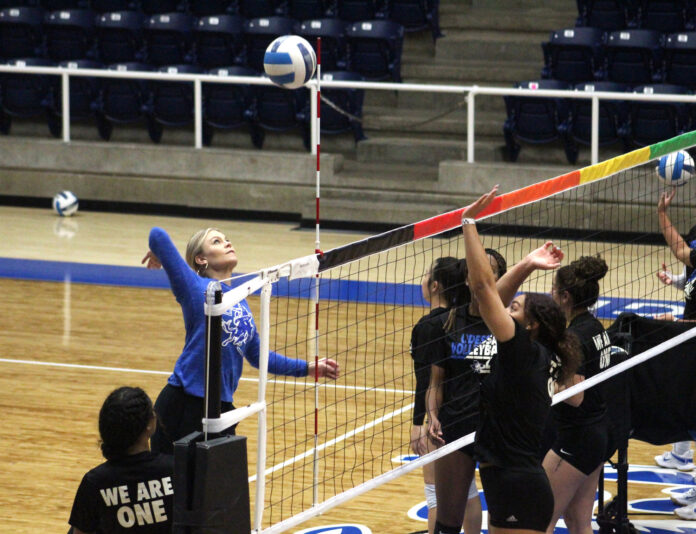 It’s been more than a year since the Odessa College volleyball team has been on the court to compete.

The wait is just about over.

The Lady Wranglers return to play Friday for the first time in 427 days and head coach Kristi Gray said that her team is ready to go.

“It’s been a long few months and you get to a point where you’re tired of playing each other every single day,” Gray said. “You’re ready to see some other competition.”

Odessa College’s first test against other competition begins in the NMMI Classic at the OC Sports Center.

The Lady Wranglers will play four matches in two days, beginning with Missouri State-West Plains at 1 p.m. and Navarro College at 7 p.m.

The tournament was moved off of New Mexico Military Institute’s campus in Roswell due to New Mexico state laws not allowing in-state competition due to the pandemic.

Expectations are high for the Lady Wranglers after completing the best season in school history in 2019.

Odessa College finished 33-3, earned WJCAC and Region 5 titles and earned the program’s first-ever berth at the NJCAA Division I Tournament in Hutchinson, Kan.

The Lady Wranglers begin the delayed season as the No. 5 team in the NJCAA Division I preseason volleyball poll.

Gray says that the team will lean on the strengths that helped the Wranglers make that deep run last season.

“I think our biggest strengths right now are our connection on the court and our defense,” Gray said. “We have a great defense that I’m very excited about. I think it’s stronger than what he had last year and that’s saying a lot.”

What also helps Odessa College is who is returning this season.

Having that experience is something that Gray will lean on, especially with new players coming in.

“I think we have good leadership from our kids that have returned,” Gray said. “The girls have stepped in and made them feel like that they’re at home and their connections have been really good both on and off the court.”

Those connections translate to plenty of energy on the bench, something that Gray encourages from her team and hope that it continues with this group.

“I’m very big on communication and energy, Gray said. “It’s something that I preach from the jump every single day so they know that it’s expected from me.

“It comes natural for them because they’ve done it their whole lives and it works great because they are very loud and very involved.”

Gray looks forward to getting back on the court with her team. She said that given the uncertainty that the schedule may provide, it’s just all about making the most of the opportunity to play.

“One thing that we always talk about is control the controllables,” she said. “Our focus is just one day at a time and one match at a time and that’s how we’re taking this season on.”