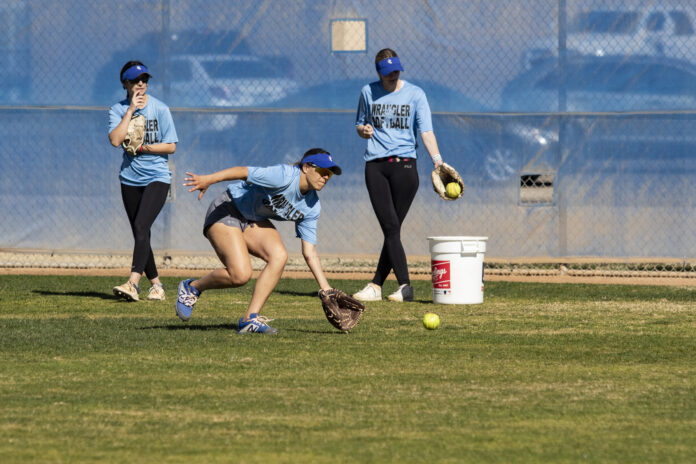 The situation isn’t nearly so bleak, according to Lady Wranglers coach Jeff Jackson.

Most of the redshirt freshmen actually saw action during the abbreviated 2020 season, which saw Odessa College post a 12-7 record before the rest of the year was canceled because of the COVID-19 outbreak.

”Basically, everybody other than Illy is going to start as a freshman this year and whatever they are this year, they stay next year.”

That gives the Lady Wranglers, who open the 2021 season at 1 p.m. Friday with a doubleheader against Ranger College at Wrangler Field, a solid core around which to build. Cisneros said the team has a good mix of experienced players and newcomers.

“We do have more coming back than just me and I think it helps a lot with the incoming girls,” Cisneros said. “Different people can help the freshmen, especially from different positions.

“They have at least two or three in the infield and the outfield. It helps them to help the younger ones coming in and I think we’ve done a really good job with that.”

“You kind of have two levels of experience where you’ve got our third-year player with Illy,” he said. “You can ask anybody in baseball and softball where having those juniors and seniors is a huge difference.

“Having somebody going into her third year is really a tremendous advantage for her, specifically, but also her leadership for the team and her ability having already done it a couple of times and lead by example.”

While Cisneros realizes she won’t carry the full burden of team leadership, she realizes she has her role to fulfill.

“I don’t think they’ll put that on me, but I think they will have an expectation for me to do it to a certain extent,” she said. “I’ve never been an all-out-there-type leader.

“It’s basically, if someone’s having trouble, you don’t have to say something to them in front of everybody. Just take them to the side and give them a little bit of help or whatever they need to do better at some things.

“The real loud and outgoing leader is not a role I think I could fill, but more a low-key kind of leader, I think, is where I fit.”

Jackson said most of the lineup, starting with a deep pitching staff, is in place

The infield has Permian graduate Hunter Harkrider at first base, Odessa High grad Alyssa Deanda at second, Madi Scott at shortstop and a platoon of Marijn Crouwel and Reagan Hillis at third. The outfield boasts Lauren Gonzales in left, Odessa High grad Kaylean Ayala in center and Alyssa Gillen in right.

“I’m really excited about our infield,” Jackson said. “I think they’ve got some extreme playmaking ability.”

The one unsettled spot is catcher, where Crouwel could share time with a trio of incoming freshmen.

“I’m still waiting to see somebody not just control the pitching staff but control the defense and use it well and also be able to hit their way into the lineup,” Jackson said. “I think behind the plate is going to be key for us, especially with as good a pitching staff as we’re going to have. I need somebody who can make every borderline pitch look like a strike.”

“It’ll look different, but at the end of the day it’s just another team in the other dugout that we’ve got to go and beat,” Jackson said. “I think that’s the mentality we’ve got to take for the entire year. We’ve got to be flexible.

“The schedule we have online right now will absolutely not be the schedule we finish with. Hopefully, whenever we do find ourselves needing games, somebody else will be in that same boat. We’ll just try to make it up on the fly as we go. Whatever’s available, we just want to play.”