Whatever Clifford Gordon set his mind on, teachers and coaches knew that he was going to be fully committed to it.

That hard work helped him stand out as he finished ninth in the 799-person Class of 2021 at Odessa High School.

Gordon competed on the football field and for the Bronchos track team but he credits his family for helping him get on the right track in terms of academics.

He also spent time volunteering at the library as well at Greater Saint Luke Baptist Church in Odessa.

“We’ve always been very dedicated to our education,” Gordon said. “It’s just about staying committed to doing my work and putting that above everything else that I was doing at the time.”

He also credited head track coach Ryan Jackson for implementing another lesson that he carried with him throughout high school.

“Being a great student was a part of his way of teaching us about being a great teammate,” he said. “It was about being able to go to practice and then also going to all of our classes and making sure that we’re getting our work done and learning all that we need to in order to be successful.”

When it came time to perform on the track, Jackson said that Gordon was always a kid that gave maximum effort.

Gordon had started off running mostly sprints before competing in the relays during the closing stretch of the season.

No matter which event Gordon competed in, Jackson said that he was impressed by the dedication he showed and was an example for others to follow.

That was especially true last year once COVID-19 shut down the remainder of the 2020 season.

“When everything happened with COVID this year, he was the one who did stuff on his own,” Jackson said. “He worked hard and made himself faster.

Jackson added that the confidence Gordon built allowed him to step out of his shell this past year.

He said that he’s come a long way as a competitor and as a person.

“Cliff is such an awesome young man,” Jackson said. “He’s a great student and I never had to worry about him in the classroom, being on time or showing up to practice.

“He’s the kind of kid that you wish everyone had on their team.

“He’s a very intellectual kid and he’s going to be great at whatever he decides to do.”

Gordon said he’s been able to build confidence from the support system that he’s had throughout his life.

That includes his two older sisters and his parents along with his teachers and coaches who have helped him through every step of the process so far in his life.

His hard work has not gone unrecognized as he’s earned academic all-state honors for both football and track.

“I’ve just had a great support system here at Odessa High,” he said. “I haven’t had anybody tell me I couldn’t do something.

“It was always about how good I was doing and also what else I could be doing.”

His family also had a lot of influence on his next chapter in his life.

Gordon, who was born in Lubbock, plans to attend Texas Tech to study computer science and business administration with a goal of creating his own computer company.

He said that he’s looking forward to going back home in a sense and is excited to see what the future has in store for him.

“I’ve just always been interested in how computers work and what you can do with them,” Gordon said. “I’ve always wanted to have my own business and I’ve been thinking it was just a good way to do it together.” 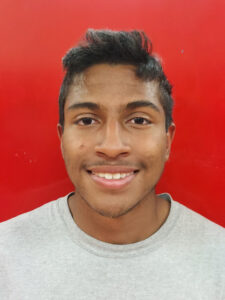 >> Activities: Helping in church; Volunteering at the library; Watching movies

>> Goals for the future: Create my own computer company