Persistent is a word that can be used to describe Alpine’s Kylie Penders.

Whether it has been schoolwork or competing to be the best runner that she can be, it’s safe to say that Penders has made the most of her time at high school.

Most recently, she was able to close out her high school track career with her first appearance at the UIL State Track and Field Championships in Austin.

Penders qualified in the Class 3A 100-meter hurdles where she finished eighth. Making it to state was something that she looks back on with her pride as her favorite athletic moment.

“I was very honored to be there. I knew it was possible to get there with a lot of hard work to put in,” Penders said. “It’s definitely a great way to end my senior year.”

That achievement capped off a strong career for Penders who wanted to make sure that she could devote as much time as she could to everything else she had going on.

Aside from running track and cross country, she was also heavily involved in her community volunteering whether it was helping with events at her school or trail work out at the parks in Alpine among many other acts of service.

She’s also done plenty of work with the local Future Farmers of America chapter where she was an area qualifier three times. That stemmed from a love for animals that she’s had growing up and there have been a lot of other benefits as well.

“I grew up on a ranch so animals have always been something I’ve been really interested in,” she said. “It made me a lot better at public speaking and meeting new people. I was really shy when I started high school but it made me really get out there and talk.”

One coach who has seen her growth throughout the years is head cross country coach Cory Cason.

Cason was also Penders’ world history teacher her sophomore year and said that her determination and focus when things get tough make her stand out even when she had a full slate of things to take care of.

“She’s always been on top of her work and very conscientious of it,” Cason said. “It didn’t always come easy for her. She’s a really good student because she works at it.”

As for her accomplishments on the track, Cason added that it carried over there as well.

“I could tell she was very determined to try and get to state,” she added. “She stuck with it and did not deter her from reaching that goal.”

Those lessons of hard work and determination came from her grandfather, Yari. Her grandparents adopted and home-schooled Kylie until the sixth grade and she gives both of them credit for having a strong impact on her life and teaching her everything she knows.

“He’s my biggest influence and I look up to him so much,” she said of her grandfather.

Her hard work is paying off in the classroom as she has earned 12 hours through dual credit classes while also maintaining a 4.0 GPA. Her plan is to attend Texas Christian University in Fort Worth to study biology and start on a pre-vet track.

After that, her goal is to start her own veterinary practice with returning to Alpine being a strong possibility.

She does plan to keep herself in shape running but is also looking forward to the next chapter.

“TCU is a really good fit for me,” Penders said. “The biology program is really good and the campus is beautiful.” 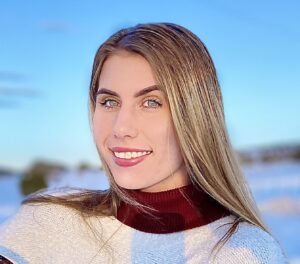 >> Goals for the future: To start my own veterinary practice specializing in small animal, avian and exotic.

>> Favorite book: Gone with the Wind by Margaret Mitchell

>> Role model: My grandfather, Yari, who showed me what hard work looks like and that nothing comes easy. He homeschooled me Pre-K through sixth grade