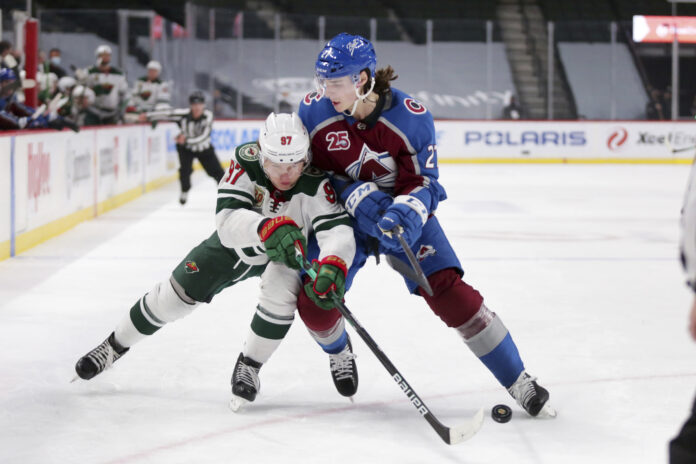 ST. PAUL, Minn. (AP) — Brandon Saad had a goal and assist to lead a balanced scoring attack and the Colorado Avalanche beat the Minnesota Wild 5-1 on Saturday night.
Logan O’Connor, Joonas Donskoi, Mikko Rantanen and J.T. Compher also scored for Colorado, which has won three straight and four of five to take the West Division lead. Ten players had points, including two assists each for Samuel Girard, Andre Burakovsky and Nathan MacKinnon.
Philipp Grubauer made 19 saves for his NHL-best sixth win.
“It just seems like we’re getting opportunities, guys are finding the back of the net, a little bit of confidence comes back," coach Jared Bednar said. "I think we’re getting better production and better games out of our second, third and fourth line.”
Matt Dumba scored and Kaapo Kahkonen stopped 28 shots for Minnesota.
“They’re the class of the league,” Minnesota’s Zach Parise said. “They play a good style of hockey — they’re fast. The top line is arguably one of the best in the league, so it was a different type of game than we had played in the first eight.”
In the first of four straight games between the teams, Saad scored on a one-timer in the third period for a 4-1 lead, his third straight multipoint game, and Compher later added his first of the year.
Traded by Chicago to Colorado on Oct. 10, Saad had one goal and no assists in his first six games.
“It’s a short training camp to get into a quick season, new systems, new team, so you try to mesh and jell as quickly as you can,” he said. “The points are nice, and they make you feel good, but it’s really game by game.”
Rantanen gave Colorado a 3-1 lead early in the second period with his seventh of the season, weaving around two defenders, cutting across the slot and scoring from the left dot. He is the first player in Avalanche/Nordiques history to score in the team’s first five road games.
Rantanen, who entered tied with four others for the league lead in goals, has scored in seven of the past eight outings.
The teams traded fluky goals early.
In his first shift of the season, O’Connor’s long shot deflected off Kahkonen’s stick laying in the crease at 3:02. Dumba answered less than 4 minutes later with a rising wrist shot that went off the mask of Grubauer.
“It definitely doesn’t happen often, but it was nice after some extended time off to have a good O-zone shift there to start and get that goal there,” O’Connor said.
Donskoi scored on the power-play with 15.7 seconds left in the frame.
Colorado was 2 of 7 on the power play and is clicking at 31.1% this season. Its penalty kill was 2 for 2 and has killed off 19 straight shorthanded situations. The Wild are 2 for 36 on the power play this season.
NO FIALA
Wild LW Kevin Fiala served the first game of his three-game suspension for a boarding penalty and game misconduct in Thursday’s win over Los Angeles. Fiala scored three goals in his past four games.
Minnesota dressed 11 forwards. Brad Hunt slotted into the lineup as a seventh defenseman.
IN AND OUT
Colorado D Erik Johnson left in the first period after getting crushed into the boards by Jordan Greenway. Wild C Marcus Johansson and Dumba left with apparent injuries. Neither coach had an update. … Avalanche C Pierre-Edouard Bellemare and D Devon Toews missed their first games with lower-body injuries. Bednar had no timetable for either’s return. O’Connor replaced Bellemare on the fourth line. D Conor Timmins took Toews’ spot. … Wild G Cam Talbot backed up Kahkonen after missing the past three games with a lower-body injury.
A HEAP OF HELPERS
Colorado D Cale Makar recorded his 10th assist in his ninth game. Only John-Michael Liles reached the marker quicker in franchise history, needing eight games in 2010-11.
HONORING THE PAST
The Wild plans to wear their retro sweaters, featuring Minnesota North Stars colors, for the first time Sunday.
“For all of us North Star fans here in Minnesota, you feel like it’s been a long time coming that we add a little bit of that into the jerseys and into the team,” said Parise, whose father J.P. played nine seasons for the state’s former NHL team.
UP NEXT
The teams close out a two-game series in Minnesota on Sunday before playing two in Denver.
———
More AP NHL: https://apnews.com/NHL and https://twitter.com/AP—Sports