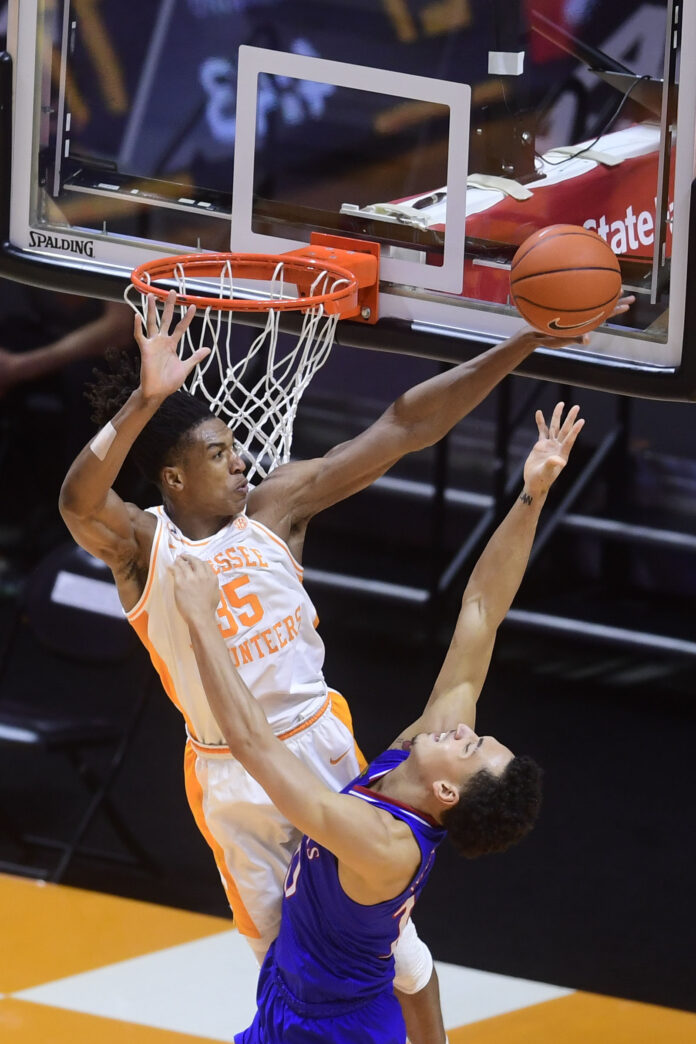 KNOXVILLE, Tenn. (AP) — Seniors Yves Pons and John Fulkerson wanted some payback after losing to Kansas each of the past two seasons.
Pons scored 17 points with Fulkerson adding 11 as No. 18 Tennessee never trailed Saturday in beating the 15th-ranked Jayhawks 80-61 in the Big 12/SEC Challenge.
“I was really excited about playing them because I wanted to get my revenge, and that’s what we did tonight," Pons said.
The Volunteers (12-3) won their second straight and notched their second win against a top-15 opponent this season, a much-needed boost to their resume after COVID-19 issues scratched No. 1 Gonzaga, No. 14 Wisconsin and also a trip to Notre Dame.
This was just Tennessee’s second win all-time against Kansas in six games. The Vols now are 5-2 in the Big 12/SEC Challenge, which the SEC won this season 5-4 for only the second time.
Jaden Springer scored 13 for Tennessee, whose only losses have been without the freshman this season. Victor Bailey Jr. had 11 apiece, and Josiah-Jordan James had nine points and 11 rebounds. Pons, the reigning SEC defensive player of the year, was 7 of 9 and knocked down a pair of 3s after scoring 24 in a loss at Kansas last season.
“He was just phenomenal tonight,” James said.
Kansas (11-6) has lost four of five, the first time the Jayhawks have done that in a five-game span since Roy Williams’ first season as head coach in 1988-89. Kansas is 4-4 against ranked opponents this season and 5-3 all-time in the Big 12/SEC Challenge.
“We were bad and Tennessee was great," Kansas coach Bill Self said. "I don’t think we did anything to make them play poorly. And I think they did a lot of things to make us play poorly.”
David McCormack led the Jayhawks with 17 points, Marcus Garrett added 15 and Jalen Wilson had 10.
Keon Johnson opened the scoring with a jumper and Santiago Vescovi added a 3 as Tennessee grabbed the lead from the start. Kansas missed its first three shots and had a shot clock violation before McCormack hit a short jumper with 16:51 left for the Jayhawks’ first points.
McCormack scored six of Kansas’ first eight points, pulling them within 9-8 with 14:47 left. That was as close as the Jayhawks would get.
The Vols led by as much as 16 in the first half inside the final minute before Tyon Grant-Foster’s layup pulled Kansas within 40-26 at halftime.
The Jayhawks tried to make a run to start the second half with Ochai Abgaji scoring back-to-back buckets to pull them within 47-35. Tennessee scored the next nine points and led as 26 down the stretch.
BIG PICTURE
Kansas: This won’t help the Jayhawks burnish their own resume for postseason play, and there’s still a trip to Texas, which beat them by 25 on Jan. 2, and another game against No. 2 Baylor left in conference play. … The Jayhawks have to work on their shooting. They wound up going 6 of 24 outside the arc and just 15 of 22 at the free throw line.
Tennessee: The Vols have proven they can play stingy defense, and they dominated on the boards 38-23, scoring 14 second-chance points. This game showed why they were picked to win the SEC title this season by putting together an impressive offensive performance. They shot 52.8% (28 of 53) and 8 of 13 from 3 (61.5%) and 16 of 17 at the line.
“The key is honestly you’ve got to take open shots when they’re there," Tennessee coach Rick Barnes said. “If we do that, it takes care of a lot of things.”
BRAGGING RIGHTS
Barnes now has 721 career victories. He came into this game as the seventh-winningest active coach in Division I, just ahead of Self with 719. Barnes also notched his eighth head-to-head win over Self, most of any coach. Tom Izzo of Michigan State has seven wins over Self.
QUICK TURNAROUND
The Jayhawks played Thursday night, beating TCU, then had to travel while Tennessee last played Tuesday night. Self said the Vols were rested and had Kansas well-scouted. “The quick turnaround didn’t help us, and it’s not the reason why we got beat,” Self said. “But it didn’t help us.”
UP NEXT
Kansas hosts Kansas State on Tuesday night.
Tennessee visits Ole Miss on Tuesday night.
——
Follow Teresa M. Walker at https://twitter.com/TeresaMWalker
———
More AP college basketball: https://apnews.com/hub/college-basketball and https://twitter.com/AP—Top25