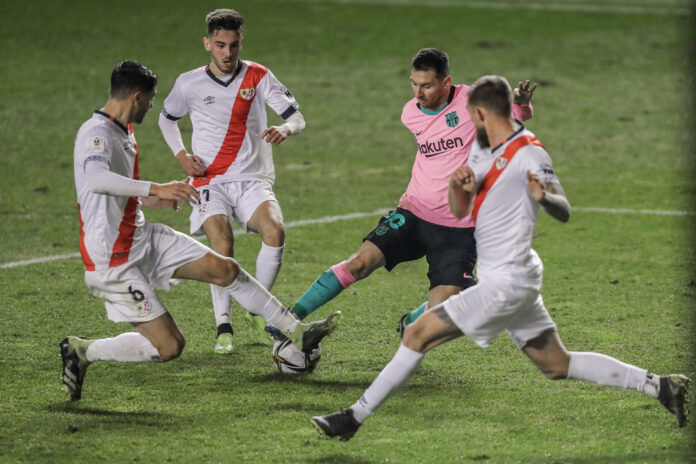 MADRID (AP) — Lionel Messi returned from suspension to help Barcelona avoid an upset in the Copa del Rey on Wednesday, scoring a goal and setting up another in a 2-1 come-from-behind win over second-division club Rayo Vallecano in the round of 16.
Messi, coming off a two-game suspension for hitting an opponent during the Spanish Super Cup final, scored an equalizer in the 69th minute and led the buildup to Frenkie de Jong’s 80th-minute winner that put Barcelona into the last eight of the Copa for an 11th straight season.
De Jong also helped set up Messi’s goal with a perfect through ball to Antoine Griezmann, who crossed for the Argentine playmaker to score his 18th goal in 11 matches against Rayo.
Fran García had put the hosts ahead on a breakaway in the 63rd.
Barcelona needed extra time to advance past third-division club Cornellá in the round of 32. It also played extra time in both Spanish Super Cup matches this year — a win against Real Sociedad in the semifinals and a loss to Athletic Bilbao in the final.
Messi was sent off in that final against Athletic on Jan. 17. He missed the game against Cornellà and against Elche in the Spanish league. Barcelona won both matches 2-0.
“It’s been a very tough month, with several away matches, but the team showed a good mentality and deserved these victories,” Barcelona coach Ronald Koeman said. “We have improving in several areas recently.”
It was the first time Messi played in a Copa match this season. He had been rested in previous games.
The last time Barcelona failed to reach the last eight in the Copa was in the 2009-10 season, when it was eliminated by Sevilla in the round of 16.
With a team mixing regular starters and reserves, Barcelona was in control from the start at the Vallecas Stadium in Madrid. The Catalan club was denied by the woodwork three times, twice in the first half with De Jong and Riqui Puig, and once in the second with a free kick taken by Messi.
De Jong had a goal disallowed by offside in the 65th.
Rayo was coming off a loss to Mallorca but previously had won six in a row in all competitions. It sits fourth in the second-division standings, in good position to earn promotion.
Barcelona trails Spanish league leader Atlético Madrid by 10 points and is three points behind second-place Real Madrid entering the second half of the season.
Barcelona’s American defender Sergiño Dest did not play on Wednesday because of a thigh problem.
Real Madrid and Atlético Madrid were eliminated before the last 16.
SEVILLA CRUISES
Luuk de Jong scored two first-half goals as Sevilla cruised to a 3-0 win over Valencia, reaching the quarterfinals for the second time in three seasons.
Ivan Rakitic also scored in the first half for Sevilla, which also made it to the last eight in 2019. The five-time Copa champion will be trying to reach the semifinals for the first time since 2013.
Valencia won its eighth Copa title in 2019 and reached the quarterfinals last season, before losing to Granada.
De Jong scored in the 20th and 33rd minutes at the Ramón Sánchez-Pizjuán Stadium, and Rakitic added the third in the 38th with a neat lob over Valencia goalkeeper Jaume Doménech from inside the area.
Every Sevilla player touched the ball in the buildup of the second goal by De Jong.
The bad news for Sevilla was that captain Jesús Navas had to be replaced because of an apparent muscle injury in the 65th.
Sevilla sits fourth in the Spanish league standings.
Valencia, not far from the relegation zone in the league, played without some of its regular starters.
———
More AP soccer: https://apnews.com/Soccer and https://twitter.com/AP—Sports