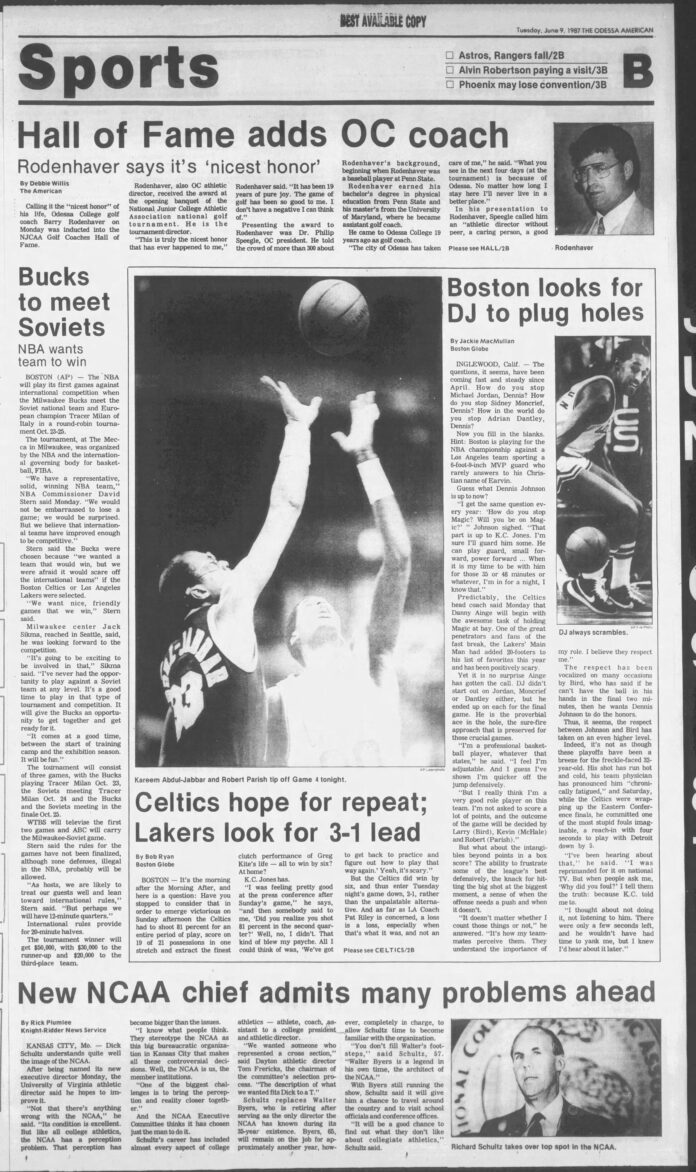 >> 1948: Five Odessa Country Club golfers were expected to enter the West Texas Men’s tournament in Abilene: Bill Roden, Bob French, Bobby Davidson, Bill Breeden and Cecil Taylor. Roden was considered one of the top favorites in the tournament after winning the Odessa Invitational the week before. Billy Maxwell, Gervis McGraw, Dilmus James, Dan Winters and Doug Jones would play on their home course.

>> 1987: Odessa College golf coach Barry Rodenhaver was inducted into the NJCAA Golf Coaches Hall of Fame. The school’s president, Dr. Philip Speegle, presented Rodenhaver with the honor at the opening banquet of the NJCAA national golf tournament. Up to that point, the head coach turned out 25 All-Americans and led the Wranglers to 12 Western Junior College Athletic Conference championships. … The Los Angeles Lakers looked to take a 3-1 series lead over the Boston Celtics in the NBA Finals. Boston won the third game of the series to cut the series deficit to 2-1, but needed to shoot 81% from the floor during the in the second quarter of that contest to stifle a team that featured Magic Johnson and Kareem Abdul-Jabbar.

>> 2006: The Midland High baseball team was set to face off against The Woodlands in the Class 5A state tournament in Round Rock. The Bulldogs went into the contest with a 32-9 overall record, while The Woodlands came in at 36-1. A title game would take place at Dell Diamond against the winner of the Corpus Christi Moody and Katy matchup. Midland High head coach Barry Russell planned to start right-hander Brandon Fierro on the mound, while The Woodlands looked to avoid starting Kyle Drabek, who was the 18th overall pick in the MLB Draft.