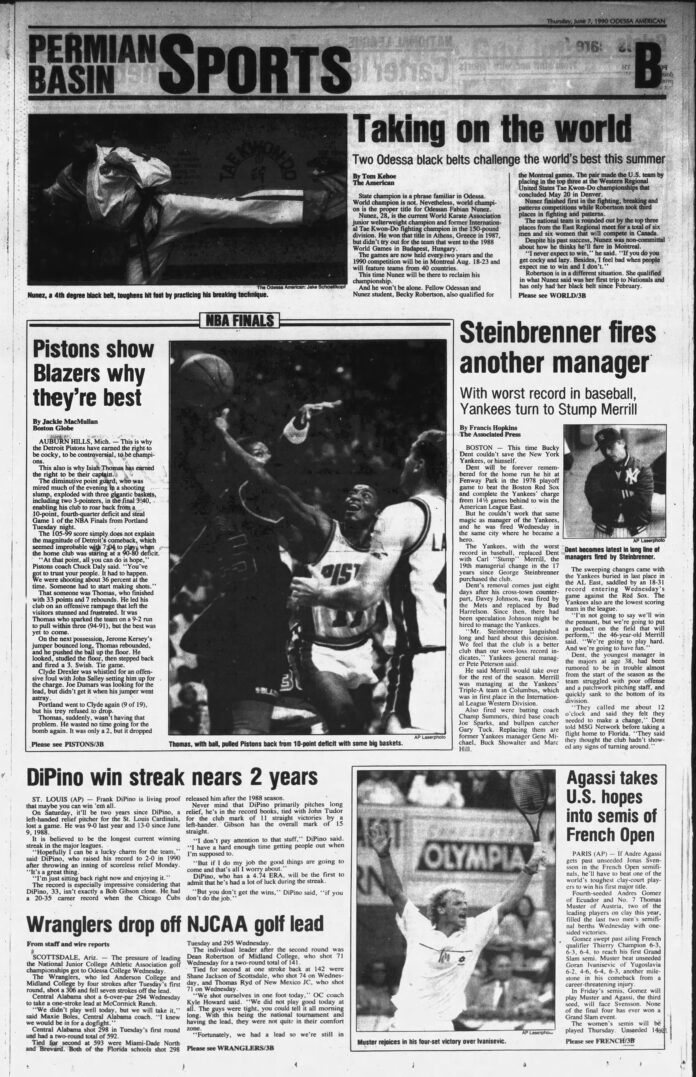 EDITOR’S NOTE: The Odessa American will feature some historical highlights for those of you having sports withdrawal during the summer. Happy reading!

>> 1968: The Odessa College golf team found itself in fourth place at the NJCAA tournament after shooting a 304 in the third round of the competition in Roswell, New Mexico. … The Lamesa baseball team was set to play El Campo in the Class 3A state title game after upsetting defending state champion South San Antonio by a 2-1 score. … The Houston Astros were shut out 4-0 after a solid day on the mound for St. Louis Cardinals pitcher Bob Gibson.

>> 1976: The Pecos baseball team was set to go up against defending state champion Brenham in the Class 3A state semifinals in Austin. The game would take place at Disch-Falk Field at the University of Texas campus. It was the third time in four years Pecos earned a spot in the state tournament. … The Boston Celtics secured their 13th NBA title after defeating the Phoenix Suns 87-80. … The Odessa Dorados won a doubleheader against the Odessa Stars at Martin Field. … Albert Hernandez was the winning pitcher for the Dorados in the first game, while Bibian Nabarette won the second game on the mound.

>> 1990: Odessans Fabian Nunez and Becky Robertson were preparing to compete at the 1990 World Games in Montreal, Canada. Both made the U.S. team after placing in the top three at the Western Regional United States Tae Kwon-Do championships. … The Detroit Pistons took a 1-0 lead in their NBA Finals series against the Portland Trail Blazers. Point guard Isiah Thomas made a big impact late for Detroit, scoring two late 3-pointers to cut a 10-point deficit and secure a 105-99 win for his team. … Bucky Dent was fired as New York Yankees manager after leading the team to the worst record in the league.

>> 2000: Chad Campbell of Andrews qualified for the 100th U.S. Open at Pebble Beach Golf Links. … He advanced after hitting 144 over two days at Settindown Creek Golf Club, giving him one of the top five scores in the qualifying event. … Iraan graduate Brandon Alldredge signed a scholarship to continue his football career at McPherson College in Kansas. Alldredge was a member of the Odessa American’s All-Permian Basin team.