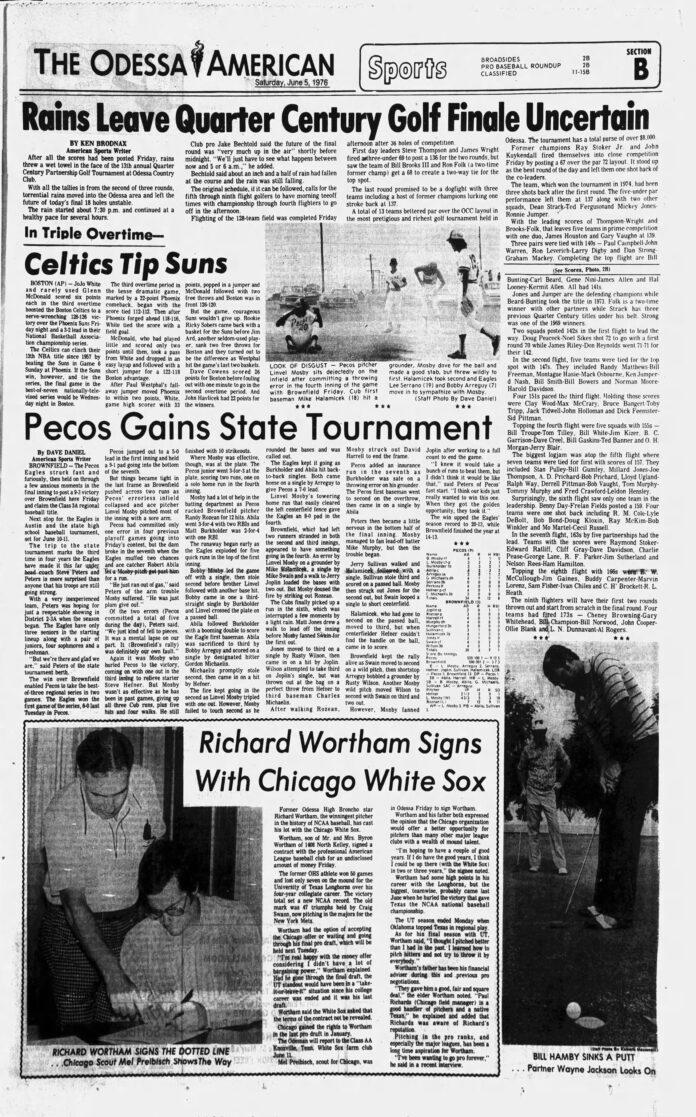 >> 1976: The Pecos baseball team secured a spot in the state baseball tournament after defeating Brownfield 9-3 and claiming a Class 3A regional title. … It was the third time in four years the Eagles had qualified for the state competition. … Head coach Steve Peters was hoping his inexperienced team would have a respectable showing in District 2-3A play before the season started, but it exceeded expectations. … The team consisted of three seniors, two juniors, four sophomores and a freshman.

>> 1985: Former Permian quarterback Rex Lamberti was looking to secure a starting spot on the Abilene Christian football team. … Lamberti was listed as the Wildcats’ No. 1 quarterback through spring training, according to then head coach John Payne. … The head coach described Lamberti as a talented young man who would have to learn a combination of offenses to lock down his spot. … In 1983, Lamberti completed 79 of 125 passes for the Panthers, receiving Class 5A first team all-state honors.

>> 1997: Odessa High’s Derric Workman signed a letter of intent to continue his basketball career at Odessa College. … Named District 4-5A’s Most Valuable Player in 1996, Workman thought about playing for the Wranglers for a long time. … When he learned he needed to go the junior college route, Odessa College seemed like the natural choice. … Wrangler head coach Orlando Ontiveroz said Workman was fearless and didn’t care who he was playing against.

>> 2011: Odessa High’s Bradley Marquez was moving to Lubbock to start summer school and offseason football workouts at Texas Tech. … He signed on to play football for the Red Raiders and had an agreement to play baseball at the school, but was also keeping a close eye on MLB’s First-Year Player Draft. … Marquez went to four showcases and told teams about his future plans and kept an open mind when it came to playing in the minors. … At the time, Russell Wilson was playing minor league baseball while looking for a new college to play quarterback for after transferring from North Carolina State.