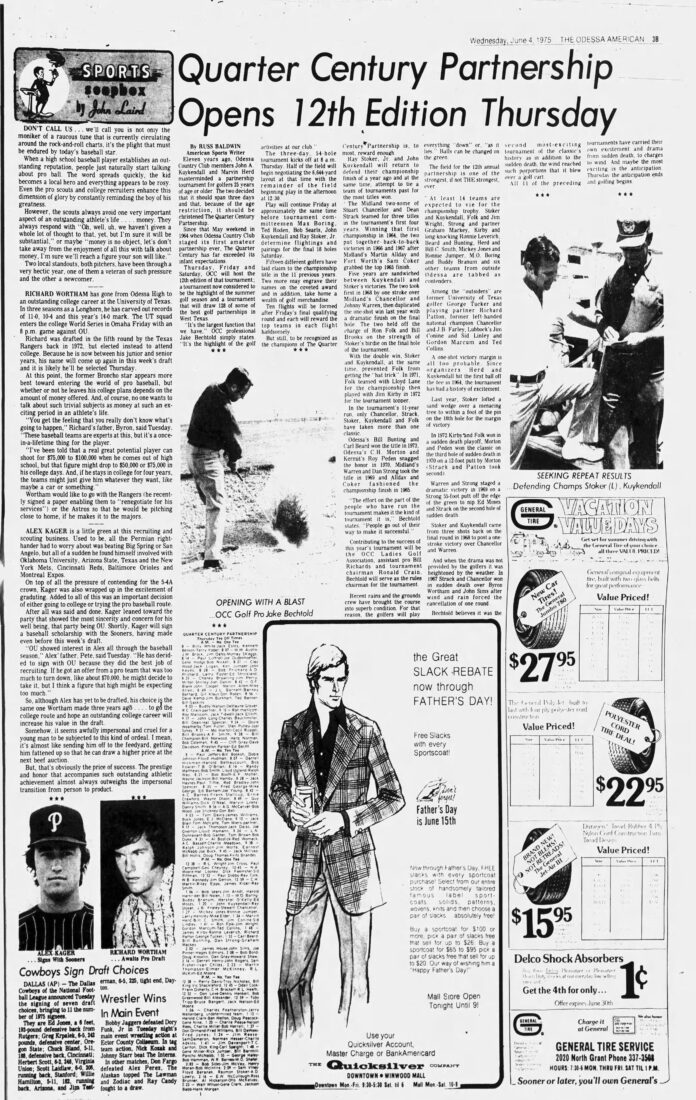 >> 1951: The Odessa High baseball team was preparing to begin its title defense at the state tournament against Tyler in Austin. There was a great concern that the tournament would be delayed to storms in the forecast. … The Odessa Oilers were also aiming to complete a two-game sweep of the Midland Indians after the Oilers won 10-1 the day before. Starting pitcher Ovelio Ortega led the way by allowing just one run and three hits in a complete-game effort.

>> 1975: The Odessa College men’s tennis team got off to a strong start in the National Junior College Tennis Tournament in Ocala, Fla. The Wranglers earned 12 points to tie with Miami Dade North after winning five singles matches and a pair of doubles matches. … The 12th annual Quarter Century Partnership was set to tee off the following day at Odessa Country Club. Ray Stoker Jr. and John Kuykendall entered the three-day tournament as the defending champions. … At 63 years old, Sam Snead became the oldest golfer to qualify for the U.S. Open after finishing with a 36-hole total of 142 during a qualifier in Charlotte, N.C.

>> 1990: The Odessa College golf team was getting set to tee it up at the NJCAA National Championship at McCormick Ranch in Scottsdale, Ariz. … The Midland Angels were looking to rebound after falling 8-4 to the Wichita Wranglers in Texas League play. … Seattle Mariners pitcher Randy Johnson was celebrating throwing a no-hitter against the Detroit Tigers. Johnson became the first pitcher in franchise history to accomplish such a feat.

>> 2011: West Texas Roughnecks quarterback K.J. Black was preparing to make his second start for the team following an injury to previous starter Arkenon Hall. … College football official Mark Windham was getting set to compete at the df Ranch Triathlon the following day in Sweetwater. It was featured as one of the only triathlon that featured an open-water swim. … Midland Lee graduate Brandon Williamson put together a solid start for the Dallas Baptist baseball team in a 3-2 victory in 10 innings over Oklahoma in the Fort Worth Regional. Williamson pitched nine innings and gave up two runs on seven hits to earn the victory.