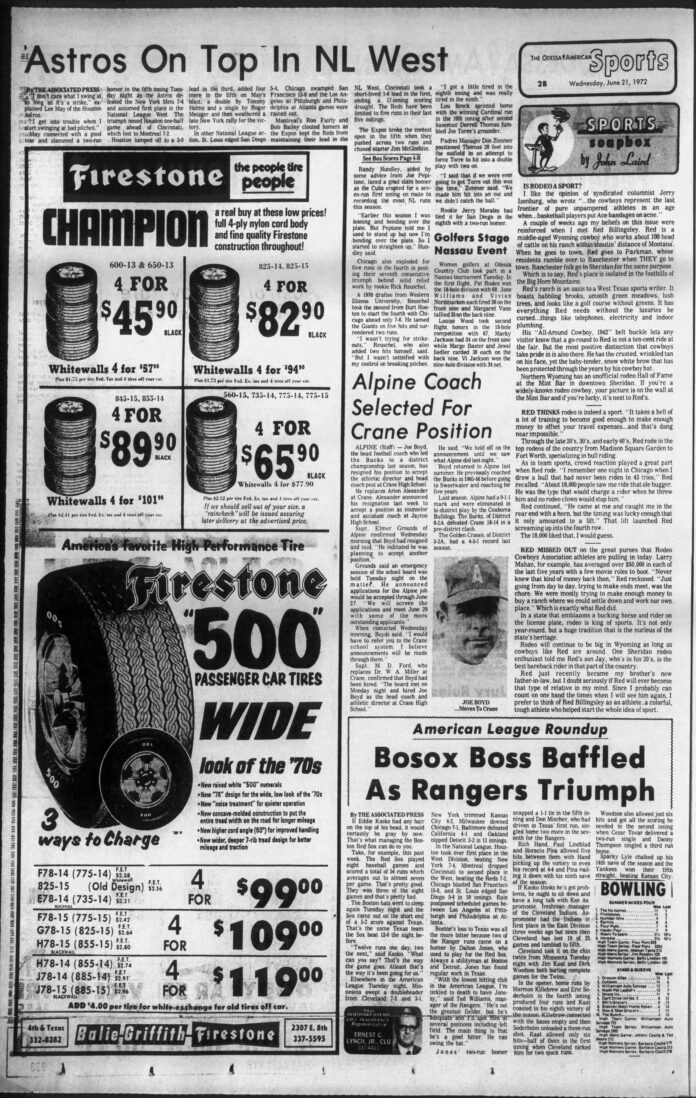 >> 1951: The Civic Baseball association of Odessa raised a little under $20,000, falling just short of its $30,000 goal to save baseball in the city. Donations came in from early pledges and checks being left at the ballpark. Odessa Oiler players Leo Eastham and Bob Martin took some of the money fans donated after hitting consecutive home runs and bought stock in the team.

>> 1972: Alpine head football coach Joe Boyd resigned from his position with the Bucks to take an athletic director and head coaching job in Crane. Alpine ISD planned on screening applications and quickly hiring a replacement. Boyd led the Bucks to a 9-1-1 record the previous season, while Crane went 4-5-1. … Pat Roden won the 18-hole division of a Nassau golf tournament taking place at Odessa Country Club. Her score of 68 helped her secure the top spot, while Louise Wood followed in second with a score of 67.

>> 1996: Shannon Wester was recommended to the ECISD Board of Trustees to become Permian girls gymnastics coach. She worked at a Lubbock hospital before returning to Texas Tech to get a teaching certificate and becoming girls gymnastics coach at Lubbock High. She led that team to the Texas High School State Gymnastics Championships in San Angelo. … Chicago Bulls head coach Phil Jackson signed a one-year deal to stay with the Bulls. At that point, Jackson had led Chicago to four titles in six years. He was named Coach of the Year after picking up 72 victories over the regular season.

>> 2012: Utility player Luke Hughes was being promoted to Triple-A baseball after spending a short period of time with the Midland RockHounds. The Australian almost considered going back home when he learned that the Oakland Athletics were sending him down to the minors after signing him. Instead Hughes came away from his brief stay in Midland with a refreshed attitude for baseball and he got back to enjoying the sport. … The Odessa College rodeo team was competing in the National College Finals Rodeo in Casper, Wyoming. The team qualified for the competition after placing second in the National Intercollegiate Rodeo Association’s Southwest Region.