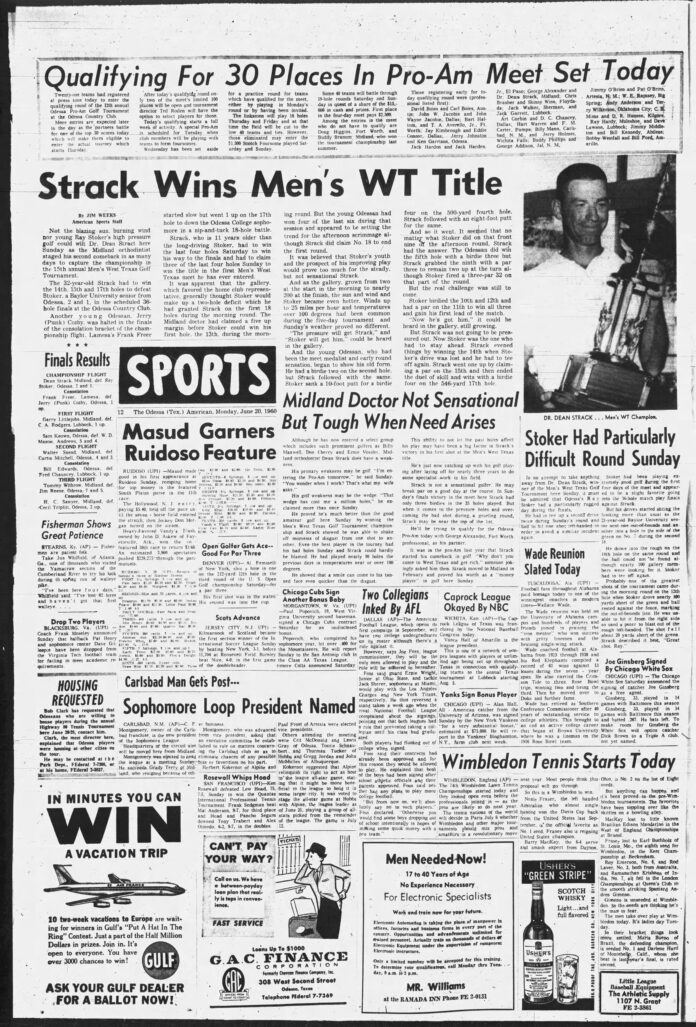 >> 1974: Odessa’s Mamie Bevers won the women’s singles title and teamed up with Nancy Crawford of Andrews to win a double championship at the 16th annual Odessa Highway 80 Tennis Tournament at Permian. Bevers defeated Midland’s Yvonne Garton to claim the singles crown, then paired up with Crawford to defeat Elise Richardson and Hollis Ann Hands of Amarillo in doubles competition. … UTPB’s Nancee Weigel and Jenni Davis advanced to the second round of the women’s NCAA national tennis championships after defeating the University of North Carolina’s Rebecca Garcia and Linda Scott. Odessa College’s Becky Grab and Astrid Daksa didn’t have the same luck in Kalamazoo, Michigan, as they lost to the University of Southern California’s Diane Desfor and Susan Warfield.

>> 1997: The Midland Angels won a 17-14 slugfest against El Paso. The teams combined for 31 runs, 34 hits and six errors throughout the contest in Midland. The game also featured seven lead changes and nine pitchers. … Koy Stribling felt confident after winning the Championship Flight Shootout portion of the Sun Country 1997 City Championship Golf Tournament. He had to survive playoffs twice to play the three-round main event at the par-72 Ratliff Ranch Golf Links course.

>> 2010: The West Texas Roughnecks started playoff preparation after defeating the Corpus Christi Hammerheads 75-32 at Ector County Coliseum. The Roughnecks had a 7-7 record after the win, stringing together four consecutive victories before facing the Amarillo Venom. … Matt Purke and the TCU baseball team defeated Florida State 8-1 in their College World Series opener. The Seminoles managed only four singles and an unearned run in seven innings against the Horned Frogs in Omaha, Nebraska. TCU would go on to face the winner of a CWS matchup between Florida and UCLA.