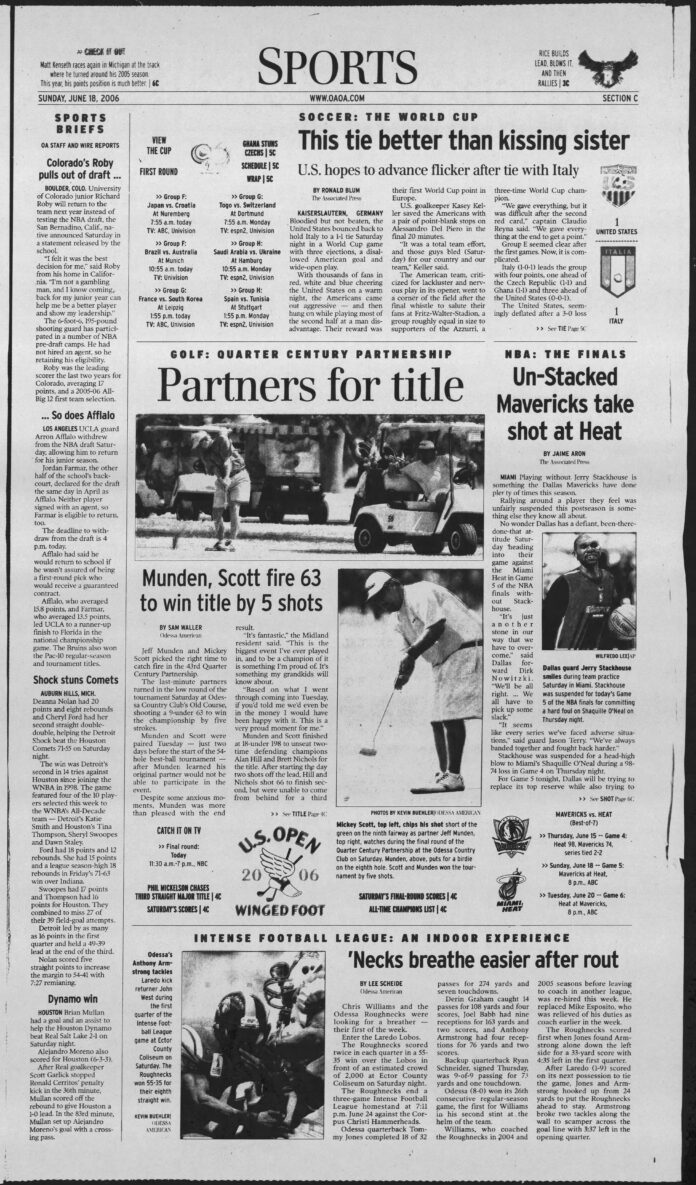 >> 1954: The Odessa Oilers hammered out 17 hits against the San Angelo Colts. Almost every Odessa batter except cleanup hitter Bob Bauer made contact with the ball in the 13-6 victory. Wes Ortiz was scheduled to pitch in the Oilers’ next home contest against the Roswell Rockets.

>> 1970: Only four golfers of the 112 competing at the Men’s West Texas golf tournament broke par at the Odessa Country Club. The winning team, led by Billy Coffey from Fort Worth, sat in first place after hitting a best ball score of 60. … Lee Trevino saw himself and Gary Player as the favorites in the 70th U.S. Open. Both golfers played more practice rounds than other golfers in the field. … The Odessa College women’s tennis team needed a strong showing in doubles matches if they wanted to win the National Women’s Collegiate Tennis Tournament. The Lady Wranglers held a narrow one-point lead over South Florida.

>> 1997: Mindy Myers was named girls cross country and track at Permian. She won 10 individual state track and field titles when she ran at Munday High School and learned of the opening at Permian when she coached her Aledo team at the Region 1-3A Track and Field Championships at Ratliff Stadium. … The NHL expanded to 30 teams, giving Nashville and Columbus their first chance to have professional hockey teams in their cities. … The Midland Angels rallied for a 6-5 win in 10 innings against the El Paso Diablos at home. The victory helped Midland improve to 2-1 in the second half of the season, while El Paso fell to 1-2.

>> 2006: Jeff Munden and Mickey Scott won the 43rd Quarter Century Partnership title by five shots. The pair partnered up two days before the tournament was set to begin. Their 18-under 198 was enough to defeat two-time defending champions Alan Hill and Brett Nichols. … The Odessa Roughnecks secured their 26th consecutive regular-season victory after defeating the Laredo Lobos 55-35 at Ector County Coliseum. Roughnecks quarterback Tommy Jones completed 18 of 32 passes for 274 yards and seven touchdowns. … The U.S. tied 1-1 with Italy in a World Cup game in Kaiserslautern, Germany.