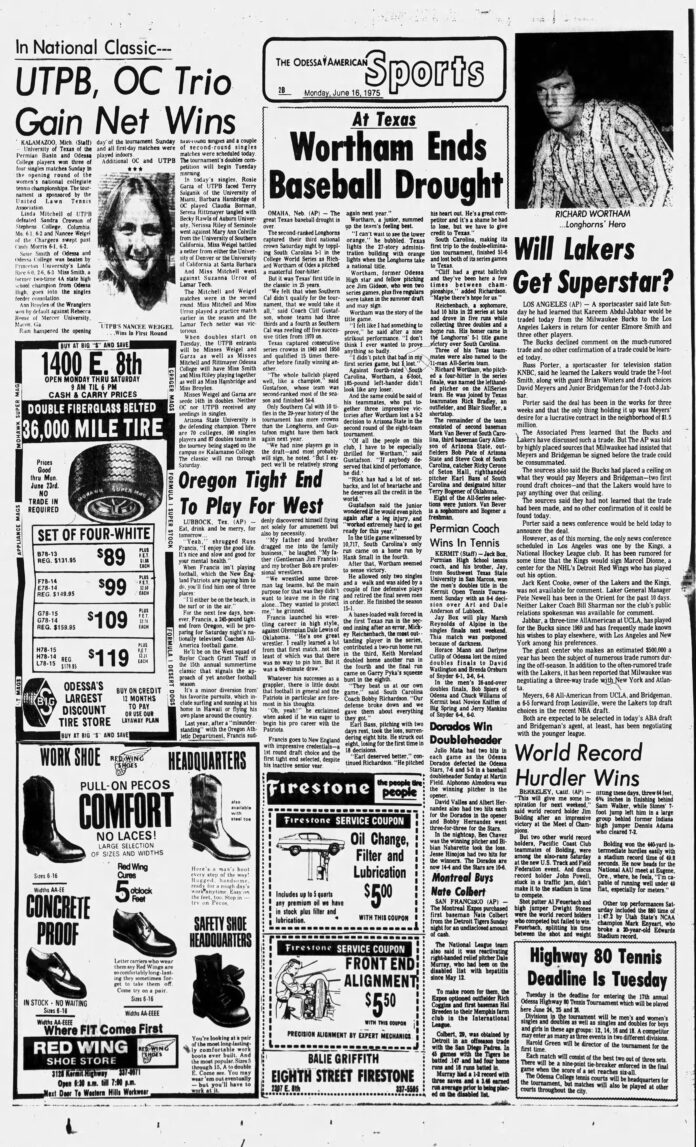 >>1955: The Odessa Eagles were preparing to face the San Angelo Colts in a three-game road series. Odessa sat a half-game behind fifth-place Carlsbad. Odessa was entering the series against San Angelo on a three-game winning streak that was capped off by an 11-7 win over Artesia. … Bill Peacock was looking to challenge France’s Robert Cohen after knocking out National Boxing Association world bantamweight champion Raul Macias in a non-title match. Peacock felt he was ready to face the French boxer after breaking Macias’ jaw in a nationally televised fight.

>>1975: UTPB and Odessa College had a strong showing in the opening round of the women’s national collegiate tennis championships. Players from the schools won three of four singles matches. The doubles competitions were set to start the following day in Kalamazoo, Michigan. … The University of Texas won its third baseball national championship after defeating South Carolina 5-1 in the College World Series. Odessa’s Richard Wortham pitched a four-hitter for the Longhorns. Wortham, an Odessa High graduate, said he couldn’t wait to see the tower on campus lit orange.

>>1993: Odessa College’s Jaime Emiliano and Walter Owens were selected in the MLB amateur draft. Emiliano went in the 21st round to the Cincinnati Reds and Owens was drafted by the Montreal Expos in the 37th round. Emiliano had to decide whether to accept Cincinnati’s offer or return to Odessa College, while Owens was expected to sign a deal with Montreal. … The Midland Angels prevented the El Paso Diablos from winning a first-half Texas League West Division pennant. Midland’s 12-9 win helped the San Antonio Missions make up some ground in the division standings.

>>2004: The Permian boys gymnastics team received national champion recognition for the third time in program history by the National High School Gymnastics Coaches Association. Permian won national titles in 1994 and 1995 and was named national runner-up in 2003. … The Detroit Pistons won the NBA title for the first time in 14 years after defeating the Los Angeles Lakers in five games. A 100-87 win with strong performances from Ben Wallace, Chauncey Billups, Richard Hamilton and Tayshaun Prince helped Detroit secure the championship win at home.