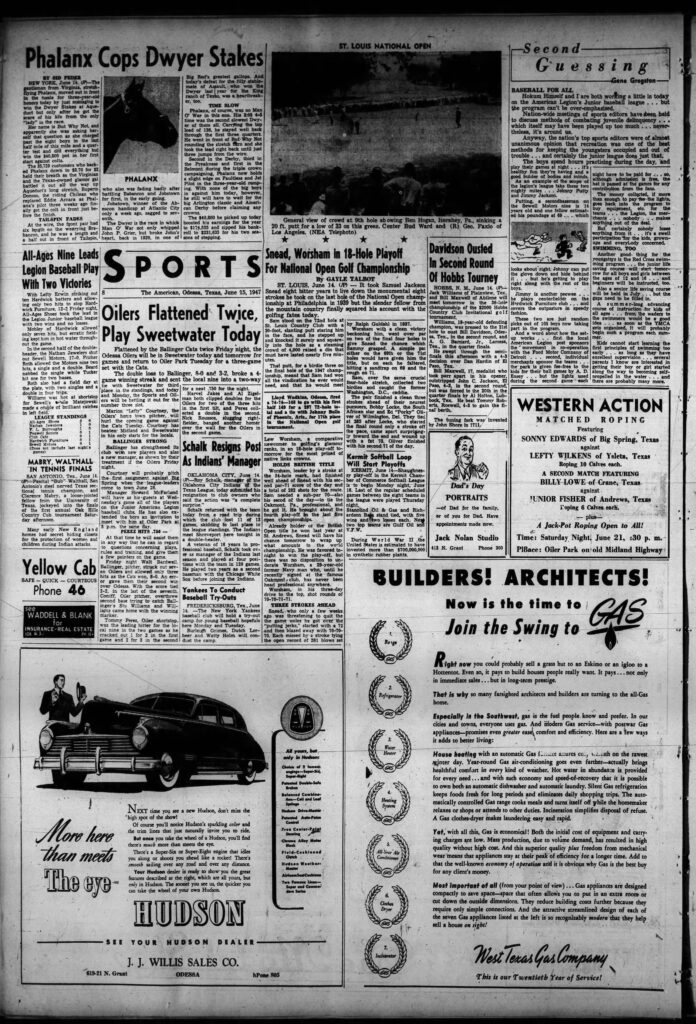 >>1947: The Odessa Oilers lost twice to the Ballinger Cats and were looking ahead to their matchups with Sweetwater at Oiler Park. The team had a 4-game winning streak before losing 8-0 and 3-2 to Ballinger, putting them in a tie for third place in the standings with Sweetwater. Marion Courtney was set to pitch for Oilers against Sweetwater. … Odessa’s Bill Davidson was eliminated in the second round of the Hobbs Country Club Invitational golf tournament. Jack Williams from Plainview and Bill Maxwell would meet in the 36-hole championship in New Mexico.

>>1968: Charlotte Schultz was 36 holes away from her third Women’s West Texas Golf Association tournament victory. The Wichita Falls native secured a spot in the final after defeating Odessa’s Jean Abbott in the semifinals at Odessa Country Club. Schultz previously won the tournament in 1957 and 1966.

>>1993: Scott Karl fired a four-hit shutout against the Midland Angels, helping the El Paso Diablos to a 5-0 win. The victory improved Karl’s record to 5-4 and gave him his second shutout in 13 starts. … The Phoenix Suns were looking to take the NBA Finals series back home with a Game 4 against the Chicago Bulls. Phoenix went to Chicago down 2-0 in the series, but made up some ground with a 129-121 triple overtime win in Game 3.

>>2007: Abilene was well-represented at the Quarter Century Men’s Partnership. The teams of Mike Cotter-Conway Jordan and David Dickerson-Ryan Heller, both from Abilene, were tied for first after shooting 63 during the first round of the competition. … The Midland RockHounds lost 10-7 against the San Antonio Missions, dropping the team 3.5 games behind Frisco in the Texas League South Division race. Midland pitcher Ben Fritz gave up eight runs in the loss, Paul Abraham recorded his fourth save for San Antonio. … The San Antonio Spurs swept the LeBron James led Cleveland Cavaliers in the NBA Finals to secure the franchise’s fourth championship. At that point, the combination of Tony Parker, Manu Ginobili, Tim Duncan and Gregg Popovich was a perfect 4-for-4 in finals appearances.